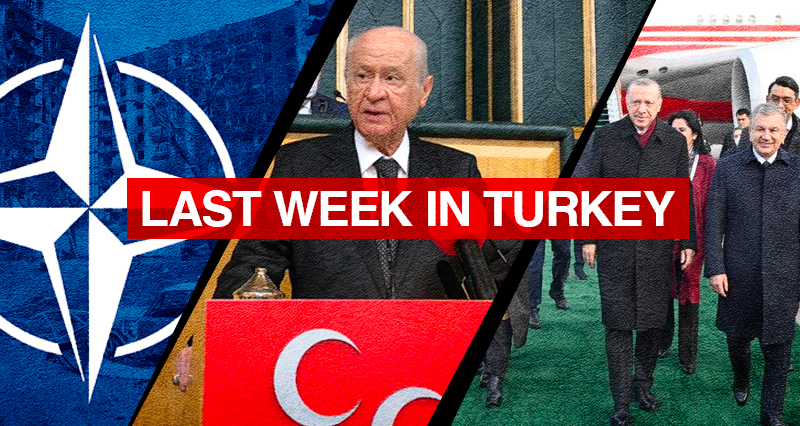 Last week, the main agenda item in Turkey, like the rest of the world, were the developments in Ukraine. Turkish people were asked in a survey whom they considered responsible for the Ukraine crisis. The answer had the effect of a bombshell: “NATO”

The speech of the leader of the Nationalist Movement Party, Devlet Bahçeli, about the US provocation in Ukraine became another hotly discussed subject.

“NATO is responsible for the war in Ukraine”

According to the survey published last week by Metropol, one of Turkey’s leading research companies, the Turkish people hold NATO and the United States responsible for what happened in Ukraine.

74.3% of the Nationalist Movement Party (MHP) voters and 71.6% of the Iyi Party voters surveyed see the United States and NATO as responsible for the war. Despite the results, Iyi Party leader Meral Akşener’s statements supporting the USA and NATO is another remarkable point.

On the other hand, 48.8% of the voters of the ruling party Justice and Development Party (AKP) who participated in the survey stated that the USA and NATO were responsible for the war.

48.2% of the voters of the main opposition party, the Republican People’s Party (CHP), blamed the USA and NATO for the war.

Only 38.6% of the voters of the People’s Democracy Party (HDP), against whom a closure case was filed for allegedly being associated with the terrorist organization PKK, stated that the USA and NATO were responsible.

The results are striking in that they also show the anti-US and anti-NATO orientation in Turkey.

Warning from nationalists about USA’s provocations in Ukraine

In his speech at the Turkish Grand National Assembly on April 7th, the leader of Nationalist Movement Party, Devlet Bahçeli, made notable statements about the developments in Ukraine and especially in Bucharest.

The important parts of Bahçeli’s speech are as follows; “We are in such a period that black propaganda is ahead of the conflicts, at a level that can determine the direction of the wars. It is possible to see this very clearly at the war between Russia and Ukraine (…) The fact that the news of the alleged massacre of civilians and innocent people in the Ukrainian city of Bucha was reflected on the agenda in stormy times is an issue that needs to be examined from all angles, front and back (…) It is not yet clear whether the tragic and heartbreaking scenes encountered 4 days after the withdrawal of Russian troops were a hoax or a real massacre. (…) The Russian Federation administration declared that the massacre allegations in Bucha were fiction and falsehood, as expected. However, countries and organizations with known intentions, from the USA to France, from the EU to NATO, announced that war crimes were committed in Bucha (…)

Unfortunately, there was a constant need for false and distorted news during wars and conflicts. You may remember that chemical weapons were cited as the reason for the invasion of Iraq (…), but the allegations were groundless.

In our opinion, it is either a coincidence or a destructive maneuver that the allegations of the massacre were raised after the negotiation table established in Istanbul.”

Noting that this year is the 30th anniversary of the diplomatic relations of two countries, Erdogan said:

“Turkey is the first country that opened the consulate-general in Uzbekistan. Our Consulate General in Samarkand has been serving our Uzbek brothers and citizens for a year. We have very strong common history, language, belief and cultural ties on the basis of our relations.”

President Erdoğan continued as follows; “I think we will move forward more quickly with our goal thanks to the Preferential Trade Agreement signed today, and 10 agreements have been signed today. The signing of these 10 agreements means that this process between Turkey and Uzbekistan will develop more strongly.”

Drawing attention to the ongoing cooperation between Turkey and Uzbekistan within the Organization of Turkish States, Erdoğan made the following statement: “Today, we also affirmed our will to maintain our solidarity and close contact on regional issues, especially in the Turkish States Organization, in international platforms. We have a lot in common, especially the resources we feed on.” During President Erdogan’s visit to Uzbekistan, a series of agreements were signed between the two countries in the fields of economy, defense industry and construction.