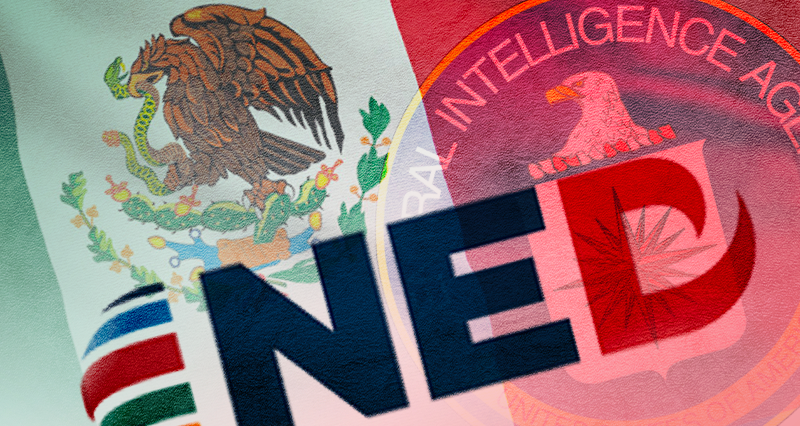 In recent months, Andrés Manuel López Obrador has been criticizing the United States for its interference in the internal affairs of Mexico, due to the financing it grants to various organizations that claim the mantle of “civil society”, but actively participate in the political and media attacks against the López Obrador government.

One of these organizations is Mexicans Against Corruption, directed until recently by Claudio X. González, whose family owns Kimberly-Clark in Mexico, and who has financed the opposition platform Sí por México.

López Obrador’s accusations involve just a small part of the extensive network that the US government deploys against Mexico within the country, and which also extends to other nations in the region.

But while we are aware of the history of the interference on the part of the political, economic, and media elites in Mexico, there is much we do not know about how the money from the United States enters the country for the campaigns attacking the López Obrador government.

Most of it is channeled through the National Endowment for Democracy (NED), created by the Ronald Reagan administration to legitimize the covert actions carried out by the CIA. From 2016 to date, the NED allocated US$8,376,549 to programs in Mexico centered on issues such as democracy, gender-based violence, emigration, elections, and “political empowerment.”

Another institution, the National Democratic Institute (NDI), also created under the mantle of Reagan, the cold war, and the fight against communist guerrillas in Central America has received around US$3 million from 2016 to date for its operations in Mexico. It would be a tremendous exercise in transparency for both the NED and the NDI to declare what the funds have been used for, especially those linked to political programs and the media (which then operate against the government).

But in addition to the NED and the NDI, the Mexican opposition has sought help on other fronts to attack López Obrador’s administration, such as the Cuban extreme right. There we have the case of the far-right National ANTI-AMLO Front (FRENAAA), a self-proclaimed non-violent and citizen movement not tied to political parties, created by businessmen such as Pedro Luis Martín Bringas, Juan Bosco Abascal, and Rafael Loret de Mola.

But the best-known figure of FRENAAA, because he is bizarre and outrageous, is Gilberto Lozano, and we are in a position to affirm that he maintains close relations and coordination with the Miami-based Cuban opposition figure Rosa María Payá, with a view to developing joint actions from Mexico.

These links between Gilberto Lozano, FRENAAA, and the Cuban opposition figure Rosa María Payá flow from Payá’s close ties with the PAN youth, since they all belong to the Latin American Network of Youth for Democracy, a network that has had the National Action Party of Mexico as its main source of financial and human resources, and whose president was Rosa María Payá.

And who is Rosa María Payá? President of the NED project “Cuba Decide,” she has been a figure linked in the last decade to destabilizing elements in the region such as Luis Almagro, Secretary-General of the Organization of American States (OAS), and politicians such as Donald Trump and José María Aznar.

Payá was linked to the July 11 and 12 violent disturbances in Cuba and to the call for the US government to invade the island. FRENAAA had a major and active participation together with opposition elements in the demonstrations at the Cuban embassy in Mexico, where other figures financed by the NED also participated, such as the former far-right PAN congressional deputy René Bolio Hollarán.

René Bolio, president of the “Mexican Commission for the Defense and Promotion of Human Rights”, also has ties to the historical Cuban exile community in Miami linked to State terrorism, and to the Cuban Democratic Directorate (DDC), also implicated in the official call for a military intervention in Cuba.

Therefore, we must put the organizations that in Mexico receive money from the NED under a magnifying glass. One of them, the Mexican Council on International Affairs (COMEXI) implemented the anti-Cuban government program “Voces de Cuba” between 2017 and 2018, with a budget from the NED that last year alone amounted to US$130,000.

Other organizations that receive funding from the NED in Mexico and that are active in subversion against Cuba are the Mexican section of the NGO Article 19, the Institute for Competitiveness (IMCO), the Institute for War and Peace Reporting (IWPR), Amnesty International, Mexicans against Corruption and Impunity (MCCI), and Research and Innovation (Factual AC).

Therefore, President López Obrador is right on the mark when he says that no foreign government should intervene in the affairs of our country, that they should respect Mexican sovereignty. U.S. government financing is an act of interventionism that violates our sovereignty. It is a foreign government and as such, it cannot provide money to political groups of another country.

* Published as column in Mexican magazine Mileno. Translation from Spanish by MORENA International.