“Concept of guarantor state is neither realistic nor feasible” 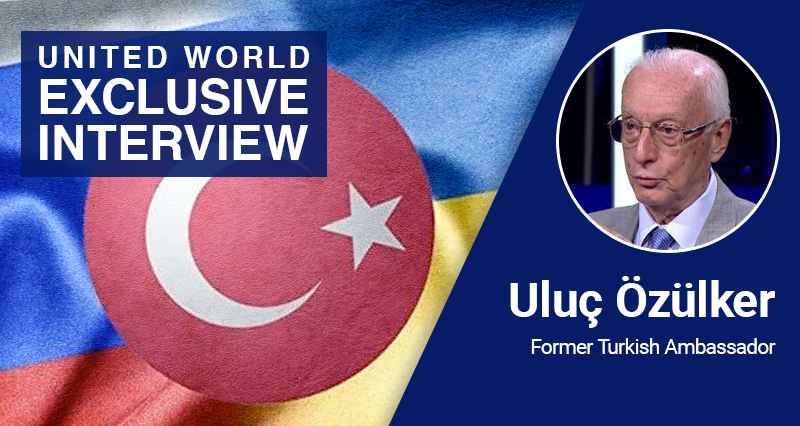 After the start of the Ukrainian crisis, the delegations from both sides have met three times in Belarus for negotiations. After that, Ukrainian and Russian foreign ministers met in Antalya on March 10, and another meeting was held in Istanbul on March 29. These meetings between two delegations from Moscow and Kiev in Istanbul, held upon Turkey’s diplomatic efforts, were a hot topic on the global agenda. Both delegations stated that the ‘most significant progress’ was made during this last meeting.

As an acknowledgement that the current format is not functioning and a new system is needed, the Ukrainian side demanded the establishment of ‘guarantor states’. This proposal has caused a huge controversy. Ukraine is demanding that United Nations Security Council (UNSC) members and countries such as Turkey, Germany, Canada, Poland and Israel become guarantors for Ukrainian border integrity.

The results of the negotiations were considered sufficient for a leader-level meeting. But more difficult issues have not yet been resolved. It is expected they will be discussed at the highest diplomatic level. Turkey, which acts as a mediator, continues to offer both sides hosting negotiations at the levels of delegations, top diplomats and eventually leaders.

We have discussed the negotiations of Istanbul, Turkey’s mediator role and the debates on guarantor states with the former Ambassador Uluç Özülker.

How would you evaluate the meeting in Istanbul? Do you find the diplomatic role of Turkey successful?

We have to note that this has been a very serious success for Turkey. Even the Western public media praised Turkey’s role of Turkey over the negotiations. This is a first. For instance, the French Le Monde newspaper, has praised the role of Turkey. I have been the ambassador to France for more than four and a half years, and I have never heard such praises before. Turkish diplomatic efforts here have been finely appreciated.

As a matter of fact, the entire Ukrainian War is a result of an arm-wrestle between the United States and Russia. It is merely a result of the American policy for the submission of Russia. And the United States preferred to implement this policy by war. So what is the point of further provoking the war? It is the Ukrainian people who are paying the price for the American policy of submission of Russia. But today, everyone except the warmongers is looking to how to achieve the peace. Although the problem here is between the United States and Russia, the solution is between Russia and Ukraine. Since Russia and Ukraine are not in connection during this war, Turkey comes out as the partner where they can achieve peace. And the following points stand out regarding Turkey:

First of all, Turkey is a very important country because of its long coast to the Black Sea and the location of the Turkish Straits. The security of the Black Sea is crucial for both Russia and for Ukraine. And in this context, both countries care about the stance of Turkey.

Secondly, we have seen that Turkey has created solutions in all aspects when it worked together with Russia. Most recently we have seen this applied in the Azerbaijani war with Armenia. Russia just cannot give up on Turkey. This also brings a personal sense of trust towards Turkey. Putin and Erdogan get along well and they trust each other. If a solution is to be brought up about this current situation as well, it is important for Turkey to build trust.

This is today called mediation, but it is actually a shuttle diplomacy: That is, to organize negotiations between two parties that cannot have direct connection, and to try to find a common ground and a resolution as an outcome of the talks. Since there is a sense of trust towards Turkey, it stands out as the country that will ensure positive steps towards this resolution. The negotiations in Antalya were held about 48 hours after Putin and Erdogan talked over phone. Again, after the latest meeting between Putin and Erdogan, the idea of Istanbul negotiations came out. This situation basically shows the weight of Turkey as a country.

This arm-wrestle between the US and Russia is a risk to the entire world. And this has to end in peace. Turkey comes out as the country that can put an end to this under normal circumstances, and these efforts are supported globally. Even in those countries that have previously criticized Turkey’s stance and attitude, this image is now completely reversed. The Le Monde newspaper covered the headline: “The importance of Turkey, which was deemed to be isolated, was revealed.”

Normally, it makes no sense to negotiate if you have no intentions to achieve a solution. The side that agrees to go to negotiations is naturally seen as the one giving concessions. Even a war that is won 100%, ends in peace. And the acceptance of negotiations suggests that both sides are struggling to keep up this war.

Putin did not receive what he wanted, so he started replacing the foreign ministry officials around him. If we list all the costs of the war and the significant economic sanctions, surely he would want to get out of this situation as soon as he can. President Erdogan had a nice message for Putin saying: “Take an honorable step”.

Zelensky, on the other hand, thought that the United States would support them and they could bring Russia on its knees altogether. But that never happened. Neither the United States nor the NATO or Europe ever stepped in. Zelensky has seen that he has been sent as a cannon fodder and realized that trusting them would not get anywhere anymore. Now, Zelensky is looking to reach a resolution by making concessions to avoid his country from being crushed, while Putin looks to avoid the costs of winning by a total destruction.

How do you think the negotiation process will continue from now on?

Turkey has made a very positive move in terms of timing and the environment. Indeed, both sides confirmed to have achieved progress since the beginning of the negotiation process. This is a positive sign. Normally a negotiation would never start from the top level. Instead, it advances step by step. It now appears that a common text of agreement is being negotiated upon. Some issues also need to be decided; such as the political issues like the status of Crimea. There would probably be another round of negotiations for technical details, and then the foreign ministers would finally step in. And the remaining points after those talks can be discussed and finalized between Putin and Zelensky at the highest level.

Of course, it would not be over then, this still is a difficult process. Zelensky suggested that entire agreement would be voted in a referendum, saying that he did not want to hold all responsibility and instead share it with the Ukrainian people. This is a very risky and uncontrollable option. Imagine the people of Donbass did not accept the referendum or the result came negative. What will it be then? Will they go back to war again? Peace is hard to achieve, but it is even harder to maintain it. A step to the establishment of an independent and sovereign Ukraine, will also bring concessions and weaknesses on other things.

What do you think about the guarantorship? Do you find this suggestion reasonable? Do you think Turkey should joint to be a guarantor?

The status they call a guarantor, to me, is not feasible. Becoming a guarantor state would bring interventionism, when it happens in the form of sides in conflict trying to secure them. In the event of a violation by one side, you would also invite the other party to follow the requirements of the agreement. Imagine everything went well for 2 years, but there was suddenly a violation in the Donbass area. You told Russia to get out of the region, but Russia rejected. What are you going to do about it? Are you going to fight? That is not an option.

Turkey is now a guarantor in Cyprus, along with the UK and Greece. So what happened when there was a violation in Cyprus? Turkey went there and intervened. First it tried to talk with the UK, and when the UK rejected, it intervened and protected its own community. Turkey was powerful enough to do so, in the context of the balance of power. And it was also a direct party there.

However, in the case of Ukraine, it seems unlikely that a third party could ever intervene. After the events in Donbass in 2014, Russia and Ukraine made a deal. The Normandy Format was established, and both countries became guarantors. Germany and France were also included in the format. However neither Germany nor France could intervene. So it is important to evaluate this situation in the context of balance of power. In such case, it is not possible for the guarantor to take any actions in reality, outside the international law. Ukraine is trying to involve eight countries on its own accord. It involves Turkey and Israel. All the other powers are the larger powers. That would mean a guarantee of the UNSC. Can you make a move when Russia vetoes on behalf of the UNSC? That is basically impossible. It is very unrealistic for individual countries to be guarantors. And in this context, I do not consider the definition of guarantor states to be actually feasible.