Mines in the Black Sea, optimism at the Bosporus 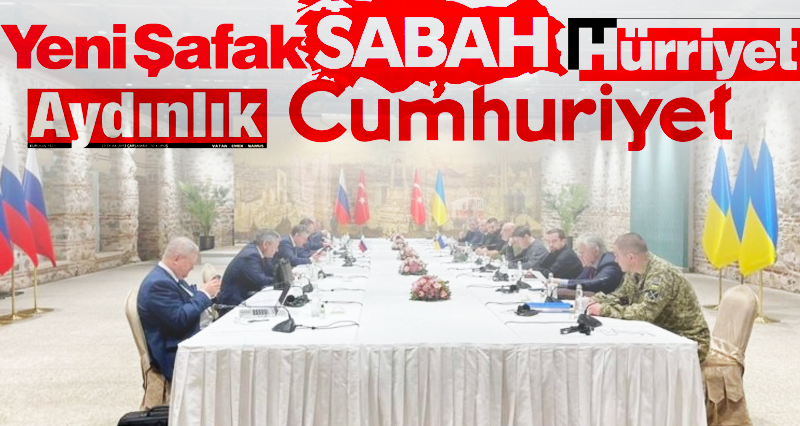 Delegations from Ukraine and Russia met in Istanbul, Turkey on March 29 and continued talks for a negotiated solution for the crisis. The mediating Turkish government and the press welcomed the meeting and its first results with optimism in terms of a sooner than later peaceful solution to the conflict.

“I hope the talks will lead to auspicious results for both countries, the region and the entire humanity. The negotiation process, you conduct in line with the directives of your leaders, has increased hopes for peace and excited the whole world. In this spirit, we wholeheartedly support the talks.”

“We believe a fair peace will have no losers. A prolonged conflict is not in anyone’s interest. Ensuring a ceasefire and peace as soon as possible would benefit all parties. We think we have entered a period when concrete results should be achieved at the talks. Given the current progress, you as members of delegations have undertaken a historic responsibility. The entire world is awaiting beneficial and good news from you. You are laying the foundation for peace in line with the directives of your leaders. We stand ready for all kinds of contributions that will facilitate your work.”

Turkish Foreign Minister: consent and understanding “in some issues”

The Turkish government was present at the opening and closing of the meeting and held contacts to both sides. But Ankara did not directly take part in the talks. Turkish Foreign Minister Mevlüt Çavuşoğlu, commented after the meeting:

“There is a consent and shared understanding in some of the issues. Today’s meeting brought the most meaningful progress since the start of the negotiations. For the process ahead, it is foreseen that foreign ministers of the two countries come together and give the joint understanding its last shape. Following that, a meeting between presidents of the two countries is on the agenda.”

Ukraine’s President Volodymyr Zelenskyy said Tuesday that the latest round of peace talks with Russia in Istanbul, Turkey could be called “positive,” but “the enemy is still on our territory.”

“The signals we hear from the negotiating platform can be called positive,” Zelenskyy said on his Telegram account.

The Chairman of the Ukrainian delegation, Presidential Spokesperson Mihaylo Podolyak said talks were ongoing for a humanitarian cease-fire and added further meetings would be held online. Podolyak said the talks had reached a sufficient level for a bilateral presidential meeting and evaluated the approach of the Russian delegation as “constructive”.

The Chairman of the Russian delegation, Vladimir Medinsky also described the talks as “constructive” and said his delegation had received a clearly outlined position on what Kiev sought to achieve. The written proposal, which includes Ukraine’s pledge to remain a neutral nation and that it will not try to obtain any weapons of mass destruction, including nuclear weapons, will be relayed to Putin, he said.

Coinciding with Medinsky’s statement to the press, the Russian defense ministry announced it was drastically reducing its military operations in some parts of Ukraine, including near the capital, Kiev. The ministry cited “the talks moving into the practical dimension,” as the reason for the change.

Accordingly, a cautious optimist tone prevailed in the Turkish press reporting on the meeting.

The pro-government newspaper Yeni Şafak titled “First decision for a cease-fire: Peace is now closer”. The newspaper said the talks had “opened the path to peace”.

It’s columnist Mehmet Acer, known for very close ties to the government, described Turkey’s past mediation efforts in length and concluded “It seems that an appropriate basis for a limited cease-fire has been found.”

The daily Hürriyet, Turkey’s leading newspaper in circulation, titled: “Good news from Istanbul to the world: Winds of peace in the Bosporus”.

The newspaper’s columnist Sedat Ergin argues the meeting has “indicated that from now on, the path of negotiation will prevail in the crisis”. A serious bargaining has already started practically according to Ergin.

One clear result is for Ergin that “the chapter of NATO membership is definitely closed for Ukraine”. The columnist also adds that Turkey’s position to reject sanctions against Russia and to keep equidistance to both sides of the conflict, insisting on good relations to both has “paved the way to Kremlin’s approval of negotiations in Istanbul and (…) will raise Turkey’s international diplomatic profile” in the times ahead. But, warns Ergin concluding, “we are at the very beginning of a process of resolution and problematic phases still lay ahead of us.”

“US will provoke to hinder peace”

“The greatest danger for peace is the US”, writes Abdulkadir Selvi, another columnist of the same newspaper. He writes:

“We are both very close to and very far away from peace. We are close, because Ukraine and Russia have seen there is not winner to this war. The only winner has been the United States. The losers are Russia and Ukraine. And the price is paid by Russian women and children.”

“It will not be easy to establish peace. And rest assured that the United States will pursue all kinds of provocations to hinder peace. Because that country benefits from the war. Therefore, we have a difficult road ahead.”

Sabah is another high-selling newspaper, and its chief columnist Mehmet Barlas is said to have a direct line of contact to President Erdoğan. In his article of March 30 titled “No way without Turkey”, Barlas first of all concedes a Russian success:

“The new Cold War has carried Russia to the forefront. (…) This operation has turned the Black Sea into a Russian sea. Those who thought Putin was acting without plan, should take a look at the Russian markets. The numbers in Russia are improving in all terms. And we know that, without Russian oil and gas, Europe, beginning with Germany, will have a hard stand surviving.”

Barlas then proposes that “Turkey should focus on its own agenda”. He writes: We are determined to use the gas reserves we have discovered in the Black Sea and the Mediterranean. And we will safeguard our energy security by cooperating with our allies, such as Azerbaijan and Iran. Turkey is wihin NATO a country that is sidelined. We have seen this again and again. The incident of Cyprus is just one of the occasions that confronted us with this fact. But the Republic of Turkey has made a great progress to become a country that follows its own interests independently from the United States. And our position in the last crisis has reconfirmed this.”

Becoming a guarantor state a “mine field”

Barlas concludes that Turkey is “not only the Middle East’s but also Europe’s indispensible actor”.

The oppositional Cumhuriyet newspaper delivered a warning front page. The newspaper referred to Ukraine’s proposal of guarantor states as “mine field”. Citing retired ambassador Ümit Pamir, the newspaper headlined that Turkey becoming a guarantor of Ukraine’s security in a similar way as NATO’s article 5 may force the country into war if a Russian operation occurs in future”.

Other oppositional newspapers such as Karar or Birgün did not carry the Ukrainian-Russian on their headlines.

In contrast to Western media, which doubted the possibility of an agreement, the Turkish media and especially the pro-government newspapers reported with great optimism that the Ukrainian – Russian meeting in Istanbul was a successful step towards peace.