Interior Minister’s statement on Russian counter action to NATO containment; Situational reports on the negotiations between Russia and Ukraine by Foreign Minister and Presidential Spokesman; Opening of the Çanakkale 1915 bridge 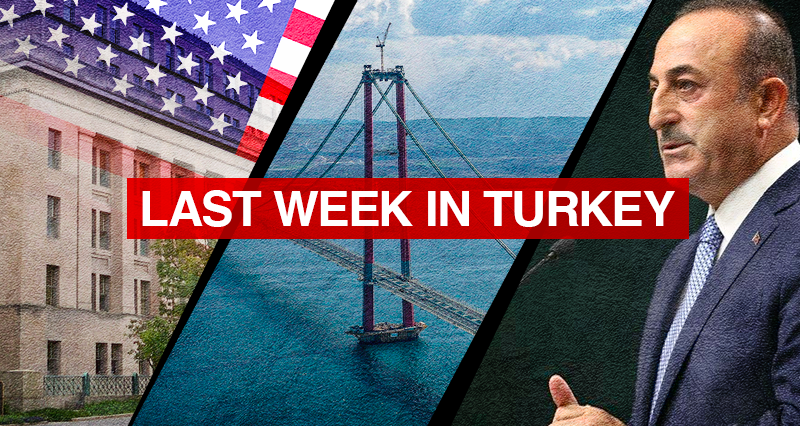 Last week, the public agenda in Turkey had been busy with three main topics.

First, has been Turkish Interior Minister Suleyman Soylu’s statements regarding the counter-actions of Russia against the NATO’s containment policy.

Second, have been the situation reports on the mediation efforts of Turkey in the Russo-Ukrainian War, pursued by both the Foreign Minister Mevlut Cavusoglu and Presidential Spokesman Ibrahim Kalin.

And third, has been the opening of the Canakkale 1915 Bridge, which connects two sides of Canakkale Strait across Asia and Europe.

At the Antalya Diplomacy Forum attended by representatives from around the world, the Turkish Interior Minister Suleyman Soylu has criticized the hypocrisy and apathy of the West, the United States, NATO and the threats to the region. Speaking at the panel titled “Fight against terrorism: What is missing?” moderated by Thomas Wuchte, the Executive Secretary of the International Institute for the Rule of Justice and Law, Soylu stressed the problem of terrorism around the world.

Criticizing the apathetic attitude of the Western world, Soylu stated “Today we call it proxy wars, but my opinion is that this struggle between East and West has been brutal since the day the world started to exist. The West wants put all its problems on back of the East. High-income nations do not want their people to feel the global problems directly. (…) We are in a process where globalization, which was delivered to the world at the end of the 20th century, turns out to be a lie, and is in fact mainly a factor in the proxy wars, civil wars, refugee crises, drug epidemics and even things like cyber warfare and cyber theft.”

The columnist of the newspaper Daily Sabah, Mahmut Ovur, published an interview with Soylu. According to Ovur, Soylu made the following evaluations for the Russian intervention:

“Russia saw the containment actions against itself, by the United States. It first waited a long time to have the right moment to make a move. Russia acted on the weakest moment of the United States and the EU with the consequences of the global pandemic.”

Stating that Turkey has not surrendered to globalization, Soylu said: “If Turkey was to surrender to globalization i.e. the champions’ club, it would have been in a situation much more difficult than what Ukraine experiences today. It has taken steps on its own accord. This is the Erdogan model.”

“Our suggestion to the world is this: You can accept the existence of the United Nations, NATO, global actors and clubs. Do they provide any good? I do not think so. Second, is there even such a thing as Europe? I again disagree that Europe exists as an independent continent. Do not be fooled. Europe is a tool in the hands of the United States. They have to do what it says. They have to behave accordingly. For that reason, the relationship model that we followed by not falling for this mistake in the first quarter of the 21st century, and if the rest of the world also applied it, they would not fall for the same mistake in the aftermath of the pandemic.”

In the aftermath of the Antalya Diplomatic Forum in Southern Province of Antalya, the mediation efforts between Russia and Ukraine were the main focus of the Turkish state diplomacy.

Foreign Minister Cavusoglu made the statements “There is a positive approach on the both sides on the key topics and the critical issues. We especially see that they almost agree on four points. And on some more detailed issues, the decisions must be made at the presidential level.”

The four points that Cavusoglu said the parties had agreed on are as follows:

The Russian side’s demand for “de-Nazification.”

Removal of the obstacles for Russian language to be an official secondary language again in Ukraine.

And Cavusoglu explained the possible meeting between the Russian President Vladimir Putin and the Ukrainian President Volodymyr Zelensky in Turkey by saying:

“We made the offer to mediate before the war started. As of today, in principle, we see that neither side is against it. Some other countries have initiatives; they have efforts to bring the sides together. But we are happy to welcome them to Turkey. It is only about having the dialog, be it in Turkey or elsewhere.”

Cavusoglu stated that he was “very warmly welcomed in both countries during his visits. Both Foreign Ministers welcomed him and were satisfied Turkey honest politics. Both sides trust Turkey.”

Presidential Spokesman Ibrahim Kalin on the other hand, said there were six items on the table. According to Kalin, the remaining two items include the status of Crimea and Donbas.

Ankara, which continues its mediation efforts between Russia and Ukraine, held a high-level meeting yesterday. Russian President Putin and President Erdogan spoke over phone. At the end of the meeting, presidential spokesman Ibrahim Kalin spoke to the BBC.

Sharing details of the meeting, Kalin said Russia’s demands were split in two. “The first four demands that Russia wants are things that Ukraine can easily meet”. Kalin said the biggest issue of these was for Ukraine to maintain its neutrality and not join NATO, while the BBC reminded that Ukrainian President Volodymyr Zelensky had already accepted it.

Other demands in the first category included Ukraine’s disarmament process and it’s showing that there is no threat to Russia, the protection of Russian in Ukraine and the de-Nazification of the region.

“This is very aggressive towards Zelensky, who is Jewish and lost many of his relatives in the Holocaust, but Turkey thinks these demands will be easy for him,” the BBC reported.

On the other hand, it was noted that Putin’s secondary demands could be accepted after a direct meeting between Putin and Zelensky. Kalin did not elaborate on the Russian leader’s demands, but briefly said it was about the official status of the Donbas region in the Eastern Ukraine and the status of Crimea.

Opening of the Çanakkale 1915 bridge

The landmark bridge was opened for traffic on the 107th anniversary of the Canakkale Naval Victory, a key 1915 win during World War I.

In his address, Erdogan emphasized that the bridge, which connects Asia and Europe for the first time over the Canakkale (Dardanelles) Strait, is the longest mid-span suspension bridge in the world.

Three of the world’s 10 longest mid-span bridges are now in Turkey, he said.

“Calculations indicate that this project will contribute €5.3 billion ($5.8 billion) to our economy in production, 118,000 people in employment and €2.4 billion in national income,” he added.

Erdogan said more than 5,000 workers and 740 machines were involved in the construction of the bridge, which started back in March 2017.

He hailed the new bridge as “a main artery of the Turkish economy,” saying it will greatly facilitate the movement of people and goods.

This bridge will enable Turkey to further cement its position as an international logistics hub connecting Europe, the Middle East, Northern Europe and Central Asia, he added.

Shaped to symbolize an artillery shell as a tribute to the legendary World War I Battle of Gallipoli, also known as the Canakkale Naval Victory in Turkey, the spires tower 318 meters (1,043 feet) high.