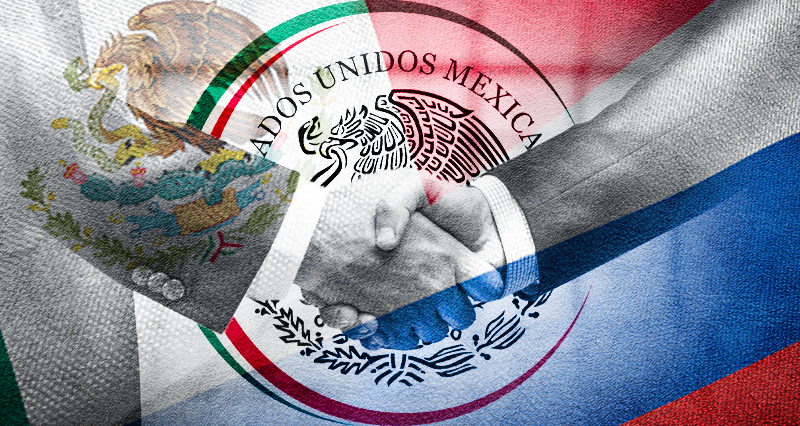 The efforts of the United States to isolate the Russian Federation diplomatically have received a blow from Washington’s southern neighbor Mexico on March 23. Mexico’s Chamber of Deputies established formally a Group of Friendship Mexico – Russia, announced in a ceremony with participation of Russian ambassador Victor Koronelli.

The group was established by proposal of the governing Morena (Movement of National Regeneration) and PT (Labor Party), and Augusto Gómez Villanueva, Deputy from the oppositional PRI (Institutional Revolutionary Party). Villanueva is a very well known Mexican politician, who has been elected to the senate and the chamber of deputies various times since 1965.

Representatives of the right-wing oppositional PAN (Party of National Action) and MC (Citizens’ Movement) boycotted the session and staged a protest outside the chamber, holding “No to war” signs.

Russian ambassador speaks in the Chamber of Deputies

The Russian ambassador in Mexico, Koronelli, held the ceremony’s opening speech. Koronelli said the establishment of this group is “for us a sign of support, friendship and solidarity in these extraordinary times, when my country faced a tremendous media war”.

Stating that his country had a “relation of strategic character with Mexico”, Koronelli qualified relations with Mexico as “one the oldest and deepest in Latin America”. He also expressed his respect for the Mexican government’s position to reject taking part in any sanctions.

The Groups of Friendship between the Mexican Chamber of Deputies and other countries have no formal status and have not been subject to vote. Deputies participate individually in the groups. In the past week, the Chamber also established groups of friendship with the People’s Republic of China, India, Serbia and the United States.

Nevertheless, the timing of the groups’ establishment has been criticized and a postponement proposal was made, including by members of the group itself on March 13. Still, National Coordinator of the Labor Party, Deputy Alberto Anaya Gutiérrez called for the establishment, where the Chairman of the Chamber’s Committee for Foreign Relations also took part.

Speaking on behalf of Morena, Deputy Armando Contreras Castillo stated that in “the last century, the Soviet Union has proved Karl Marx wrong, who had expected the first socialist state to be established in Britain. They sent a strong message to us with a new way of thinking society and economy, a new way of understanding the world and life.” Also mentioning the Soviet Union’s victory over fascism in the Second World War, Castillo concluded “our goal is today to strengthen Mexican-Russian relations. We are ready to do everything to fortify the friendship between Mexico and Russia and establish new ties.”

The Chairman of the Group of Friendship, Deputy Alberto Anaya Gutiérrez stated the following:

“Mexico is a country of peace. Our country stands for the path to solve all conflicts by way of dialogue and diplomacy. Mexico keeps on insisting for the people’s right of self-determining their government and the principle of non-intervention.”

Anaya Gutiérrez reminded that Mexico had recognized the Soviet Union diplomatically in 1924, being the first country in the Americas to do so. He also added that Alexandra Kollontai was the first Soviet ambassador to Mexico and the first female diplomat in humanity’s history.

The leader of the Labor Party then commented on the current relations with the Russian Federation, stating the following:

“Recently, the Foreign Minister of the Russian Federation, Sergey Lavrov visited our country and we have celebrated the anniversary of the begin of diplomatic relations. Today, Mexican – Russian commercial relations are growing. We have today a trade volume of 4.783 million dollars.”

“In accordance with article 89 of our constitution, our President López Obrador instructed our Foreign Minister Marcelo Ebrard to explicitly express that we were not going to take part in any sanctions of economic or other character.”

In relation to the Ukraine crisis, Gutiérrez said:

US ambassador: “This cannot happen”

Criticism came unsurprisingly from Ken Salazar, US ambassador to Mexico. “This cannot happen”, said Salazar, who called Mexico to abandon neutrality and be on Ukraine’s side.

In the ceremony for the establishment of the US-Mexico Friendship Group, Salazar stated: “Yesterday, the Russian ambassador was here (Chamber of Deputies) and pretended that Russia and Mexico were close. Sorry, but this can never happen. This can never happen.”

Comparing Mexico and the US to a “family”, the ambassador said “there cannot be differences among us, our countries need to do what they did in the Second World War”.

Morena’s coordinator in the Chamber of Deputies, Ignacio Miel – present in the ceremony for US-Mexican group of friendship – responded by calling “not to distort our country’s position.” “We have condemned the Russian invasion of Ukraine decidedly. The establishment of groups of friendship doesn’t change that in any way.”

Another harsh criticism on the establishment of the Mexico – Russia friendship group came from the Ukraine’s ambassador. Oksana Dramarétska called the group’s establishment a “shameful act”.

The Mexican Chamber of Deputies also had drawn attention when it commemorated in an official ceremony the passing away of Karl Marx on March 15.