The hypocrite civilization has already decided in your name 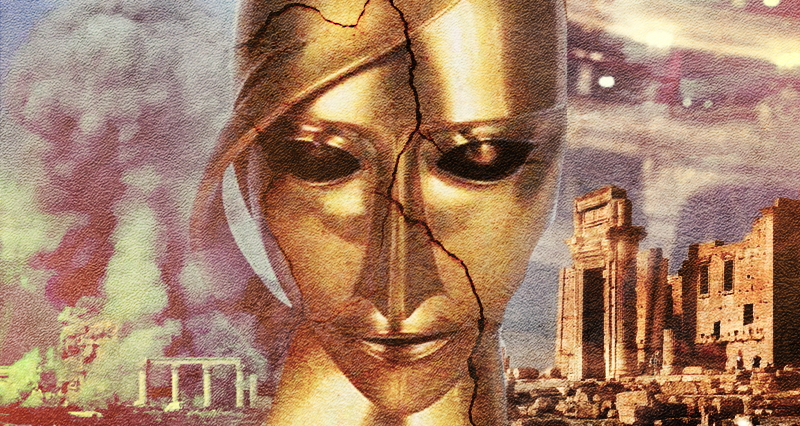 It has been quite some time since we started to read news about the reflections of the Russo-Ukrainian War on art. Russian artists are becoming subject to mass deportation in America and Europe, their concerts are being cancelled, and they are forced to resign from their duties. Russian films are censored off from film festivals, while live performances are being forcefully removed from the programs. Courses that include famous Russian authors are being removed from curricula of “free” universities. The list is going on and on, and just as I expected, it is now going to include the plastic arts as well. The Amsterdam Hermitage Museum in the Netherlands is now shutting down its exhibition “Russian Avant-Garde: Revolution in the Arts”. The trend reaches even the point of art vandalism, with Molotov cocktails being thrown at the Russian Culture Institute in Paris.

One of the Russian artists heavily affected by this carnage is Tugan Sokhiev. The Capitole Orchestra in France is putting pressure on Sokhiev to “express himself for peace”. A point that Sokhiev has already emphasized with the expressive power of the arts: “… We artists are constantly reminding the horrors of war through Shostakovich’s music.” Sokhiev’s statement was not deemed strong enough, and being a Russian artist, he is forced to resign.

Has anyone demanded from American artistst to “express themselves for peace” in face of America’s brutal occupations and massacres?

Somehow, no one demands from American artists to “express themselves for peace” for America’s brutal occupations and massacres. No one is expelling Israeli artists for Israeli occupation over the Palestinians over 47 years. Have you ever heard of Hollywood movies being censored, or the concerts of the Israeli Philharmonic Orchestra being cancelled?

Let us go back into history a little bit. No one ever expelled academics and artists like Robert Vorhoelzer or Rudolf Belling – who had left Nazi Germany just before the World War II and migrated to Turkey- just because they were German. No one canceled their heavily German-influenced projects or the Bauhaus école. No one fired Joseph Albers, a Bauhaus école academic and artist who migrated from Germany to the Yale University in the US during the peak of Nazism, only because he was German. On the contrary he was even granted a citizenship. What about the German painter Otto Dix? He fought in the German Army (albeit involuntarily) during the World War II. Is there any museum today that would not accept Dix’s paintings? Did Goethe, Bach, and especially Wagner, ever got banned? Has anyone censored Dutch art for the disgrace of the Dutch “peacekeeping” forces, the main actors of the massacres in Bosnia? No one has ever spoke about the art and the artists of France, whose undeniable “great” role in the Libyan occupation causes nearly 4-5 thousand refugees to drown in the Mediterranean every single year.

On the quite contrary, the situation was much different for the tragedies in the Eastern World. The art works that horrendously used the tragedies of wars in the Balkans, the Middle East and North Africa have even all been applauded. Performance artist Ai Weiwei, who took part in the Berlin Film Festival, presents a good example. His performance was about a re-enactment of the tragic image of “Aylan Baby”, a three-year-old Syrian toddler who was drowned at sea. Aluminum sheets, used to protect the refugees rescued from drowning or from hypothermia, were presented to the spectators as part of the installation show. The event, which was in complete ignorance, was more of an amusement than creating an awareness to the subject, and the guests entertained themselves with their selfie shots and with their re-enactment life jackets over their chests.

Separation of artists and their works in the West

To this date, Western artists have always been separated of the actions of their countries, which caused great tragedies over the “world of darker complexions”. The Western artists were not only isolated from what their countries have done, but were also separated from their own inner morals. Their personalities weren’t important, only their arts mattered. For example, the works of Egon Schiele, who was arrested for pedophilia, have been found even in the most prominent museums, and the typeface “Gill Sans”, created by the calligrapher-designer Eric Gill, known for his incest and zoophilic relations, has become one of the top 4 most used document font used today.

Therefore, we can see that the moralities, ideologies, identities and nationalities of the Western artists are exclusively kept separated of their arts, and their works have taken their places over the shelves. However when these tragedies are directed towards the West, the situation gets different: such as depreciating the Russian artists and targeting them over their Russian nationalities.

And let us also take a look at the reactions we here in Turkey have given over this art expulsion. This art purge has received harsh reactions from institutions such as the Turkish Artists Association, and from intellectuals such as Tulughan Ugurlu and Ilber Ortayli. Others remained silent on this purge of art.

Having the largest membership in Turkey, the International Plastic Arts Association has given a statement on the war between Russia and Ukraine. The statement explained that the association did not sided with a part in the war, but also criticized Russia. However, there is something odd here: The association, whose members are all artists and that is focused on art, expresses an opinion on an international issue, but remains somehow silent about the purges on art. Perhaps it might be questioned in that silent stance, that the argument of “the maintainability of the art as the tragedies of the war continues”.

I have objections to that question at few points. Firstly, this art purge is directly related to the war itself. The second point is, as Sokhiev also puts it, the approach is “using the arts and cultures to divide and ostracize people and nations”. This statement from Sokhiev is especially important. As a result of that, communities that are even united in religion, ethnicity and language can be segregated culturally. Just as it was requested from Sokhiev, entire societies can also be requested to “choose one cultural tradition over the over”, namely the East and the West.

Will Ukraine be requested to choose between Beethoven and Tchaikovsky?

Perhaps soon, Ukraine will be requested to choose between Beethoven and Tchaikovsky, or Victor Hugo and Dostoyevsky. Therefore, it is clear that this wicked culture ideology, which began with purges on art, will not bring peace.

The third point is that we all know what an important role art plays in the geographies that often face the reality of war. Art is the morale value of the humans, and sometimes, it can manage to fix internationally ill relations that other factors cannot.

On our trip to St. Petersburg back in 2011, we have also visited the cemetery of those died during the Nazi siege of Leningrad (current name St. Petersburg) during World War II. I noticed an old black-and-white photograph in the small museum at the entrance to the cemetery. There were lots of people standing in a very long line in the photo. At first, I thought it was a line for bread rations. I asked Mehmet Perincek, who was showing us around, to translate the Russian text under the photo. The line in the photo turned out to be a line for tickets to an opera show. That long line was a clear proof of how vital art is, just like the bread or clean water, even in the most difficult times of siege.

Art is used for cultural segretation

Unfortunately, from the examples given above, we see that today art is used as an instrument for cultural segregation. But was art not deemed to be universal? Is Russian culture not one of the main pillars that ensure the universality of art? Cancelling the Russian culture is quite the equivalent to destroying the universal artifacts, such as the Bamiyan Buddhas being destroyed by the Taliban or the ancient artifacts being destroyed in Palmyra, Syria, by ISIS. Of course, Western art institutions will eventually step back from this mistake. However, this shame will remain as a black stain for the cultural institutions of the “civilized” West.

* Caner Karavit is professor of art in Istanbul’s Mimar Sinan University, teaching in the fundamental art education department. Karavit has published several articles in Turkish and international media, while also working as an artist and realizing several national and international exhibitions. Between 2013 and 2015, Karavit has stayed in China to pursue theoretical and practical strudies on Chinese painting. He is specialized on fundamental art and design education, authentic printing, traditional Chinese painting, Far East Asian art, comparative theories of composition in the West and the East.