Either the ‘Strategic Compass’ of the EU or the Eurasian Alliance 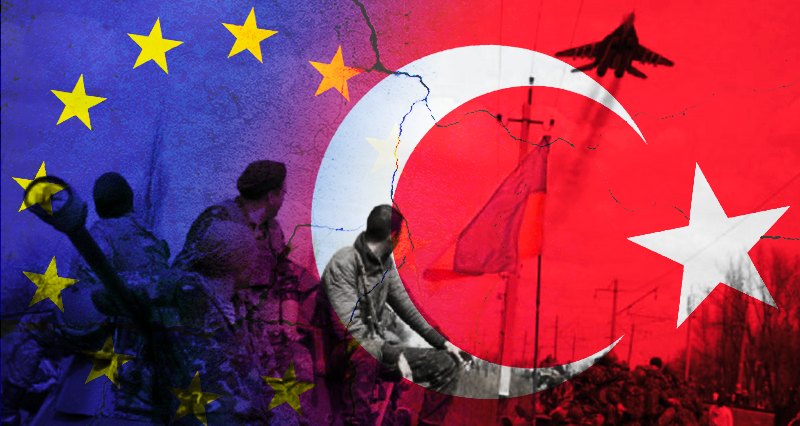 The European Union’s (EU) document titled “A Strategic Compass for Security and Defense” was approved by the European Council on Foreign Relations (ECFR) on March 21st 2022. By approving this strategic document, the European Union has officially declared its complete rejection of Turkey’s and the Turkish Republic of Northern Cyprus’ (TRNC) maritime claims in the Eastern Mediterranean.

The Turkish Ministry of Foreign Affairs reacted to this strategic document with an official statement the next day:

“We learned that the EU’s Strategic Compass was approved at the Foreign Affairs Council yesterday (21 March).

Notably the chapter in the document on the Eastern Mediterranean where our country is referred to seems to have been dictated by the two members of the EU who have maximalist maritime boundary claims at the expense and persistent denial of the rights of Turkey and the Turkish Cypriots. This chapter fully contradicts international law, practice and even the EU’s own acquis; as such it is disconnected from reality. As the document fails to show the right direction, it cannot function as a “compass” nor can it be dubbed “strategic”. This document will undoubtedly make the EU part of the problem rather than the solution in the Eastern Mediterranean and not steer the Union to the correct strategies.

Taking into account the latest developments, it is unfortunate and non-visionary for the EU that the document misses the truth and reality and sees a candidate country and a NATO Ally from such a shallow perspective.”

End of the dream of Europe

The approval of the “Strategic Compass” in the EU makes it clear that Turkey’s dream of Europe is over once and for all. From now on, a EU membership can never be the “strategic goal” of Turkey. The reason is obvious: The Turkish strategy of becoming a fully independent power and securing a fair share of the natural resources in the region is strongly contrary to this strategic compass of the EU.

Everything is crystal clear! It is another subject whether Turkey will ever become a member of the EU. However, let alone granting Ankara membership, Turkey is already within the candidacy asked to give up on the TRNC and the “Blue Homeland”, which are guarantees of Turkey’s existence. Moreover, the EU sends Turkey a dictating message upfront, saying “don’t even think about anything else!”

Greece is a NATO ally, Turkey is not

On the other hand, according to the EU’s strategic compass document, Greece is a NATO ally, whereas Turkey is not considered one. Almost all NATO member states have their approval on that document.

At this point, it is also necessary to correct that mistake that the Turkish Foreign Ministry has made. It is not Greece and Greek Cypriots who have taken this decision. No! Their roles cannot go beyond of being mere pawns. This strategy is directly dictated by the United States and the imperialist powers of the European Union, which Washington tries to keep under its control. Their aim is to completely abrogate the TRNC in the Eastern Mediterranean, and to restrict Turkey to its coasts.

Importance of the policies on Ukraine

And many great powers have joined together to implement that goal. That is why Turkey needs a network of international alliances to prevail over this danger in the Eastern Mediterranean. Turkey needs Russia to balance out this threat.

Here in this sense, our policies on Ukraine are becoming more important. The situation is evolving to the point we have always discussed: The Eastern Mediterranean and the Black Sea are united as a single front. Taking Russia on its side in the Eastern Mediterranean, Ankara could also toss away the EU’s “strategic compass”. The TRNC could become a country officially recognized by important powers including Russia, in the international arena.

Russia has paid the price upfront

There are no more rules for Russia. They were pushed out of the so-called international law. At this point, Russia is considered a “pariah state” in the eyes of the Western world. So if Russia takes a step to recognize the TRNC, no one can say or do anything. They have already undertaken severe steps against Moscow and are still preparing new ones. They attempt to exclude or remove Russia from the Western dictated system. Moscow can now take any step it wishes towards the TRNC. It has already paid the price upfront.

Ankara should now focus at the EU’s strategic compass and distinguish “friend from foe”. And it must also plan how and with whom it would balance out the threats coming from the foes.

The slogan of “No to NATO, no to Eurasia” is the capitulation to Brussels

At this point, it is necessary to ask those who use the slogan “no to NATO, no to Eurasia”. They say they are against dictates of the West, and claim to support the Blue Homeland. But concerning the Blue Homeland, all the EU members are standing against us. And it is certain that the US is behind them all. All of them have signed the strategy of complete abrogation of Turkey and the TRNC in the Eastern Mediterranean under the name of “Strategic Compass”.

They are all ready to implement this strategy by all means, including arms. After all, the compass also declares that the establishment of a 5,000-strong Rapid Deployment Capacity has been agreed upon. Therefore, this Strategic Compass targets Turkey not only politically but also militarily Let us also not forget the US-centered recent military activities in the Eastern Mediterranean.

It is now up to Ankara to make the right decision

Greece is basically the Ukraine of the Eastern Mediterranean; and Ukraine is the Greece of the Black Sea. Behind both these countries lies the “Strategic Compass”. It should be noted that Ukraine’s Zelensky would also sign this document if he could. If the “Strategic Compass” prevails in one front, it would also do so in the other. If it is overruled in one side, it also does so in the other.

It is now up to the stance of Turkey. Ankara will determine which option comes forth.