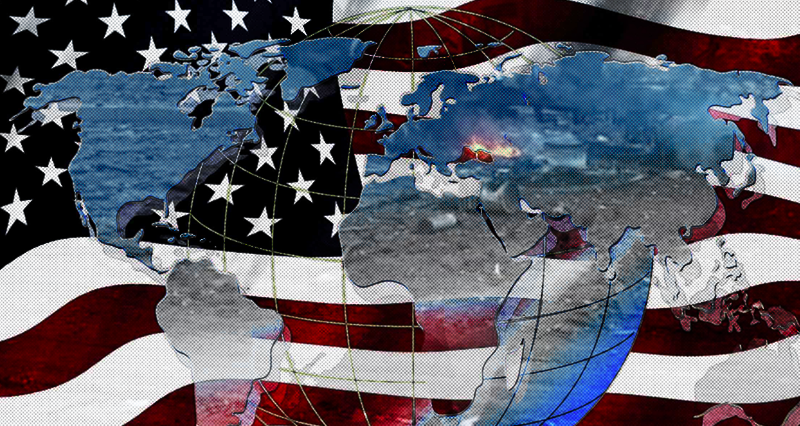 United World International expert Mehmet Perinçek provided an interview to the Iranian Mehr News Agency on the Ukrainian conflict, Western claims of a unipolar world, the emerging racism in Europe.

Below we present the interview as published by Mehr news agency. Subtitles were set by UWI. The original interview can be read here.

The clashes between Russia and Ukraine that started over the issue of the separatist Donbas region have been ongoing for days now.

On February 21, Russian President Putin signed a decree recognizing diplomatically the independence of the Donbas and Luhansk regions located in the East of Ukraine.

Having been mounting up military at the Ukrainian border since last November, Putin announced the commencing of a special military operation directed on the Donbas in Ukraine’s east on February 24. This operation turned the world into turmoil and sanctions were announced in response one after the other.

Ukraine is very important for Russia, because any NATO existence in this country at the borders of Russia is inacceptable for Moscow. Accordingly, Ukraine’s NATO membership is considered by Russia as a possible threat.

Do Europe and the US want to turn the conflict in Ukraine into a war of attrition in your opinion? If so, what is their purpose?

It is first of all necessary to emphasize that the United States produced the crisis in Ukraine in order to keep alive its project of a unipolar world. In order to maintain and strengthen its global hegemony the United States tries to force countries such as China, Russia, Iran and Turkey to kneel down and to obey to its plans –countries that all have their own imperial and statehood tradition and that command strong armies and big economies. The US is encircling them for that purpose. Since the 1990s, NATO has expanded 5 times and has arrived the borders of Russia, creating a situation that threatens Russia’s national security. Therefore, what occurs today in Ukraine is one chapter of this broader US aggression. The United States is not only encircling Russia, it is not only encircling Iran and Turkey, it is at the same time advancing an operation that targets Europe as well with this current Ukraine crisis. Its purpose is to disrupt the developing Russian-European relations. This is due to the reason that the US wants to impede the appearance of Europe as a separate pole, a pole that might enter into competence with it. Hence, it is using the threat of Russia, it is frightening Europe with Russia and it is trying to stop the breakaway of its allies within NATO.

US’ aggressive policies are the main reason for the crisis

Therefore, the US’ aggressive policies are the main reason for this crisis. At the same time, one needs to emphasize that the Atlantic front is losing worldwide. It has been unsuccessful in Afghanistan; it’s plans for a colored revolution in Kazakhstan have been foiled; it did not achieve its goals in the Middle East; it has not succeeded in dividing the great countries of the region, such as Turkey and Iran.

When we take a look at the Ukraine crisis, we observe the following: The US and the West is not playing the determining role, quite the contrary, facing Russia’s act to defend itself, they find themselves pretty helpless. They are not able to provide military support to Ukraine, so much that even the Ukraine started complaining about this and stated openly that the US and NATO have become incapable to act. Within that context, the US and Western-imposed economic sanctions will also not yield any results. Sanctions will not play an important role against this Russian act of defense.

We have seen this in the past, with Iran being an important example of that. The sanctions imposed on Iran have not succeeded in forcing Iran to kneel down in any way.

Russia may in the short term experience some economic turbulences, but in fact, it gets an opportunity develop its own national economy and its own production, to establish a new banking system and to put an end to the global hegemony of the US dollar.

More than half of the world’s population rejects US sanctions

A glance at the world map and the countries that are not following the US sanction regime shows the following picture: More than half of the world’s population, more than half of the global economy and also, in terms of territory, more than half of the globe does not follow the US sanctions regime. Therefore, the US is not leading nor dominating in that sense, and Russia’s operation has become a clear announcement of the establishment of the multipolar world. Future history books will define the Ukraine crisis in these terms and as such a historic event. The only weekend and damaged matter here is the US project of a unipolar world.

In the recent days, reports are spreading around that terrorists are being transferred from Syria to Ukraine. What do you think about this matter?

I have already stated the purposes of the Ukraine crisis: The first goal is to encircle Russia and the Eurasian countries. The second goal is to open a gap between Russia and Europe and thus to control Europe. Another goal in the crisis is of course to disrupt and sabotage the Turkish-Russian relations and to create a conflict between the two countries. The United States’ plans in the region are all built upon disrupting the Russian-Turkish cooperation. A Russian-Turkish alliance will foil all US plans and bring regional peace, stability and economic development to the region. Therefore, it is also intended to use the Ukrainian crisis to disrupt Turkey’s relations with Russia. I had pointed to that US plan a long ago and emphasized that certain groups may be transferred from Syria to Ukraine without Turkey’s knowledge, thus preparing the ground for a provocation that attacks the Turkish-Russian relations severely.

Turkey’s national interests rely on foiling US plans in Ukraine

Now, different terror groups from Syria might be transferred to Ukraine currently, but be we can say very clearly and definitely that this does not take place under Turkey’s control. The exact opposite, such a transfer constitutes a huge provocation against Turkey as well. Turkey’s national interests depend on foiling the US plans in and over Ukraine, because Turkey is being encircled by the US in Syria, the Eastern Mediterranean, Aegean Sea and Thrace and a US presence in Ukraine would be part of further surrounding. Therefore a US defeat in Ukraine is in favor of Turkey. Only if the US is defeated in Ukraine can Turkey progress its struggle against the PKK/PYD to full success. Only then can Turkey fully realize its national interests in the Eastern Mediterranean and ensure its national security in the Aegean Sea and Thrace. Therefore, Turkey’s national interests coincide objectively with those of Russia, and Turkey acting together with Russia to foil US plans will benefit both countries.

In the recent years, several wars have taken place including in Syria and Yemen, where thousands of people were displaced but the international community remained silent. The situation in Ukraine is different. Since its very beginning, international organizations, human rights organizations and Western media are deeming a very great importance to the issue of Ukrainian refugees and the consequences of this war. How do you evaluate this?

Everybody very well knows the West’s hypocrisy and double standards. The Western media and public opinion has closed eyes and ears the civil war that was ongoing in Ukraine in the last 8 years. In the Donbas region, civilians were targeted by Ukrainian forces and had to flee during the last 8 years. In addition, the Neo-Nazi forces that came to power in Ukraine in May 2014 have applied fascist policies in Ukraine and subjected the people to politics of repression.

Until today, the Western media has not spoken about children and women dying in the Donbas region nor has reported about the policies of repression inside Ukraine. The West never has made any mentioning of those people who suffered these policies. And today, they show again – as always – their hypocrisy and their double standards by talking of human rights.

In addition, to the reasons mentioned above, it is also the West’s fault that Ukrainians are displaced today and there is a wave of migration. The West and the US have provoked Ukraine upon Russia and have turned the country into a battering ram, thus causing the current situation. Taking part in US plans has made Ukraine suffer. Therefore, the US is primarily responsible for displacement and migration.

The same goes for the conflicts in Syria and Yemen that also caused migration waves. We can state clearly that Western imperialism is responsible for the thousands of tears of people displaced all over the world.

Notwithstanding, the West, which supposedly sheds tears for these people’s tragedies, at the same time, displays racist, fascism-like approaches towards Russians living in Europe. Russian students are expelled from the schools they are studying at. Artists, directors, writers who are working in the West are laid off. All events connected to Russian culture are cancelled. The Dostoyevskys and the Tolstoys, all that is connected to Russian culture is trying to be erased from European Universities and cultural events. Therefore, one should not be fooled by this European hypocrisy. All these racist measures and sanctions imposed on Russians are evidence of that.