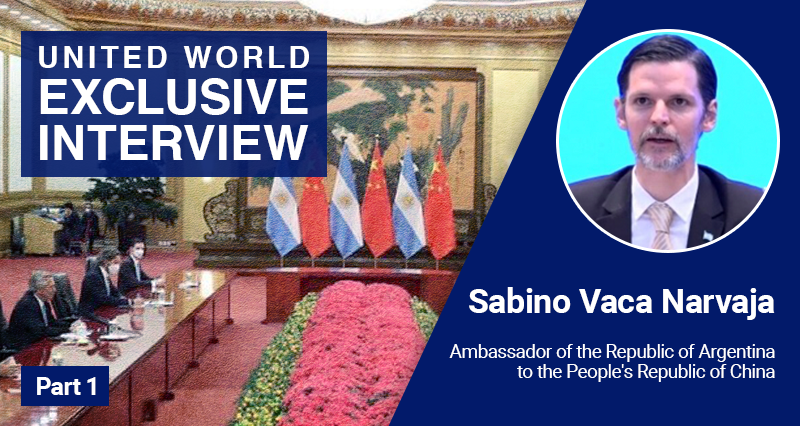 Argentina joined the Chinese Belt and Road Initiative in February 2022. Argentinian President Alberto Fernández visited the People’s Republic of China in February 2022 and signed an according agreement. The country’s Ambassador to China evaulated on Argentina’s participation in the initiative.

Argentina has become thus the biggest Latin American economy till today to join the initiative. But what does the participation mean from the Argentine point of view? What is the content of current cooperation between Argentina and China, and what are its perspectives?

I interviewed the Ambassador of the Republic of Argentina to the People’s Republic of China, Sabino Vaca Narvaja on these questions and more.

In the second part of the interview that will be published tomorrow, Ambassador Vaca Narvaja elaborates on Argentina’s negotiations with the IMF and the role China played, the Chinese – Russian alliance from an Argentine point of view, his country’s stance on sanctions against Moscow, the comparison of the Malvinas and Taiwan and the global trend towards multipolarity.

The perspective on taking part in Belt and Road

Argentina has agreed to participate in the Belt and Road. What is the general vision of the Republic of Argentina when taking this step?

The balance is very positive. This step is first of all going to allow access to financial resources for the development-oriented infrastructure works that Argentina needs to grow. That has become evident in the agreements signed by Argentina in the framework of President Fernández’s recent visit to China. But beyond that, the participation in Belt and Road also includes new resources for the encouragement of trade and investment, implied by this framework.

By participating in the Belt and Road, Argentina gains access to the Chinese regional space, a sphere to which we had difficulties to access to till today. At the same time, the participation must serve as an export platform for the rest of the Asian countries that take part in the Initiative. I want to highlight the fact that some of the Chinese provinces have markets, financial systems and technological advances of equal or greater weight than many countries in the world.

So far, the Argentine trade balance with China has been in deficit. We have to resolve that commercial gap and that is what we are working for. It is important for our country to export added value and being part of this megaproject can help win new markets for products in which Argentina is highly competitive and has advanced development. For example, there are areas that are a high priority for China such as biotechnology, nanotechnology, digital information services, software and other branches linked to knowledge economies. Here, the exchange of experiences in technology transfer with China is central. Several private companies and state agencies such as Nucleoeléctrica Argentina, ARSAT, IMPSA, CONAE, NUCLEARIS, SPACESUR and others have a connection to Chinese counterparts and have deepened that relationship.

Technology transfer works in both directions

To provide an example, Jiangxi Nuclear signed a cooperation agreement with the company INVAP to build a reactor for the production of medicinal radioisotopes in China. In this case, Argentina transfers technology to China. But we are also advancing in other projects where there would be a transfer of technology from China to Argentina, as in the case of electromobility. Electromobility is a priority area for the government of President Alberto Fernández.

Argentina has enormous potential in mining. Concretely, our country has the second largest lithium reserve in the world. For Argentina it is important to export raw minerals, but exports become even more important when they cover the value added goods. As I have been pointing out in different interviews already : this is the key to the economic development of the country. We must industrialize lithium by setting up battery factories. But we also need to advance manufacturing electric vehicles, as we already have a significant established capacity in the automotive industry.

During the visit of the Argentine President, several bilateral agreements were signed. In your perspective, which are the most important and how do you expect relations to develop? Some agreements resemble those already signed during the Kirchner government. Do you think they now have a better chance of being carried out?

I start by answering the last part of your question. The political will exists, as before during the Kirchner government, to realize these projects. They are projects that are related to infrastructure works that Argentina needs in order to grow economically. China has committed financial assistance for a series of initiatives that will allow Argentina to have, in the med-term, the necessary infrastructure to provide greater dynamism to the economy. Especially after four years of stagnation due to erratic economic policies and having subsequently gone through the recessive effects of the crisis resulting from the covid-19 pandemic. It is also necessary to remember that several of the projects that we are re-launching were stopped during the previous government of Mauricio Macri due to repeated pressure from the Trump administration.

Concerning the agreements reached by President Fernández, which mount to a sum close to 23.7 billion dollars: a first tranche of the agreement signed under the mechanism of the Strategic Dialogue for Economic Cooperation and Coordination (DECCE) over 14 billion dollars has already been approved in the mentioned currency.

Within the set of projects approved for this first section, the construction of the fourth Argentine nuclear power plant, Atucha III, stands out. This project is of great importance since, like the Patagonian dams, it is one of the largest that China is going to carry out in Latin America. The construction of the nuclear power plant will increase the energy derived from that energy source by 70% and will allow the energy matrix to continue to be diversified, reducing the use of fossil fuels. It is even a clean energy as it limits the emission of greenhouse gases.

I have mentioned the Santa Cruz dams. For these, a new financing framework was agreed upon with China Energy Engineering Corporation. That is the other great project that China is building in our region. The Kirchner and Cepernic dams are the third most important in Argentina after Yaciretá and Salto Grande.

I do not want to miss to mention the expansion of the Cauchari solar park in Jujuy or the Cerro Arauco wind/solar park in La Rioja. Nor should I forget the investment that the China State Grid Company will make in the electrical network for the AMBA or the construction of a lithium carbonate plant in Catamarca by the Zijin mining company, among other major projects.

Defense cooperation as a means to overcome British blockade

Among the agreements, the intention of both countries to deepen defense cooperation has drawn much attention. What are your expectations in that sector?

Our defense cooperation sould not come as a surprise. First of all, after the Malvinas War (British: Falklands War), Argentina has had repeated problems in re-equipping the Armed Forces due to the embargo imposed by Great Britain. Our government has demanded the cessation of the blockade that the United Kingdom government maintains on our country, preventing us from buying arms that contain British components.

We faced this blockade when we wanted to purchase Swedish Gripen aircraft in conjunction with the Brazilian government a few years ago, and more recently, when we wanted to acquire the KAI FA-50 Fighting Eagle from Korean Aerospace Industries, a partner of the American Lockheed Martin. So, in this context, it is not uncommon for us to be discussing the acquisition of defense material —such as the possible acquisition of third-generation JF-17 aircraft— and, what is even more interesting, the start-up of a series of productive projects that contemplate the transfer of technology and capabilities to defense companies in our country. For example, with the company Norinco, we are looking for opportunities to set up a factory in our country for 8×8-armored vehicles for military use and trucks for civil transport.

For instance peacekeeping and humanitarian aid missions. Since its first participation in Namibia, in 1989, China has been increasing its participation in United Nations peacekeeping operations and today participates in several missions of this type as well as being the second largest provider of financing for such operations. Argentina also has significant experience in this field and participates in various missions. Argentina and China have much to offer in this regard, which is why both defense ministries agreed to strengthen exchange and cooperation in this area. I want to emphasize the following: both China and Argentina are open and cooperative, and have a pacifist tradition.

Just before the Argentine president’s trip to China, your country has signed an agreement with the IMF. Some sources report that Argentina-China relations have positively effected negotiations with the IMF. Can you confirm this? If so, in what way? Does China present a different position within the IMF compared to the classic neoliberal policies of this institution?

Like the United States, China is an important member of the IMF. For this reason, we ask both countries, as well as some of our most prominent European partners, for help in negotiating the agreement with the body. After the bilateral meeting between presidents Fernández and Xi during the former’s visit to China in early February, the government of that country expressed its firm support for Argentina through a statement. The agreement with the IMF is important for Argentina to achieve a certain financial stability, but also to grow and pay the debts irresponsibly contracted by the previous government.

It is not the first time that China has proven to be a key ally for Argentina. It already did so after the crisis unleashed by the pandemic. Just approxiamtely a year ago, the Chinese government renewed Argentina’s second tranche of the $8.5 billion currency swap. The agreement with the Central Bank of China was reached at the same time that the Argentine Ministry of Economy began to negotiate the debt with the IMF.

The central problem was that the validity of the second tranche had been tied to the stand-by agreement with the Fund, which forced the direct intervention of President Fernández with his Chinese counterpart to resolve the situation. For Beijing both then and now, it is important that Argentina pays its debts and avoids default. For some time now, China has been a nation very committed to the functioning of this and other multilateral organizations and seeks to increase its influence in them. Therefore, it exercises its role as a responsible actor on the international scene and demands exemplary behavior from its partners.

Tomorrow in the second part of the interview: Argentina’s position regarding sanctions on Russia affecting Argentine-Chinese relations; the pro-tempore presidency of the CELAC and the perspective on Belt and Road; the struggle for Argentine sovereignty over the Malvinas and comparison with Taiwan; and the question of a multipolar world order and Latin America’s place in it.