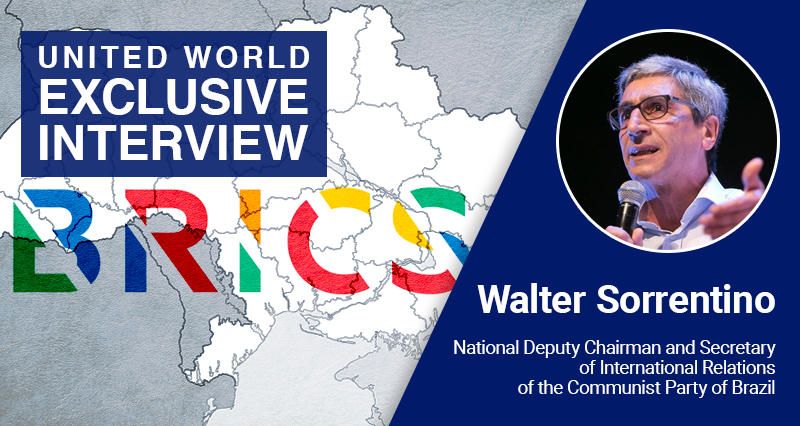 The conflict in Ukraine is continuing, while NATO’s eastward expansion, Russia’s response and US attempts of imposing global sanctions on Moscow are being discussed on nearly every corner of the world.

We interviewed Walter Sorrentino, National Deputy Chairman and Secretary of International Relations of the Communist Party of Brazil, on the analysis and position of his party, the current and – with presidential elections in October – future government of Brazil and the future of the global economy in respect to the conflict in Ukraine.

What is your opinion on the conflict in Ukraine? In which context do you evaluate it?

In the last 30 years since the dissolution of the Soviet Union, the United States and NATO have applied a policy of expansion towards the east of Europe. Their main target was to encircle Russia. The inclusion of Ukraine and Georgia was decided upon already in the 2008 Bucharest summit of NATO.

Since then, Russia responded with a hard stance on this policy. This NATO expansion was inacceptable for Russia, because it would have lead to a brutally unsafe situation right at its borders.

The objective of this US and NATO strategy is to inflict conflicts and contradictions between Russia and its neighbors, especially the former Soviet Republics, in order to be able to intervene militarily against Russia.

This policy takes place during times when the United States is experiencing a relative decline of its hegemony, and where it feels threatened by the alliance between Russia and China.

From the point of the Communist Party of Brazil, we evaluate the incident of February 24 in Ukraine as the result of this aggressive escalation between these two countries, Russia and Ukraine. But these two countries do not only share a frontier, they also share culture and history. We call these two countries to find a solution within diplomacy and dialogue, in line with the international law and the principle of non-intervention, to find a peaceful solution to the actual crisis.

This requires a consideration for the legitimate security concerns of Russia, which includes the reversal of NATO expansion towards its frontiers. I repeat: The contradictions that the imperialist-capitalist system imposes on the nations cannot be solved by war but by peace and cooperation. This should be the position of all leftists and progressives over the world. This is the position of the Communist Party of Brazil.

Brazil is on the way to elections, where the Labor Party (PT) seems to lead polls with a chance to win. Have they also taken a stance on that conflict?

Yes, parts of the PT have taken a similar position. The former Brazilian President Luis Ignacio da Silva insisted on the position of a negotiated solution, in the sense that war is always to be condemned.

The former Foreign Minister, Celso Amorim, who today is a close adviser of Lula, at first focused on the critics against the United States, considering the security concerns of Russia as legitimate and evaluating NATO’s expansion as absurd. According to him, this expansion has forced a situation of insecurity on Russia.

But the former Foreign Minister later on expressed strong criticism on the Russian invasion of Ukraine, stating that the unilateral use of force is not justified under any circumstance.

The government of Bolsonaro has declared neutrality in the conflict. Why did it do so?

Brazil voted in favor of the motion in the United Nations condemning the Russian invasion of Ukraine. But Brazil also stated that this position should not be taken as approval of unilateral sanctions against Russia and the indiscriminate sending of weapons to Ukraine. Brazil considers that such steps do not contribute to the re-opening of a diplomatic and constructive dialogue, instead bearing the risk of raising the tensions even further with unforeseeable consequences for the region and beyond.

Brazil partly depends on Russia in regards of fertilizer supply for the agro-industry, which is an extraordinarily important sector in the national economy.

The change in the position of the Brazilian government occurred on February 25, when the country voted in favor of a resolution in the UN Security Council condemning the invasion. This happened under very strong pressure from the monopolistic media institutions and pro-imperialist economic sectors of Brazil.

Yes, there is a strong conflict inside the government. The battle over the narrative is very intense. In the monopolistic media and communications, the discourse of condemning Russia is very dominant. The hegemonic sectors of the country are economically and culturally very dependent on their ties with the West and the United States. This is a kind of mental colonization that disables any critical evaluation.

Worse than that, this kind of positioning acts against the own national interests at stake. Brazil’s external economic relations are those of a global player. We have intensive trade relations with all, with the United States as well as with China, Russia and Latin America, the Middle East, Africa and Asia. In spite of that, we observe a very strong ideological and cultural dependency from Washington.

Brazil is heading to presidential elections this year. Do you thing that the future government will support and take part in the attempt of isolating Russia globally?

Concerning the future Brazilian government: This will undoubtedly be Lula’s government. And in that government, there will be no intention at all to support the isolation of Russia. The BRICS, which includes Russia, plays as a strategic alliance a decisive role in constructing the national sovereign project of our country.

And the forces that support Lula predominantly take this stance decidedly. Led by a progressive government, Brazil will support peace, negotiated solutions and the self-determination of the peoples, in favor of the principle of non-intervention and the territorial integrity of the members of the international community. This is very clear.

Which consequences of the Ukrainian conflict do you observe in Latin America?

This is a very difficult question to answer, because the situation is still evolving. There is a new situation with a profound geopolitical change due to the emergence of multipolarity, the relative hegemonic decline of the United States and the rise of new powers, among them above all China. The capacity of nation-states to struggle for their interests by exploiting the contradictions in the global system is changing.

With the war, the global economy will face a hard reality that suffocates the recovery after the pandemic, limiting trade and raising the price of oil and other basic goods. Inflation may rise strongly.

The United States’ and its allies’ response to the war is another war, the economic war with sanctions on a level unforeseen before in regards of their coverage and volume.

But this takes place in a time when the European and US’ forces of reproduction are not the same as they were 30 years ago. Especially Europe is facing stronger problems more than ever.

“Turning monetary system into a weapon will have strong repercussions”

The sanctions imposed on Russia indicate that the central banks’ accumulated foreign reserves can be blocked, with impeding the country from using them. And if the Russian reserves are not truly a wealth that the country can use, this causes a great shock. Turning the monetary system into a weapon against a G-20 member, which Russia is, will have strong repercussions.

Latin America faces a progressive wave, currently with the governments of Argentina and Chile, Peru and Bolivia, with perspectives for Nicaragua and Venezuela, and if the left wins the elections in Brazil and Colombia this year, then there are new perspectives for the continent.

And in any case, the geopolitical changes I mentioned above open up new possibilities for the national, sovereign development of our countries. There is a new and greater maneuver space for strategic alliances for our countries.