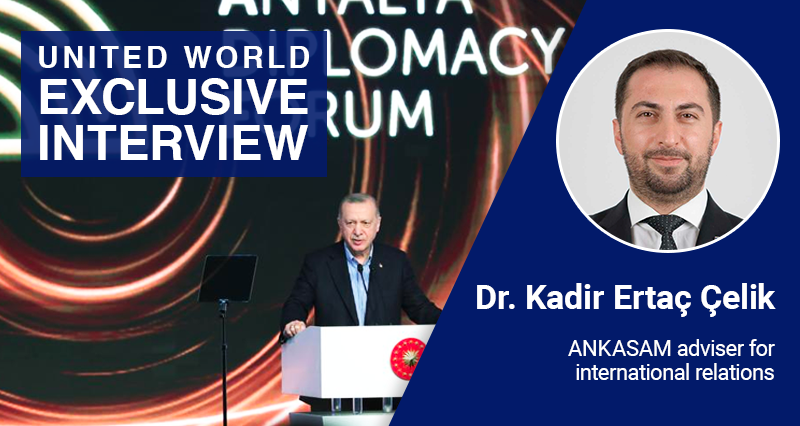 While Israeli President Isaac Herzog ‘s visit to Turkey – the first after 14 years – was still continuing being echoed, the Greek Prime Minister Mitsotakis visited Turkey. One of the important topics of the visit, which was evaluated positively in terms of Turkish-Greek relations, was the Eastern Mediterranean and energy.

First came Israeli President Herzog’s visit to Turkey, and then followed the Greek Prime Minister Mitsotakis. Meanwhile, it is observed that Ankara is willing to develop relations further with regional countries such as Egypt, UAE and Saudi Arabia. How do you evaluate this change in Turkey’s foreign policy? Do you think this change takes place within Ankara’s own initiative or do other factors play a role?

First of all, this is a positive change; it should be evaluated positively. The policy of reducing enemies and increasing friends is extremely important for a healthy integration into the system of international relations. Turkey is putting aside the policy of struggling against the ‘others’, which was created following the end of the Cold War along artificial perceptions. Today, Turkey is trying to contribute to regional and global peace through cooperation by also focusing on its national interests first. Turkey has entered to improve its relations with countries such as Armenia, Greece and Israel, with which it had been reported that Ankara had troubled relations.

This issue has two dimensions: First is Turkey’s preference and the second is international necessities. The problematic geography and topics, where Turkey is located, beginning with the Russia-Ukraine war, turn Turkey into an important country for both the West and for the countries that have problems with the West. Turkey also made a new regional and global opening, with a cooperation model that focused on freezing chronic structural problems stemming from the history and solving the secondary problems in the short term.

This situation created a need for Turkey. In other words, beyond the USA indicating a path towards Turkey, Turkey has taken the initiative and other actors are becoming more in need of Ankara’s support. These tendencies are developing as a result of Turkey’s foreign policy choices being considered as rational and in line with their interests by other countries. Countries such as Egypt, Israel and the UAE are some examples.

Mediterranean geopolitics returns to its basics

Israel and Greece: Gas was one of the important topics in both visits. With the EastMed project arriving at a dead-end after USA withdrew its support, the idea that Egyptian and Israeli gas reaches Europe via Turkey is again on the agenda. Is the Mediterranean geopolitics changing?

Mediterranean geopolitics is returning to its basics. There is a legitimate process in line with international law and the recognition of Turkey’s sovereign rights. We can say that Turkey’s Blue Homeland policy initiatives on the field and in the diplomacy have achieved positive results.

Forced to open space for Turkey, the West is trying to end the Greek-Turkish proxy war. The West does not risk losing Turkey. They cannot afford to lose Turkey, because losing Turkey means serious changes in the course of the game with increasing costs for them.

Therefore, in order not to lose Turkey to the Russian side, there is a rapprochement from the West and NATO towards Turkey. Turkey follows a balanced policy here. While it tries not to exclude and lose Russia; it also tries to maintain strong relations with the West. Turkey’s strategy of ‘reducing the enemies and increasing the friends’ is not limited to the West. It also includes the forces adversarial to the West.

Within the idea of satisfying Europe’s needs for gas in a solution that centers on Turkey, Western security paradigms are changing to include Turkey as well. While this situation strengthens Turkey’s relations with the West, it also obliges the country to maintain strong relations with Russia in the Caucasus, the Middle East and the Black Sea. The ‘othering’ of Turkey and Russia against each other would create serious problems for the foreign policy of both countries.

Normalization with Syria is next

You mentioned the strategy of reducing the enemies. Do you think the Damascus government will also be included in Ankara’s ‘normalization’ agenda in this context? How will Israel’s plans on Syria be affected by these new developments?

If we had to make suggestions about the possibility of Turkey’s normalization with Egypt and Israel a few years ago, we would have been rejected. There is such a dynamic functioning of international relations. Although there are problems between Turkey and Syria, these are not unresolvable.

For Turkey, there are three important topics regarding Syria: ensuring the territorial integrity of Syria, solving the immigration problems and establishing bilateral relations. Ankara and Damascus have already started various initiatives on these issues. This process will accelerate further with international conditions becoming more difficult. It is impossible for the Russian-Ukrainian war not to affect this issue. 2 and a half million immigrants moved to Europe from Ukraine. A new conflict in Syria could bring 2 million more refugees. This would have serious economic and social consequences. Neither Turkey nor Europe wants this.

Israel is trying to secure its position in the new international system as well. The problems it experienced by the Biden administration in relations with the UAE and Saudi Arabia are pushing Israel to find new actors and seek security. On the other hand, the energy needs of the Middle East also require stability in Syria. In this context, Israel will also take steps according these needs.

Turkey’s priorities are the territorial integrity of Syria and avoiding the presence of US supported terrorist organizations, which act against Turkey’s territorial integrity from the north of Syria. These are Turkey’s priorities. If we agree on this issue, we can see a normalization process with Syria. Maybe the process advances with lower level delegations first and then with political meetings at the last stage. Of course, relations with Russia should also be considered in this process.