TRNC President: “Lavrov’s mention of our country’s name shows righteousness of our struggle” 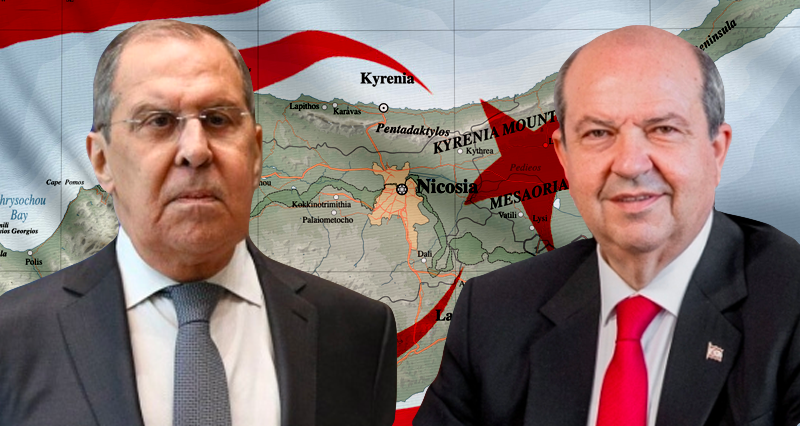 Taking part in the Antalya Diplomacy Forum held in Turkey, the President of the Turkish Republic of Northern Cyprus (TRNC), Ersin Tatar commented on Russian Foreign Minister Sergey Lavrov’s statement, which had drawn similarities between Russia’s military operations in Ukraine to Turkey’s peace operation in Cyprus in 1974.

Tatar said “Lavrov’s mentioning of the TRNC by name has been recorded as a confirmation of our sovereignty. It displays the righteousness of our justified struggle.”

Asked whether steps of Russia recognizing the TRNC diplomatically would follow Lavrov’s statement, Tatar answered, “The issue of diplomatic recognition is a matter that might evolve in time”.

Below we present the full text of the interview of President Ersin Tatar to Turkish TV Channel Ulusal Kanal.

Will the Russian intervention create any opportunities for the TRNC?

We are very pleased that the realities of Cyprus have been acknowledged. Due to the Greek-Cypriot and Greek pressure, the United Nations had recognized the Greek-Cypriot Administration, as it was the sole representative of Cyprus.

We had faced injustice in that context. The Turkish Republic of Northern Cyprus is a reality, is a fact, and it is the expression of the sovereignty of the Turkish-Cypriot people. But they always tell us on every occasion that our diplomatic recognition can only occur after treaty. What they tell us is: ‘Yes you are victims, yes there is injustice here, but there is an ongoing conflict that we need to overcome.’

But the fact that the Russian Foreign Minister in his statements mentioned the name of the Turkish Republic of Northern Cyprus one again shows essentially how justified the current realities in Cyprus are. This is our evaluation of the statement.

Because in his statement regarding the Russian intervention in Ukraine, the Foreign Minister mentions ethnic groups of Russian and other origin living there, which strive for independence – a struggle that Russia aimed to support with this operation.

Of course, if you compare the situation in Ukraine with that of Cyprus, we have to make some statements: Turkey’s intervention in Cyprus on July 24, 1974 is an operation based on international legitimacy, because Turkey has been a guarantor state for the Republic of Cyprus. As Turkey was a guarantor state at that time, and as the Greek Junta and its collaborators in Cyprus toppled down Makarios in a coup on Jul 15th, declaring the Hellenic Republic of Cyprus, Turkey was able to intervene into the island based on its rights as a guarantor state. And Turkey then sent soldiers to Cyprus to protect the life and property of the Turkish Cypriot people and to restore the situation. And with the Turkish “Cyprus Peace Operation”, a new era began in Cyprus. A peaceful and independent life has been provided to Turkish Cypriots thanks to that intervention.

The “Cyprus Peace Operation” has once again proven the importance of Turkey as a guarantor state and the Turkish military presence in the Turkish Republic of Northern Cyprus. Take a look at Ukraine: although the West, the United States, NATO and the European Union support that country, they have not been able to intervene. And s many people were killed in these our times. Families are torn apart and children suffered, but none of those actors could do nothing.

Therefore, the current peace and stability in Cyprus is very important. In the case of any lapses, any wrong step or the withdrawal of Turkey to the status ante quo, no one should have no doubt that new and very big skirmishes would flare up again. Hence the situation needs to be dealt carefully.

You need to learn different lessons from different occasions. This is our evaluation from the perspective of the TRNC. We can create such evaluations when we consider the situation of TRNC. We are deeply pleased to be a part of Antalya Diplomacy Forum. Different meetings and gatherings here send very crucial messages to the public opinion all around the world. The yesterday’s summit between the Russian and Ukrainian foreign ministers attached a new and greater importance to this international forum.

I think the fact that this meeting has taken place due to the efforts of President Recep Tayyip Erdoğan and Çavuşoğlu, the Foreign Minister shows us how Turkey’s efforts in the area of diplomacy are recognized and accepted, how smoothly the situation is managed and how Turkey exerts its authority as one of the most important countries in the area.  Also, I consider that this gain is empowering and will empower the country, and concerning the comparisons to the Cyprus intervention, Turkey, which has always been on our side as a nation in the defense of our national cause, can and will contribute to the upcoming negotiation processes. Therefore, these meetings please me very much and I hope that they and the forum will induce further positive developments.

Will there be any steps concerning the diplomatic recognition of TCNR along with Lavrov’s statements?

The issue of diplomatic recognition is a matter that might evolve in time. We are now telling the international community about the just cause of the Turkish Cypriot people. We keep saying that, if a dialogue process is due to begin on Cyprus, this needs to be based on sovereign equality, the existence of two sovereign states side by side. We say that if a dialogue process shall begin, our sovereign institutions needs to be recognized, and that our internationally equal status should be accepted. We continue our work and Republic of Turkey supports us greatly.

Because, as the TRNC, we are facing a tremendous injustice from the international community. We cannot make our voice heard everywhere, we cannot speak out. They even do not allow our participation in different international meetings. South Cyprus on the contrary is a recognized state and a member of the European Union, thus being able to travel everywhere and make its voice heard. As a result, these kinds of forums as here in Antalya provide an opportunity for us to make our voice heard and tell the world about our situation.

This is a long-term struggle. We have been leading that struggle already for years. Turkish Cypriots have made a long way to be in this situation since 1974, passing over different stages and overcoming different obstacles. Undoubtedly, there are people who think differently, who have different opinions in our own democracy in Cyprus. But the currently dominating opinion, mine, our parliament’s president’s and our government’s is that, if there is to be a solution to be found, this should be based on two separate sovereign and equal states living side by side. The current democratic establishment in Cyprus has developed a solution following that path.

What kind of opportunities would a diplomatic recognition of the TRNC by Russia provide?

It is too early for me to make any assessment on that subject. The fact that the Russian Minister of Foreign Affairs, Lavrov used the name TRNC in his statement means that he proposes that the two states in Donbass, like the TRNC, should be given opportunity to defend themselves in various international platforms and meetings. In that context, he used the name of the TRNC. This is a positive thing from our perspective obviously, because the Foreign Minister thus speaks of a given reality.

The fact that the Foreign Minister of the Russian Federation mentions our country’s name shows that a reality is now becoming acknowledged. It does not directly mean they will recognize us. But what is this reality? There is a state called TRNC, it is the state of Turkish Cypriot people. TRNC may not be diplomatically recognized at the moment. But with this statement, the TRNC is recorded in all documents as a state and the entity representing the sovereignty of the people that represent that state. It thus provides us a ground of legitimacy.

We reject any kind of process that will turn the TRNC into an entity within the Greek Cypriot State in a federal solution, thus eliminate our state, and which will also cut our ties with Turkey.

“In its own way, Russia also approaches to those two regions by recognizing them diplomatically and getting them closer to itself”

In its own way, Russia also approaches to those two regions by recognizing them diplomatically and getting them closer to itself. In comparison, the position of the Republic of Turkey is much different and more legitimate, because the 1974 intervention of Turkey in Cyprus occurred on the basis of that country being a guarantor state and the demand coming from the Turkish Cypriots. Therefore, no other context can be established in Cyprus before a just and sustainable agreement is achieved. Besides, the people of the TRNC sincerely demand continuation of Turkey’s status as guarantor state and its military presence eternally. Because the Republic of Turkey is our sole reliance and the assurance of our security.

Is there any work done between Turkey and the TRNC regarding the Russian tourists? Are you expecting an increase in tourism this year?

We have of course endured and are enduring a lot of problems due to pandemic. But now, as you observe that the regulations of the pandemic are simplified, with visits becoming much easier, we had been expecting a great increase in tourism. But now, we will all see how this war will impact us. We are hoping that this situation will end until April or May, a peaceful environment will be restored, and tourists can travel however and wherever they wish to.

“A new wave of Russian tourists to the TRNC is possible”

The stance of Turkey in this situation is certainly important. Since Turkey managed the crisis in an efficient way, sending necessary messages to both sides in an appropriate and equal manner, I expect a respectable number of Russian tourists. The reason for my expectation is because Russia and Russian tourists already know the place and its characteristics from the past. Additionally, with a new perception and new positioning, a new rapprochement can take place. Their distance to countries of the European Union has of course grown further. Russian relations with European Union have really gone backwards. Hence, a new wave of Russian tourists coming to TRNC is possible, I see some tourism operators trying to open up the way for this increase and I hope this situation will get to a fortunate ending.