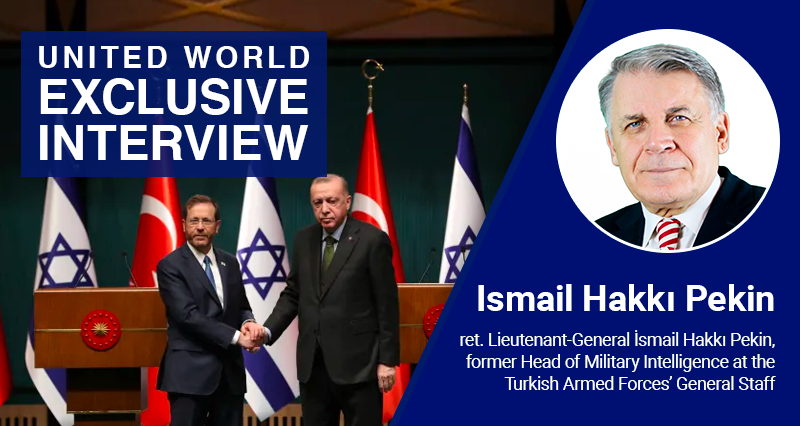 How do you evaluate this high-level visit after an interruption of 14 years? What kind of effects might this visit have on relations between the two countries and on developments in the region?

This visit is very important for the developing the Turkish-Israeli relations. However, there are some reasons that forced Israel to make this visit. One of them is, that following the withdrawal of the US from the Middle East, Israel has increased security concerns. As you know, the USA also withdrew from Afghanistan and left limited forces behind in the Middle East.

The second issue is the nuclear agreement with Iran (JCPOA). It seems that this agreement, which prevents Iran from obtaining nuclear weapons, will be signed. Tehran’s demands in the according negotiations have also been accepted. Israel needs an alliance to balance Iran’s power in this region. Saudi Arabia also needs an alliance in the region for the same reason. Both countries want Turkey to be their ally in the region to counter balance Iran.

The third reason that forced Tel Aviv to pursue this visit is the issue of natural gas. After the US’s withdrawal, the East Med project has reached a dead end. The USA wants to move its project to further south. In that case, it might be possible for Israeli natural gas to be transferred to Europe via Turkey. Or the gas can be transferred through a pipeline. On the other hand, Ukraine and the Black Sea are also important issues for Israel. Israel has 18.000 workers employed in start-up companies in Ukraine. Therefore, it is seeking security in Black Sea.

Turkey also needs technology transfer in the military sector. We can get the technology we need from Israel. Turkey has agricultural needs that can be satisfied by Israel also, since that country is very advanced in this sector especially concerning seeds. The natural gas transfer is also important for us too. The matter is not only the natural gas Israel itself owns. There is also the natural gas coming from Qatar needs to be transferred through pipelines that will pass through Turkey. Qatar is worried about Iran of course. Bahrain is also afraid of Iran. They both have security needs in this matter.

Therefore, I think the main focus of the meeting is security and natural gas. Turkey is one of the key countries in terms of Black Sea and security.

From bilateral relations to regional alliance

Again, after a long period of 9 years, a visit from Turkey to the UAE took place. We can see that Ankara wants to continue to deepen its relations with UAE, Egypt, Saudi Arabia and the other countries in the region. What do you think about this change in Turkey’s foreign policy? How will these developments affect Turkey’s relations with Tehran?

Turkey is trying to advance cooperation instead of conflict with all neighboring countries. The EastMed project, which was created and supported by the USA against Turkey, did not work. After US withdrawal, it became clear that there was a need for Turkey in the region. Turkey should consider its own interests while developing these relations. It should not destroy the relations with Iran and should not throw Tehran aside. The agreement that will prevent Iran from obtaining nuclear weapons is going to be signed and the embargoes will be lifted. When the embargoes are lifted, Iran will become stronger in the region. Israel and Saudi Arabia are looking for balancing factor. This is not seeking hostility; this is trying to balance a powerful force. The two are different things. So this does not mean organizing against Iran, but Iran will be aware of that power. On the other hand our relations with Iran will of course continue to develop. Creating a balancing factor does not affect our relations negatively.

Similar relations will be established with Greece as well. Greek Prime Minister of Greece Michotakis will visit Turkey soon. One of the topics of this visit may be discussing Turkey’s initiative about the Aegean islands. Concerns about the Ukrainian war being carried over to the Balkans may also be discussed. The most important issue may again be the gas. Turkey may provide some of the Azerbaijani gas to Greece. There is such a demand.

Therefore, these policies of Turkey are in accordance with current trends. Of course, Ankara should establish transparent and interest-focused relations with all its neighbors. Although Turkey is a NATO member, if it develops transparent relations with its self-interest, this won’t cause a problem.

One of the most important issues is the transformation of the friendship that Turkey developed with the countries of the region into regional alliances. These recent developments once again have revealed the importance of the nation state. Every nation state should have its own economic independence and a strong armed force.

Regarding the relations developed by Turkey: Regional alliances building blocs against the great powers may be an influential factor.

Israel has to give up on its plans in Syria

If the normalization policy continues, there will be only the Syrian government left, where Turkey has bad relations in the region. Do you expect a healthy dialogue between Ankara and Damascus in the near future?

I expect meetings to take place with Damascus soon. In fact, Israel and Turkey may together meet with Damascus. Today, the threat against Damascus must be removed. If that country is torn apart, we may face very different results. Syria shouldn’t be a terror zone anymore. Israel will also have to give up its plans in Syria for its own safety. If Assad leaves, if Syria is divided, it’s not clear who will replace him and what forces Israel will face. On the other hand, Syria will be affected by the Russia-USA conflict in Ukraine. Therefore, Turkey should take the necessary precautions as soon as possible and should discuss the terror threat in Idlib with Damascus.