Living under attack during 8 years 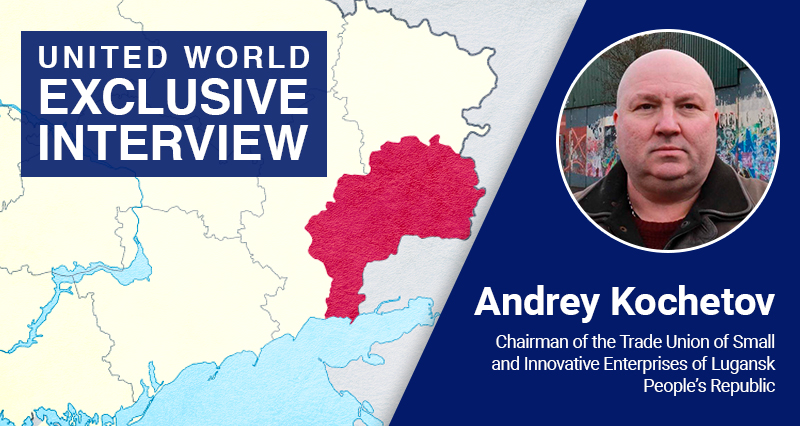 Russia’s military operation enters 8th day, as the Kiev administration continues its attacks on Donbass. On the other hand, the second round of talks between the sides is expected to take place within days. The first round of negotiations has not produced the desired result.

After the Maidan events in 2014, neo-Nazism began to rise in the country. These neo-Nazi groups took the lead in Kiev’s operations against Donbass. In 8 years, 2,600 civilians were killed by the Ukrainian attacks in the Lugansk and Donetsk People’s Republics recognized by Russia. Western countries, on the other hand, ignored these attacks.

We talked with Andrey Kochetov, Chairman of the Trade Union of Small and Innovative Enterprises of Lugansk People’s Republic, about the ongoing military intervention of Russia, the situation in the Donbass region, the conflicts that have been going on for 8 years.

The latest situation in Donbass

What is the latest situation in Donbass? How are the streets? What challenges do people face?

The situation in Donbass is very difficult. But I would like to say some words about the situation just one week ago. You see, the Ukrainian army girded nearly half of the military troops in our territory divided into two groups: one in the south, the other in the north. They girded many weapons. We were expecting they would kill us. Because it was obvious that they wanted to divide us in two parts and after that, they wanted to kill us one by one. This was just one week ago.

But Monday President Putin decided to recognize our republics. This decision provided a really very big protection for us. We understood that. Russia not just supports us, as they have been doing during last eight years. They were now really ready to help us to protect our people. And this caused a very big happiness for all our people, because we had been weakened during these very long and hard eight years.

How did the population in Donetsk and Luhansk react to the start of the military operation?

I am not Russian naturally. I am Ukrainian. I really love my country and I am proud of it. But the country that I remember only exists in my mind, because now Ukraine is the country of Nazis. The Nazis hate everything and everybody. Maybe you could see many pictures from Kiev, Kharkov and other cities of the Ukraine, when the common people just gathered with the machine guns to rob the shops, to attack the people, to kill people. This is a terrible situation. But the root of the situation is the coup d’état in Maidan, when the Nazi ideology came to the power in Ukraine. The saddest thing for us is that nobody from European government saw this situation.

We know that today the western countries say Putin is big aggressor. But we know this isn’t true. From our point of view, he is now trying to stop the war that was started eight years ago in Maidan in Kiev with the coup d’état and when the region of Donbass in the eastern Ukraine refused to accept the new Nazi regime. That’s why they started the war. They used the regular army against us. They shelled us and they bombed us. For us this is the end of the war and all our people accept this situation like “Red army is crashed again the Nazi backyard.”

‘We feel much safer’

What is your expectation from the military operation? How do you interpret the aim of the operation? When will it end?

Now the situation is very difficult, because the Ukraine army is still bombing us. For example, yesterday in Donetsk, they bombed very heavily, 4 people died and 8 people were wounded. There were many damages of civilians. You see the difference between the tactics of two armies. I mean the Ukrainian and Russian armies. The Ukrainian army did everything like United States army. They destroyed everything. They destroyed water supplies and electricity. They are always bombing the civilians. They did it during 8 years of the war. But now you can see that Russian army already surrounded some cities in Ukraine. However you can see that, in these cities the citizens still have the water and electricity. So Russia doesn’t come to destroy the Ukraine or Ukrainians, they come to destroy the Nazi regime. This is absolutely true.

Now we feel much safer ourselves than before, because we have the protection from the side of Russia. And we believe in a good future for our people, for our republics and territories and we believe the Ukraine Nazi regime will be destroyed in just some weeks.

As I told you before, it was a very good or maybe the best news, because for us this is not a situation that started the war, this is the beginning of the end of the war. It was terrible to see on blindness of the Western countries when they fed the old time regime with heavy military weapons. Now our people are really happy.

‘The majority of the Ukrainian people don’t want war’

Do the Ukrainian people trust the Kyiv government?

Can you imagine how the people lived during eight years under the very heavy information control and pressure from the government? It is interesting to see how in the Western countries, people saw the black color and said loudly that this it was white. And if you tried to refuse, they would put you in jail. The same situation happened in Ukraine and I can understand that many Ukrainians may support of the government. But anyway, I think that the majority of the people don’t want war, they support peace and they want to leave in a peaceful country that will be also friendly towards the Russian federation.

‘Kiev decided to rewrite the whole history of the country’

How have you lived the past times since the 2014 coup in Ukraine? Can you describe the situation that forced you to declare independence from Ukraine?

You see after the coup d’état, Kiev decided to rewrite the whole history of the country. During the Second World War, the majority of the people were defenders of the Soviet Union. They were soldiers who fight against German fascist Nazis. But during the Second World War, there were also many people who supported the Nazis, the people from the western regions of Ukraine. They even strove in the Nazi army. Now the ideology of these people came to power in Kiev. For us, it is impossible to accept this situation. We never betrayed our fathers and grandfathers. That’s why we stood up to fight against the Kiev, eight years ago.

‘Referendum process is possible after the operations’

Is there any possibility of holding a referendum after military operations? As in Crimea…

I think yes, there will be referendum, because Putin is always trying to do everything in democratic way. I know personally that he respects the law very much and he will do everything according to the law, so I think the referendum is possible after the end of the military operation.

What is your proposal for the future political constitution of Ukraine, do you expect a change in the state’s integration?

The Ukraine consisted from five other parties that have different religions, languages and mindsets. So if the Ukraine wants to maintain its borders as they are, maybe it is the best way to avoid any conflict in the future to get constitution as a federal country that will consist of federal regions. I think it will be the best. Or maybe in the next future, we will see the some other countries in the place of the modern Ukraine, who knows. But in any case, Nazi regime must be toppled down. Because this regime kills us.

4 responses to “Living under attack during 8 years”