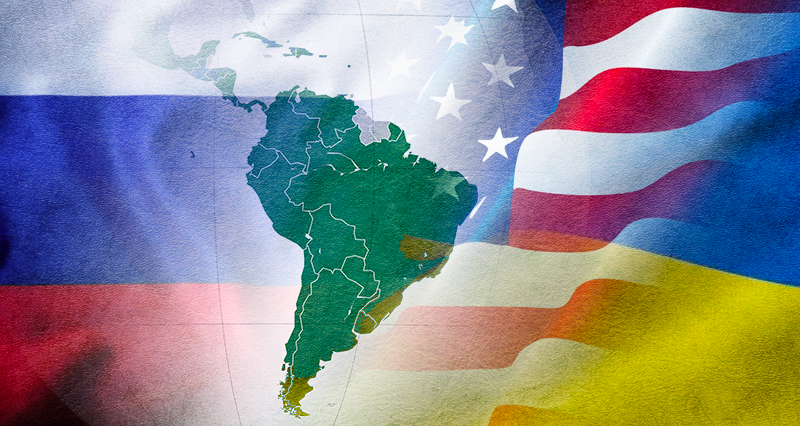 US President Biden claimed to have “spent months building coalitions of other freedom-loving nations” against Russia. But a look on Latin American countries’ positioning shows he has not been very succesfuly yet. A number of countries outrightly rejected NATO expansion and aggression in Europe, while others preferred to stay neutral refusing to support Washington’s sanctions. Mexico even insisted on selling two oil fields to the Russian company Lukoil.

The United States has pursued the enlargement of NATO towards Eastern Europe in the last 20 years as a strategy with the goal of containing Russia and disrupting Eurasian economic relations. American attempts of preventing the pipeline Nord Stream 2 tell an indicative story of that strategy.

With Russia’s response of a military operation against Ukraine, the United States has moved a step further, trying to exclude Russia from the world economy by imposing sanctions.

These sanctions also constitute a test for the US global leadership, as Washington tries to make other countries join the efforts to the exclusion of Russia from the global economy.

Until now, Washington has failed the test as far as Latin America is concerned. While some countries’ position was following their long-term strategic path, others took a well surprising position.

A long-standing bulwark of anti-imperialism, the Cuban government rejected “NATO’s progressive expansion toward the Russian Federation’s borders”. Havana voiced “growing concern” over the NATO decision to activate the Response Force.

“Cuba will continue advocating a serious, constructive and realistic diplomatic solution to the current crisis in Europe by peaceful means, ensuring the security and sovereignty of all, and regional and international peace, stability and security”, stated Foreign Minister Bruno Rodriguez.

The government of the Bolivarian Republic of Venezuela also emphasized the “destabilization efforts of NATO” and sustained that “dialogue and understanding and dialogue are the way to achieve peace”, as President Nicolas Maduro said after a phone call with Russian President Putin.

The Venezuelan representative to the United Nations, Samuel Moncada also stated that his country rejects sanctions against Russia, also criticizing Western “war propaganda and discourses guided by intolerance and hatred.”

Nicaragua: The US and NATO are “involved into the conflict”

Nicaragua took a similar stance. Its Permanent Representative in the United Nations, Jaime Hermida Castillo demanded a “de-escalation of hostilities that takes into consideration all legitimate security interests of the region, including the Russian Federation.”

Castillo emphasized that the issuing of sanctions against Russia by the U.S. and NATO while “ramping up the sending of weapons to Ukraine, clearly shows that the United States and NATO are already involved in this conflict”.

Bolivia: NATO is a “threat to international security”

The Bolivian government also rejected the expansion of NATO in Eastern Europe, with its ambassador stating in the UN General Assembly “NATO is not a guarantee of security. On the contrary, it is a threat to international security. We only have to remember the bombing of Yugoslavia.”

He added “we are observing the double standards of some powers that, instead of supporting peace efforts, provoke to confrontations”.

Mexico has taken a stance between the two sides. The country supported in the UN Security Council the motion provided by the US and Albania that condemned the Russian invasion of Ukraine.

On March 2nd, President Lopez Obrador retirated his country’s position to reject “all invasions, be it from Russia, China or the United States”.

At the same time, Lopez Obrador stated his country would “not take any economic repression steps, because we want to maintain good relations with all sides” – indicating that Mexico would not participate in a sanctions regime against Russia.

Moreover, the President responded that way to a question concerning the purchase of two Mexican oil fields in the Gulf of Mexico by the Russian company Lukoil on February 25. Lukoil will pay 435 million US dollars for the field.

The Mexican President furthermore criticized Twitter’s steps to title journalists as Pro-Russian: “Twitter needs to clarify this steps. We say ‘No’ to censorship and authoritarianism. These measures of placing labels and stopping people from expressing their opinions go against liberty”, said the Mexican President.

He repeated this opinion on March 2nd, calling twitter’s labeling of all those who argue in favor of Russia “fascism”.

A similar position was taken by Brazil. The country also supported in the UNSC the US draft to condemn the Russian invasion first.

But in a press conference on February 27, Brazilian President Jair Bolsonaro rejected to condemn Russia’s action, declaring his country would remain “neutral”, as Reuters reports.

“We will not take sides, we will continue being neutral, and help with whatever is possible,” Bolsonaro said. “A big part of Ukraine’s population speaks Russian.”

In reference to Ukrainian leader Volodymyr Zelenskiy, Bolsonaro said Ukrainians have “placed the hope of their nation in the hands of a comedian.”

The Brazilian President had visited Russia in February and met with Russian President Putin despite protests from the US State Department.

A matter of interest was the position Argentina was going to take, considered that its President also visited Russia in February and proposed to turn his country “to a gateway for Moscow to Latin America”.

On March 1st, during his speech to the congress, Argentine President Fernandez stated: “The peace of the world is disturbed by the military invasion of the Russian Federation on Ukraine. Europe is moved as the specter of war rises again. Again war violence devastates human lives.”

He continued his speech proposing “new regulations to save the millions of have-nots from misery”.

During the 49th session of the UN Human Rights Council in Geneva, Switzerland, Santiago Cafiero called on Moscow to “immediately cease the use of force” and advocated dialogue as a means to seek a peaceful resolution of the conflict.

“It is not legitimate to resort to the use of force and to violate the territorial integrity of another state as a way to resolve a conflict. Preventive wars are reprehensible because they are not lawful,” he added.

However, he appeared to not directly condemn Putin’s rationale for invading Ukraine.

“The international community has no right to condemn any state’s concern for its security,” he said, adding “every concern is legitimate, and in any case, it will be a debatable matter at a negotiation table or at the pertinent forum.”

Brazil and Argentina reject support to US in the OAS

At the same time, both, Argentina and Brazil declined to support a condemnation message in the Organization of American States. “The OAS statement, beyond the fact that it coincides with our statement, does not make a contribution to the call for a peaceful solution” affirmed tonight sources from the Argentine Foreign Ministry in contact with LA NACION.

Foreign Minister Santiago Cafiero, during his presentation to the UN assured today that despite condemning Russia’s invasion of Ukraine, Argentina did not join NATO and remains neutral in the armed conflict. “The only alignment that Argentina has is the interests of Argentine men and women, that is the foreign policy of our country,” the official raised and completed: “There is no need to choose sides here”.

Colombia: in “solidarity with Ukrainian people and Government”

There were of course also Latin American countries strongly supporting the US position. Colombia, Partner Country of NATO since 2017 and currently holding exercises with the alliance, was leading these.

Its Foreign Minister Marta Lucía Ramírez did not only condemn the Russian military invasion, but also rejected “the separation of the Donetsk and Luhansk Republics” – hours after participating in a ceremony honoring of Condoleezza Rice.

The Colombian Foreign Ministry stated its “solidarity with the courage of the Ukrainian people and its government”.

”From South America our support and solidarity to the Ukrainian people facing the unacceptable war of aggression from (president Vladimir) Putin“, said Boric who takes office next March 11 as president of Chile.

”Russia has opted for war to solve conflicts. From Chile we strongly condemn the invasion of Ukraine, the violation of its sovereignty and the illegitimate use of force. Our solidarity is with the victims, and the peace efforts“

Calling on the public opinion to watch and listen closely to the nine minutes message of Ukrainian president Volodimir Zelenski to the Russian people, “Today I tried a conversation with the president of Russia. The result was silence” said Boric.

At the the this article was finished, the United Nations General Assembly voted on a US proposal to condemn the Russian military operation. Despite the fact that Latin American countries either abstained from the vote or supported the draft. But Latin America in its majority rejects the sanctions imposed by Washington and continues relations with Moscow, undermining US attempts to isolate Russia effectively.