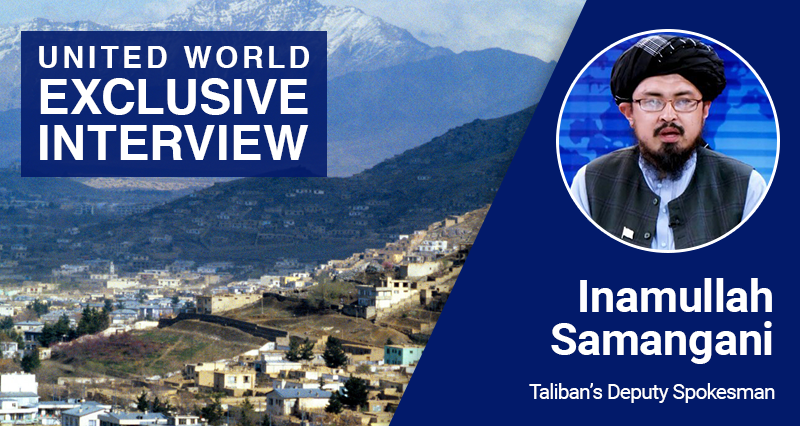 Afghanistan, an Asian state long called ‘the heart of Asia’, has always been in a whirl of unending war and unfettered turmoil. Afghanistan has experienced monolithic instability and numerous regime changes during the past four decades, but one thing that has remained unaffected is the strong resolve of the Afghans for a better future. The most recent change in government was last year (in 2021) when the Taliban toppled the western-backed Ashraf Ghan’s government on August 15 and took control of the country after 20 years of war.

International forces withdrew from Afghanistan and a US military C-17 carried the last American troops out of the country on 30 August, marking the formal end of the longest war in US history.

Taliban’s Deputy Spokesman, Inamullah Samangani, in an exclusive interview with the United World, said that 2021 was a historic, memorable and a good year for the people of Afghanistan. “It was momentous because the Taliban succeeded in ending Afghanistan’s occupation after 20 years of struggle, and we once again regained our independence,” Samangani said.

Without any doubts this has been a massive achievement in the modern history of Afghanistan, he said, adding the country has embarked upon a new journey in 2021.

“Like 2021, the current year 2022 is a great one for the Afghan people, because the Islamic Emirate is committed to taking the country forward on the path of progress, development and economic self-sufficiency,” the deputy spokesman vowed.

“We will make unswerving efforts in steering Afghanistan to stand on its own feet,” Samangani said, an effort for which Islamic Emirate wants to be recognized as a reliable partner to the international community.

He reiterated that the new government’s foreign policy would be based on mutual respect and friendly ties with neighbors, regional countries and the rest of the world.

“Our foreign policy is very simple and useful at the same time. We generally want to have meaningful relations with the international community and particularly with neighbors and regional countries,” said Samangani.

“There were some issues in the past with neighboring and regional countries. This was mainly because Afghanistan was not free, and was controlled by occupying states. Mistrust was everywhere, and it was thought that Afghanistan’s soil was likely being used against some neighbors and in return Afghanistan also had its concerns and grievances,” he said.

He added that there is a good opportunity at the moment – Afghanistan is being controlled once again by the Afghans themselves. “They are the ones who are now deciding their relations with their neighbors and regional countries. We cannot ignore some difficulties in relations with some Central and South Asians countries, we should work jointly to address it.”

From a  general perspective, the Taliban wants to have strong and economic-based relations with neighbors and regional countries in a bid to rescue “our region” from economic challenges, he said.

On the path to forming inclusive government

The international community, especially the US, cited norms in a bid to recognize the Taliban and that is the formation of an inclusive government with participation of all Afghan segments, with active inclusion of women. “We don’t have a single issue over forming an inclusive system,” Samangani said, but emphasized that there is no need for the international community and other countries in the region and neighbors to pressure them on the matter.

According to him, the Islamic Emirate feels the necessity of having an inclusive government more than any other country because it could help prevent Afghan society from falling into anarchy. At the same time, he asked for the world to give them time, as inclusivity has its different explanations in different countries, and the international community has its own interpretations: “The world must let and give the Afghans time to make this inclusivity among them in order to have a strong government which is useful for the society.”

Afghanistan has decided its fate – it is peace and development

Afghanistan is no longer subject to war, and citizens have decided to move toward development, progress, prosperity, and self-sufficiency in terms of their economy. “It’s not an easy task, there will be many bumpy roads ahead, but we must work in achieving sustainable peace and economic prosperity,” Samangani said.

In the past, Afghanistan had enjoyed financial support from the international community and in return they had their own interests to follow here, Samangani said, specifying that Afghanistan should now work to become self-determining in every aspect, especially in the economic arena. “Standing on our own feet is not easy, but we, as a nation, have fate and have a strong resolve that we can go through the path to achieve our sacred goal,” he added.

War in Afghanistan ended with the withdrawal of foreign forces. There is no more reason to linger on war. “We have also liberated Afghanistan from illegal militia groups and power-thirsty individuals. They have all been removed,” Samangani said.

When peace is maintained across Afghanistan, attracting investors will not be too difficult, he said. He also stressed that Afghanistan has potential to become a good market for investors which would provide better job opportunities for the Afghan people.

US decision on $7 billion in Afghan assists is reckless move

“The move will force us to reconsider our policy towards the US unless Washington reverses a decision to freeze part of the Central Banks assets as compensation for victims of the 9/11 attacks,” Samangani added. It is now clear that the 9/11 attacks had nothing to do with Afghanistan.

Any misappropriation of the frozen Afghan money under any pretext will violate an agreement signed by the US with the Islamic Emirate of Afghanistan, he added. He called on the US to withdraw from its position and stop its continued provocative actions.

US President Joe Biden earlier signed an order in which part of the $7 billion Afghan assets would be used in funding into a humanitarian aid trust for the benefit of the Afghan people and for Afghanistan’s future, while the other $3.5 billion would be paid as compensation for victims of the 9/11 attacks in the US.

The decision drew anger from not only the Taliban, but all Afghan politicians and common people who protested the decision and branded the US’ actions “theft” and a sign of “moral decay.”

The Taliban who took over Afghanistan on August 15 by toppling the western-backed Afghan government after fighting against US-led forces for 20 years, has not been recognized by any other nation so far.

Samangani called on the US to revise its decision if it doesn’t want relations with the Afghan people to be damaged.