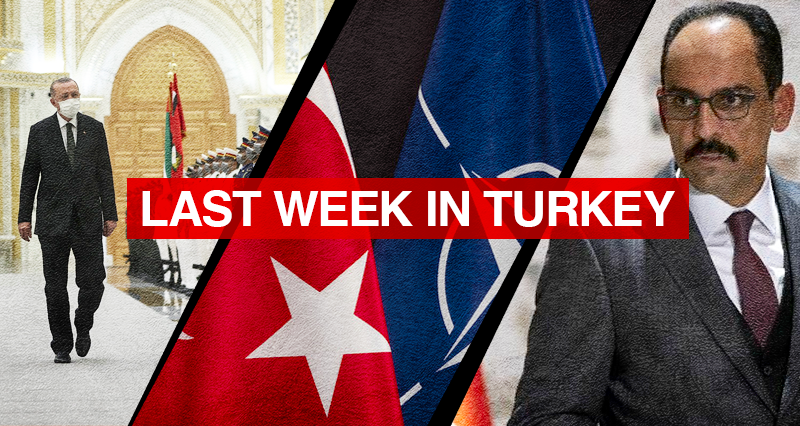 Last week, the public agenda in Turkey has been busy with 3 main topics.

Second was the 70th anniversary of Turkey’s ascension into NATO membership, subject to debates throughout the week.

The third topic was the recent development in the normalization process between Ankara and Tel Aviv.

Turkish President in the UAE

President Erdogan was welcomed on past Monday at the Abu Dhabi International Airport by UAE Minister of State for Foreign Trade, Turkey’s Ambassador to Abu Dhabi and Turkey’s Consul General in Dubai.

According to the Turkish Presidency, Erdogan said: “The complementary structure of the economies of the two countries actually points to a potential far beyond the current figures.”

“The purpose of our visit is to quickly realize this potential,” he added.

The protocol aims to increase friendly relations between the two countries and to develop relations in the fields of media and communication.

According to the protocol, the two countries will encourage mutual visits of representatives from the media and communication world every year in order to get to know each other’s current economic, political, cultural and social lives more closely and to exchange views on communication activities.

There will also be mutual internship and training opportunities to young journalists, media members and technical staff of the two countries.

President Erdogan’s “significant visit would create further momentum to strengthening cooperation and building a new prosperous phase of partnerships for the higher good of the two countries, their peoples and all the nations of the region,” the state-run Emirates News Agency quoted Al Nahyan as saying.

The two leaders “reviewed the prospects of further consolidating bilateral relations and advancing cooperation and joint work between the two nations in various fields in addition to the latest regional and international issues and developments of interest,” the news agency said.

President Erdogan has lauded his country’s investment advantages to business people in the United Arab Emirates as the two countries seek to build economic bridges after years of animosity.

“Our mutual goal is to carry our bilateral relations to much higher levels in all areas,” he told a business event on Tuesday. “Turkey provides very important advantages for investors looking for alternatives to Asia-centered production areas.”

Last week has been the 70th anniversary of Turkey’s NATO membership.

The anniversary was characterized by debates on Turkey’s membership, rather than celebrations.

As the 70th anniversary of Turkey’s membership was commemorated, the head of Communications Directorate Fahrettin Altun has described Turkey as the center of future NATO geopolitics and stressed that its contribution to the global peace and stability through the alliance will continue.

“Turkey is a country at the center of the NATO’s future geopolitics. Turkey is a part of NATO as it should symbolize the security and stability in the international arena, not because the bi-polar or multipolar world system obliges,” Altun said at a conference in Ankara on February 17, the day of the 70th anniversary.

“Turkey has never hesitated to take part in the missions in the different corners of the world. Turkey has been avoiding criticizing the NATO for over 70 years, finding criticisms against the NATO baseless. It sought to resolve the problems it has with member countries under the NATO roof,” Altun stated.

The Turkish Foreign Ministry said on February 18th that it expects NATO members to “flawlessly display unity and the spirit of solidarity” that constitute the bedrock of the Alliance.

In a written statement for the 70th anniversary of Turkey’s membership in NATO, the ministry said Ankara would be resolute in pursuing efforts, particularly in the fight against all forms and manifestations of terrorism that threaten not only Turkey but the entire Euro-Atlantic region, so as to protect the security and stability within a 360-degree approach.

The Vatan Party leader Dogu Perincek explained his party’s statements on the issue, while criticizing the government officials’ statements on Turkey’s membership.

“You cannot fight the powers who plotted the July 15-16 coup attempt with such statements. You cannot fight FETO with this either. It was NATO who established FETO and placed it within the government ranks. FETO got all its power because it was a part of Operation Gladio. They jailed our Army commanders and Vatan Party members, as a part of Operation Gladio. I only see an oath of service to NATO. If you serve NATO, you cannot serve the Turkish people. You cannot provide the security of Turkey either. Such pitiful statements… This is a statement that ignores the problems that Turkey faces, and a statement that misinforms the Turkish public. These people basically say “I can be a cannon fodder for the NATO”. No, you cannot. I challenge you: Turkey cannot be a cannon fodder for NATO and it will never be. No one can stay in power with such a mentality.”

The Turkish delegation visited the Palestinian President Mahmoud Abbas and other state officials in the first day of the visit on February 16th.

On the last day of the visit, the delegation met with the Israeli General Directorate of the Foreign Ministry Alon Ushpiz, Israeli Presidential Office General Director Eyal Shviki and some other top officials from the same institute.

In their visit to the Palestinian President Mahmoud Abbas and Foreign Minister Riyad al-Maliki, Kalın noted that the latest situation in the Palestinian crisis, the issue of Jerusalem, the Al-Aqsa Mosque, the national reconciliation process and some other topics were discussed. He stated:

Kalın pointed out that they also discussed about the preparations of a common ground for Israeli President Isaac Herzog’s visit to Turkey in March.

The Presidential Spokesman stated about the contacts he made in Israel:

“We had the opportunity to evaluate the bilateral relations of Turkey-Israel in different aspects. We also, of course, discussed the Palestinian issue. We had the opportunity to discuss the regional developments aside only the Palestinian issue and the bilateral relations. We discussed the developments in the Gulf region, in Syria, in Ukraine and many other issues on our agenda.”

“We believe that the further steps which we will take with both the Palestinian and the Israeli sides will make some important contributions both in resolving the Palestinian issue, and in achieving peace in the Middle East, and ensuring the regional peace and stability and security for all parties and regional actors.”

“Today the President of Israel, Mr. Herzog, also attended a part of the meeting. We had the opportunity to discuss the main topics of the meeting with him as well” he said.

Assessing the dialogue and opening-up trend within the countries of the region, Kalın stated: “As soon as Turkey sees a positive attitude, it responds with even more positive steps. Therefore, we should also see the positive steps to be taken with the United Arab Emirates, Israel, Armenia and Saudi Arabia in this context. If there are some differences of opinion between two countries, there are always some mutual positive steps that can be taken to resolve them. It is necessary to also see the process with Egypt, in this context.”

Kalın stated that the steps taken simultaneously with the Palestinian and Israeli sides, will continue to contribute to bilateral relations and the regional stability, and that they are pleased with the results of the visit.

Meanwhile, the Deputy Foreign Minister Onal stated that the most important element of the visit is sustainability, adding, “We hope tat the visit by the Israeli president in particular, will be the first step in terms of sustainability.”