The Ukraine crisis: the USA is looking to regain the Europe it lost 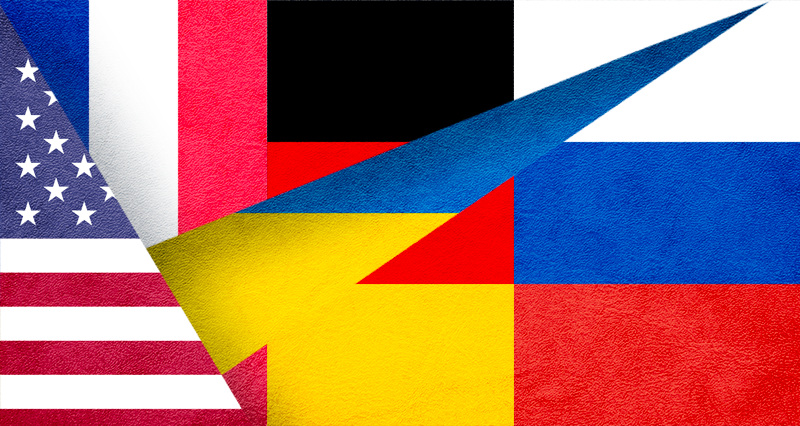 A lot has been written and said about the crisis in Ukraine. The debate has been filled with unnecessary details alongside an overload of disinformation. The reality, however, manages to shine through the mud, simply and forcefully, as it always has been.

The USA, now struggling to keep up with its claim of a unipolar world after the collapse of the Soviet Union, tries to regain what it lost and to strengthen its alliances through a new illusion of a cold war.

The primary reason behind the USA’s insistence on keeping the conflict on the agenda is not to contain Russia but to prevent it from claiming the Europe it lost.

To make a concrete list of the aims of the US -and its Anglosaxon ally the UK:

1. To sever the ties between Russia and Europe

It is no coincidence that the Nord Stream II Project is now in the crosshairs of US President Joe Biden, while the crisis in Ukraine is going on.

A thorough analysis suggests that the Moscow-Berlin-Paris line regains its functions in energy and commerce despite all the disputes and conflicts and this situation has political ramifications.

Germany and France, despite all the pressure that is put on them, have not aligned themselves with the US on the matter of Ukraine.

“Let us not let the Americans drag us into a position we do not adopt. Our interests on the Ukrainian issue differ from that of the US, we wouldn’t prefer threats or a conflict”, said the French Minister of the Economy Bruno le Maire, clearly summarizing the disengagement between Washington and Europe.

2. To revive “the brain-dead NATO”

“NATO has experienced its brain death,” remarked the French President Emmanuel Macron which was a public declaration of the collapse of NATO, an important bridge of cooperation between the US and Europe.

Even though Washington tries to revive “the brain-dead” NATO over the Ukrainian issue, Germany and France are reluctant to engage in military action.

3. To contain and wear out Russia

Washington continues its strategy of containing Russia. Accordingly, Ukraine and Kazakhstan must be analyzed together.

Washington tries to contain Russia from the West over Ukraine, whilst have tried the same from the East over Kazakhstan, yet failed. It must be noted that the cooperation between Russia and China was the primary reason behind Washington’s failure in Kazakhstan.

The result of the Ukraine crisis: Towards a Moscow-Beijing Bloc

The most direct result of the Ukrainian crisis was that the collaboration between Russia and China has evolved into a common political stance.

Moscow and Beijing, concerning the Ukrainian crisis, have assumed a common stance against the rising US aggression.

Russian President Vladimir Putin and his Chinese counterpart Xi Jinping have released a joint statement following their meeting in Beijing, a declaration of the formation of an Eastern bloc against the Atlantic.

Emphasis on multipolarity and anti-NATO remarks in the statement suggests that Moscow and Beijing will abandon their defensive positions in favour of a more audacious strategy.

Surely, this will have different ramifications. European countries, which we may call intermediary forces in the struggle between the Atlantic and the East, shall refrain from antagonising a colossal bloc of Russia and China. On the other hand, Washington’s propaganda that puts the “Atlantic union against the East” shall intensify.

In line with this situation, how China shall back up its discourse of “avoiding a new cold war” to convince its European partners, is yet to be seen.

The bipolar world of post-World War II was declared in Yalta. Reagan-Thatcher doctrine, after the collapse of the Soviet Union, has led to the forceful installment of unipolar US hegemony to the world.

Now a process which may be called a third era is coming up. The USA insists on reducing this new era to an equation of East and West. We shall continue to discuss whether China and Russia shall conform to this equation, and if not, how they would respond.