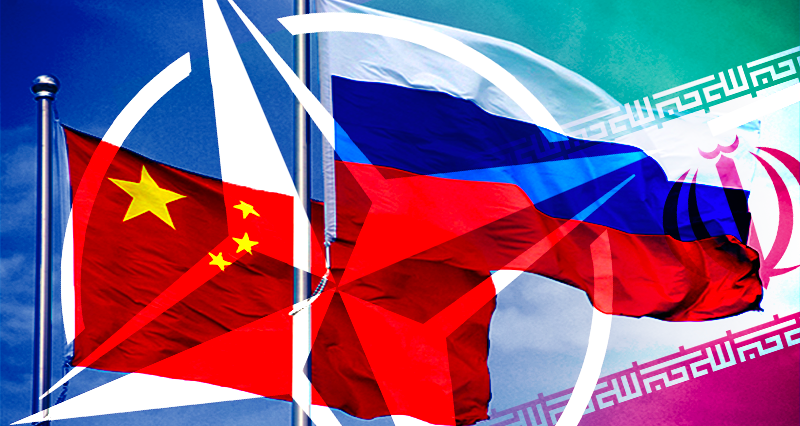 Putin’s visit to China and meeting with his Chinese counterpart, Xi Jinping and the subsequent signing of a cooperation agreement between the two countries had significant feedback in the Persian-language media around the world. While the Iran-based media had a positive perspective toward the trip and considered the interactions as further uniting the Eastern Front against the West, the Persian-language media in Europe and the United States considered and evaluated the visit as an effort by Russia and China to praise a Cold War against the West.

After Raisi’s visit to Moscow, and especially the crisis in Ukraine, Iranian public opinion is still focused on Russia and its developments. From this perspective, Putin’s visit to China and the cooperation agreement between the two sides were significantly reflected on Iranian media.

The Iranian media considers the Russian-Chinese relations as strategic. At a time when NATO is trying to prepare for a wide confrontation with Russia in Ukraine and Belarus, and the US is putting pressure on China. Iranian media evaluates the convergence between the two Eastern powers as an issue that “could be costly for the West”.

Some Iranian media outlets highlighted that the two countries declared in the joint statement the “friendship between the two countries has no limits”. They interpreted the relations between Moscow and Beijing in the last two years as a proof of the truth for this statement and forecasted the two sides’ plans to continue and deepen cooperation. “The two countries’ common stance on the crises that threaten them has made China Putin’s first destination, after having stayed in Moscow in the last two years. The Russian president has made no foreign visit during the last two years. But now, while Western officials have diplomatically boycotted the Winter Olympics hosted by China under the pretext of human rights, the Russian president has arrived in Beijing as the most important guest to meet with his counterpart, Xi Jinping. This was the 38th meeting between the two leaders since 2012”.

Iran’s state news agency IRNA called Putin’s visit to China and bilateral cooperation between Moscow and Beijing as “The unwritten alliance of the East against NATO”, and reported about the increasing cooperation and mutual interest of the two sides against NATO and the US.

The official Iranian TV channel evaluated the meeting as a sign for transition from a unipolar international system to the establishment of a multipolar system that has been adopted in a new situation characterized by the globalization of the economy, the development of communication technology, development of artificial intelligence and the Internet, and the interconnectedness of societies in the international system.

The analysis that noted that the order that has prevailed in the world so far has been based on American domination and hegemony, concludes: “Now, with the emergence of new economic powers, countries are calling for fundamental changes in the economic, trade and international financial structures, as well as fundamental and structural changes in the United Nations, especially in the Security Council, and the increase of its permanent members”. It also considers the unilateral approach adopted by the former US President Donald Trump and his slogan of “America’s first”, derived from American hegemonic thinking, and evaluated that the convergence (between Russia and China) has resulted in the US’ increasing isolation in the world. The analysis added: “Even during the presidency of Joe Biden, who advocates a multilateralist approach, we can see the US escalating tensions in the international arena and aggressively confronting rival powers, particularly Russia and China”.

The Al-Alam News Network, another Iran-based media, also reported on the meeting and considered it as Russia’s active movement in the East as an attempt to change the balance of power in the international system. The report also claimed that the rules of the game of politics in the world, which used to work on the basis of European norms, has also changed.

Russian-Chinese model as a priority for economic development

Putin’s visit to China was also an excuse for Iranian experts to criticize the government for not paying attention to the Russian-Chinese model in order to increase the country’s strategic power against the West. An Iranian expert examined the economic growth of China and Russia over the past three decades in an article entitled “Numbers do not lie: we have not learned about our mistakes from China and Russia”. He considered the increase of political power of these countries on the world stage along with their economic power. The author also criticized Iranian officials for ignoring the successful experience of Russia and China in activating economic power in order to advance political interests.

Western media and attempts to blackmail

Along with this positive reaction of the Iran-based Persian media, the European based media tried to consider the meeting and the joint statement as a provocative action by Russia and China to increase the level of tensions in the world. Referring to the issue of Ukraine, the media emphasized that Russia is somehow trying to start a new Cold War. Considering these feedbacks of the media inside Iran, it can be concluded that the analytical and political society of Iran is increasingly emphasizing the importance of the new world order and is gradually taking a more positive perspective toward the experience of China and Russia. But in the meantime, the Western media, which has a considerable influence on Iranian public opinion, is trying to warn of the risks and negative consequences of Iran’s orientation to the East. The emphasis on the issue of US and Western sanctions against Russia and China by the pro-Western media inside Iran and the negative effects of these sanctions on the economies of these countries is aimed at emphasizing the superiority of the West in the global arena. But over time, and especially the 20-years freezing in nuclear talks with the West, Iranian public opinion is increasingly turning to the East.