The road to October in the Brazilian political scenery 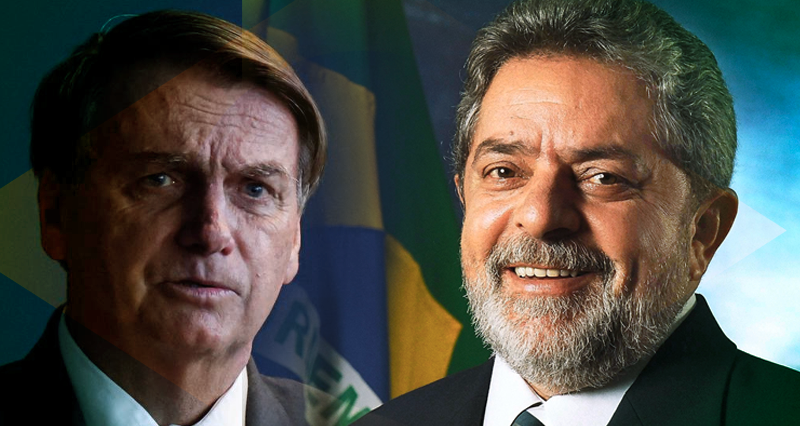 The October presidential elections in Brazil are one of the most important political events of 2022 in Latin America. What seems to be a traditional dispute between candidates in a representative democracy to determine the next president, in the country governed by Jair Bolsonaro is presented as a tense scenario where democratic continuity could be at risk.

The aspirations of the current president – who has been in campaign for his own reelection since he took office in 2019 – do not seem to be in line with the social mood reflected in the polls.  As published this week by the consulting firm Poder Data, former president Luis Inácio Lula Da Silva leads Bolsonaro by more than 11 points.

There, Lula leads with 41% of voter support over the current president, who reaches 30%. Behind them, the candidates Sergio Moro and Ciro Gomes, both with 7%, are competing in the name of a “third way”, where figures such as São Paulo Governor João Doria (3%) and Senator Simone Tabet (1%) also appear. If the election were held today, Lula and Bolsonaro would face each other in a second round, where the former union leader would beat the current president by 14 points according to the same poll.

In turn, in a runoff without Bolsonaro, Lula would also beat the other candidates. On the other hand, if the second round were between Bolsonaro and a candidate other than Lula, the president would be defeated in any scenario. The president’s difficulty is mainly due to his high rejection rate, which in the same survey was 60% and is the highest among the candidates to the Planalto Palace.

Although the campaign has not formally begun and more than nine months remain before the electoral dispute, opinion polls added to Bolsonaro’s recent statements about the reliability of the Brazilian electoral system – something already common in the president’s speeches – predict a complex scenario for the South American country.

Accusations of fraud by the president are a constant throughout his administration. After the events of September 7, 2021, when thousands of people were summoned by the government and its allies with anti-democratic slogans and threats of a coup d’état in Brasília and São Paulo, an agreement mediated by former president Michel Temer managed to diminish the president’s attacks on justice and the ballot box. However, with his popularity in free fall and his chances of reelection increasingly low, Bolsonaro resumed his strategy of attacks at the beginning of the election year.

With the pressures to moderate his discourse, even the Supreme Court warned about the consequences of those attacks, and also with his popularity difficult to recover, there are not few analysts who foresee Bolsonaro’s desistance to run for reelection. “It would not be unreasonable to seriously consider a scenario in which Bolsonaro gives up being a candidate for reelection, seeks to protect himself in a term as senator for Rio de Janeiro (eight years in office), and leaves the vein of the right more free for the growth of a candidacy capable of confronting Lula” argues Vitor Marchetti, political scientist and professor of postgraduate and graduate studies in public policy at the Federal University of ABC.

For Ignacio Pirotta, political scientist specializing in Brazilian politics, it is difficult to foresee the president’s movements in the face of the electoral dispute because of what each option would imply: “If he is going to withdraw, in April he would have to resign the presidency of the Republic, according to the legislation“. The law demands that in case of running for a legislative position (deputy or senator), the president must resign from his position up to six months before the dispute.

For Pirotta “that seems a pretty high price. But if the current scenario does not change between now and March/April, the future for Bolsonaro is bad, and if the economic and social situation worsens, I see it difficult for him to maintain his position as the second force”.

One of the main questions about the election concerns the support of the military forces that Bolsonaro would have in case of a conflict. With more militaries in government than during the last dictatorship and a series of benefits granted by the executive since 2018, the possibility of a coup adventure led by Bolsonaro would not seem so far-fetched.

In addition to the benefits of public functions, members of military police, firefighters and of the Armed Forces received salary increases. They also got positions in the executive and housing programs. At the same time, they were exempted from the pension reform that makes retirement conditions for salaried workers more flexible.

At the same time, the close ties with the military police of the presidential family in the midst of a scenario of tensions provoked by the president’s own threats, contributes to the doubts about the role that the security forces will play in the event of an eventual attempt of rupture.

As Ignacio Pirotta explains, “the departure of the three commanders of the Armed Forces in March last year showed a rupture between Bolsonaro and the military. How deep this rupture is I do not know, because clearly there are also different positions within the forces”.

Since former President Lula recovered his political rights, the Brazilian political map completely changed its configuration. The speculations about who would be the candidate capable of defeating Bolsonaro in 2022 seem to have been terminated with the return of Lula and his support in the polls.

Even in this scenario, the insistence for a third way candidacy by the elites and sectors of the financial market to escape the dispute between the current and the former president, has already begun to gain space for debate in the main media of the country. Months ago, the businessman Pedro Passos – chairman of the board of directors of the company Natura – went so far as to declare in an interview that “it is necessary to fight for an alternative that emerges from the polarization between the unacceptable reelection of Bolsonaro (PL), and the undesirable reelection of Lula”.

From the business logic, the reelection of the current president would be unacceptable due to anti-democratic outbursts, while the election of Lula da Silva would be undesirable due to the alleged risk of an interventionist economic policy, which would generate losses for the sector.

“In 2018, Bolsonaro unified anti-Petismo behind him, but then divided it. And the division that Bolsonaro has generated within the right wing itself, within the anti-Petismo or the conservative sectors, or however you want to define it, is such that many prefer Lula to Bolsonaro, or else vote white, as they said from the MBL, which would benefit Lula” maintains the analyst.

Who appears as a representative of this third way is the former federal judge Sergio Moro, material author of the convictions that left Lula out of the electoral race in 2018, where the polls showed him as a clear favorite. After making the election of the then candidate Jair Bolsonaro viable with this conviction, Moro accepted the position of Minister of Justice of the incoming government, from which he resigned after a year.

Lula is leading, what does that mean?

With polls showing former president Lula in first place and more than 40% of voting intentions less than a year before the election, speculations about alliances of the Workers’ Party with other acronyms began to gain prominence already by the end of 2021. Even with the favoritism for Lula and a social and economic context that may benefit such candidacy, the strategy of the former president aims at concretizing a number of alliances capable of winning the election already in the first round.

In this sense, the possibility of including the former governor of Sao Paulo and former presidential candidate Gerardo Alckmin – a well-known name in the financial market and in the Brazilian politic – raises doubts about the characteristics of an eventual third term of the former union leader, which evidenced the differences both within the party and in other allied acronyms.

In an interview granted to the newspaper Folha de São Paulo, former PT president Rui Falcão expressed what these sectors maintain about such an alliance: Alckmin represents a contradiction to everything the party proposes. Such criticism was exposed before the publication of a Manifesto against the alliance, where it is warned that Alckmin “has a long history of fighting against national, democratic, popular and development positions”, while pointing out him for having supported the coup against former president Dilma Rousseff (PT), in 2016.

Many analysts warn that in the context of polarization with the extreme right represented in Bolsonaro, an alliance of the left with center and right sectors could mean an early conditioning of an eventual third term of Lula. The experiences in the region show the potential of such conditioning, something that Lula himself insists on minimizing by saying that if he were to govern again, it would be to do more than what has already been done. On the other hand, the insistence of sectors of the financial market and Brazilian elites in supporting a second term of Bolsonaro responds to the pressure to sustain the economic model of state reduction, labor flexibilization and more benefits for the private sector and banks, something that reinforces the idea of the conditions that may weigh on Lula after 2023.

With a little less than a year before the elections and in a context of uncertainty and instability generated by the government itself, there are more doubts than certainties about the normality of the electoral process scheduled for October and after that. The remaining months until the dispute will be decisive to know what will be the fate of Brazilian democracy.

* Ana Dagorret is journalist from PIA Global specialized in international affairs and based in Rio de Janeiro. She is the co-author of the book “Manual breve de Geopolitica”.