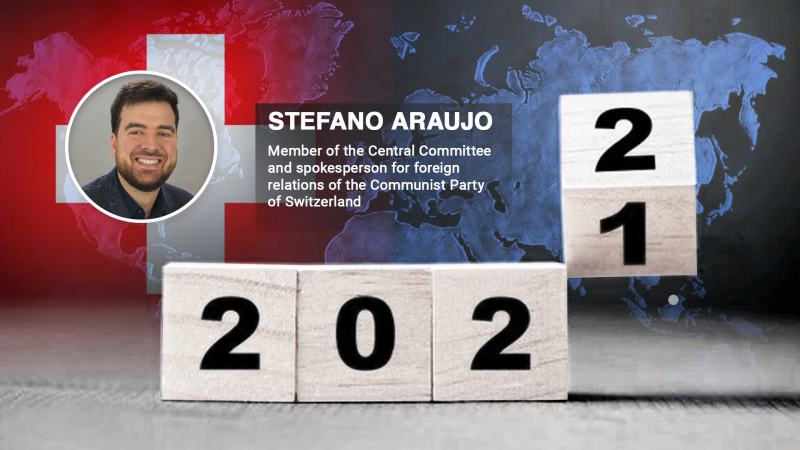 United World International continues the article series, where international experts evaluate the year 2021 and present their predictions and expectations for the year 2022.

Today we present the article of Stefano Araujo, Member of the Central Committee and Spokesperson for foreign relations of the Communist Party of Switzerland.

With regard to the activity of our Party in 2021, we are very satisfied. Firstly, the Party has managed to enroll new militants, especially young ones, and regained the support of classic sympathizers and members of the ‘old guard’ who had drifted away as a result of the previous revisionist leadership.

Secondly, we managed to achieve an important victory: our proposal to include the principle of “Food Sovereignty” in the Constitution of the Republic of Ticino, to promote local agriculture and give priority to self-sufficiency in food, was accepted on June 13 2021 by 62.1% of the citizens.

At the municipal level, there have been several victories, which have enabled us to improve the living and working conditions of workers. Finally, on November 27/28 2021, the 24th Party Congress took place in Bellinzona. During the Congress, our General Secretary, Massimiliano Arif Ay, was reconfirmed as the head of the Party, while a number of young people with experience in the student union and the Party’s youth movement joined the newly elected Central Committee.

The Congress was a success: delegates from the cantons of Zurich, Geneva, Aargau, Berne and Vaud were present, and for a party like ours, initially rooted in only one region of the country, the Italian-speaking one, this was very important. We also received almost a hundred greetings from Swiss and foreign authorities, movements and parties. The Chinese Ambassador to Switzerland sent us a video message, the former Serbian Prime Minister Ivica Dadic wrote us a letter and the former Italian Minister of Justice Oliviero Diliberto paid us tribute with a video.

Our thoughts on Switzerland in general in 2021 are mixed. On the one hand, we congratulate the Swiss population, which rejected with 51% the government’s CO2 law proposal, which threatened to increase taxes on petrol consumption or heating in an anti-social way, as the taxes would have been an additional burden on workers. Swiss communists have been active in the left-wing committee against new ecological taxes, pointing out that those who have to pay for the climate crisis are industry and finance, those who are the real producers of pollution, not ordinary citizens.

As far as the pandemic crisis is concerned, the fact that Switzerland has remained anchored to the interests of Big Pharma, only allowing the inoculation of mRNA vaccines produced in the West and not allowing, for example, the import of Russian, Chinese and Cuban vaccines, has been a source of criticism from our Party, who have repeatedly called, even at parliamentary level, for a diversification of supply, while pushing to begin producing vaccines in Switzerland to ensure national self-protection. From this point of view, the Swiss government has written us a letter assuring us that the issue will soon be analyzed: in short, even the bourgeois have realized the shortcomings of our health system, which is deeply dependent on foreign countries.

From the point of view of Swiss foreign policy, we congratulate the national government for deciding to block the negotiation of the so-called Framework Agreement with the European Union, which would have caused not only a greater dependence from Brussels and a loss of national sovereignty, but also the worsening of working conditions, as it would have created a greater competition between resident and foreign workers, since the few measures of protection of the labor market present would have been canceled.

On the other hand, we are disturbed by the national government’s decision to purchase 36 North American F-35A military jets to add to our army’s already disproportionate fleet of military aircraft. Buying U.S. aircraft is not only a violation of our neutrality, but also represents increased dependence on Atlantic technology and interests. Swiss communists, together with true pacifists and patriots, are part of the political coalition against the purchase of NATO military jets with the slogan: “We don’t want the CIA in our cockpits”. The dependence of the Swiss armed forces on NATO weapon systems is reaching worrying levels.

Finally we express our disappointment that all EU countries have and are actively participating in the growth of Russophobia and Sinophobia. More and more European parties (including left-wing ones but also so called “nationalists”) together with the press of the regime, spread fake-news about China and Russia, the promoters of a multipolar and peaceful world contrary to the U.S.’ interest in maintaining a unipolar world structure with dynamics dictated exclusively by the U.S. imperialist interests. Emblematic is the case of the German Greens, who, from being friends of the pacifist and anti-militarist movement, have grown close to NATO after the option of a government with German liberals and social democrats opened up for them. We have denounced this in our Party press. Europe is a slave of the United States and the recent warlike developments of NATO in the former Soviet Republics are the proof.

Expectations and positions for 2022

First of all, our Party will start working on the legislative elections of the Republic of Ticino that will take place in April 2023: we have to defend our two seats, and it will be difficult. Although parliamentary presence is very important for us, the crucial challenge is to strengthen the organization of our Vanguard Party: being a party without financial resources and composed mostly of young people and students, it becomes very difficult to assure we stay ideologically and organizationally independent.

Although we do not ignore the existence of what Lenin called the worker aristocracy and therefore the integration of the trade unions in the imperialist system, our last Congress established the importance for the Communists to actively participate in the Swiss trade union movement by removing it from the influence of the Trotskyists and reformists: the trade union represents the last remaining unitary and communitarian spaces within our post-democratic and hyper-individualist society where the working class is being increasingly exploited and subject to precarious conditions.

Finally, one of the objectives of the Party is to extend the activities of the Swiss Peace Movement, a historic national association and member of the World Peace Council, which for decades has been fighting for the promotion of peace worldwide on an anti-imperialist basis. It is necessary to avoid the continuation in the peace movement of the nefarious hegemony of anarchists, Trotskyists and spiritualist followers of nonviolence who advocate the theory of equidistance that opposes Eurasia.