“We don’t want NATO military at our borders” 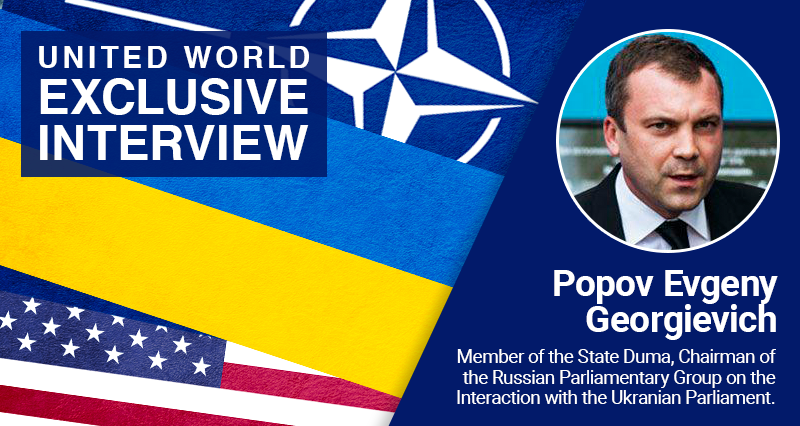 The world’s eyes are on the crisis unfolding in Ukraine. The possibility of a war between the U.S. and Russia over Ukraine is discussed widely, while NATO members continue to mount up forces along the Ukrainian-Russian border.

United World International expert Onur Sinan Güzaltan interviewed the Russian Member of State Duma Evgeny Popov. Popov is the Chairman of the Commission responsible for relations with Ukraine in the Russian Federation State Duma. The interview deals with the possibility of a US-Russian war, the prospects for the crisis in Ukraine and the relations between Turkey and Russia in the context of the tense Black Sea region.

First of all, thank you for accepting our interview invitation. The world is watching the Ukraine. Do you think a war is possible in Ukraine in the short term?

I don’t see that possibility in the short or long term. I think a war between Russia and Ukraine is just a hysteria originating from the western countries.

What we do have in reality is a media war; we face an international attack from the Western countries towards Russia. Because even Ukraine tells us that, they don’t see any threat at their borders right now.

Of course we have military at our borders and in our territory. Of course we make some military exercises, but these are just a response to NATO countries flying along our borders with bombers. We have the duty to protect our people and to protect Russian citizens. In spite of that, I still believe in a diplomatic solution.

Now we just see how Washington tries to scare the Ukrainian people and the Europeans.

“Pull back from our borders, get out from the post-Soviet countries”

How do you evaluate the US policies concerning Ukraine? Could Russia and the United States face each other militarily in Ukraine?

There is an old joke, that Russia and the U.S. going to fight until the last Ukrainian… That’s just a joke for us, but I think it reflects Washington’s view on the issue.

We have sent a list of threats to the US.

Our demand is simple: “Please pull back from our borders and get out from the post-Soviet countries. We don’t want any NATO military at our borders.” This is our historical sphere of influence, which should be cleared from NATO missiles, tanks, military bases and infrastructures because they constitute a direct threat to Russian citizens.

If you listen Putin, he repeatedly says that any modern NATO missiles could reach Moscow in 5-7 minutes, if deployed to that sphere. This is unacceptable for us. Because some decades ago NATO was pretty far away from our borders, we had buffers zones. We should now reestablish these again. I don’t think we are going to war with either the US or the EU.

The US wants to exclude Europe from our gas and oil infrastructures, and they want to establish American gas/oil dominance over Europe. As you know, %40 of German gas is coming from Russia. The German industry giants such as Mercedes or other companies need that gas.

The US wants to control the EU’s economy, yet they are not able to do it right now. From their point of view, that is the problem they seek a solution for. But I don’t think that this all will end up with war, because nobody would win this war. It would result in a total destruction.

“Ukraine is in a difficult situation economically”

Do you think there is a disappointment about the USA in Ukraine?

What we see now is that even Zelensky is arguing with Washington. He is telling them that the Ukrainian economy has lost 12 billion dollars in the recent times. He stated that in a press conference yesterday.

This war is just hysteria. Because no one in Russia even wants to go to war with a Ukraine that already lost 12 billion dollars.

I understand that Kiev wants to get some support from the US, but until now they only got military support of only some small arms and old military cars. The U.S. have failed to put up any investment or support for the Ukrainian economy.

Nobody wants to improve or invest in Ukrainian infrastructure or other economic areas, and this constitutes a huge disappointment for Ukrainians.

We had a trade volume of 50 billion USD between Russia and Ukraine, but now the number is around 10 billion or even less. They lost access to our market and didn’t get any new markets. They wanted to reach the European and the American market, but nobody in the West wanted to welcome them.

That’s tragic for the Ukrainians, for their working and middle class. They received some military equipment but did not get any support for their economy. Ukraine is now in a difficult situation economically.

On the other hand the public debt of Ukraine is growing more than ever, since nobody gave those military equipment as gifts and they had to pay for every military plane that landed on their territory.

So, I think the Ukrainian people are disappointed with this kind of support. They want more on support on economy and not for the military.

“European countries should defend their own national interests, not Uncle Joe’s”

Do you believe that the USA and Europe follow different policies regarding Ukraine?

I want to believe in it, but all we see now is that there is not an independent and a sovereign European Union right now. We observe a huge American influence on European decisions.

I understand that the US constitutes a huge market. Germany wants to trade with them, their trade is reaches 100s of billions of dollars.

But still, Germany also has a strong economy and I don’t understand why the Germany insists on being so dependent on the US. And we can say the same for Paris, Brussels or other European countries. Unfortunately they still have a huge dependence on the US.

We see some economic conflicts about NordStream 2, but if Germany were an independent country NordStream 2 would already have operated. But we do not see that happening now. The pipeline has been finished 6 months ago, and we are able to transmit gas from Russia to Germany by NordStream 2 right now, even tonight. But they do not give the permission for it. This is only result of political reasons; there are no economic or technical difficulties.

How do you evaluate the future of the Minsk process?

The Minsk process is quite difficult for me and for anyone. Putin still acts in accordance with the Minsk Agreement and the situation for the U.S. is very tough.

Back then, the Donbas rebels had surrounded the Ukrainians and Putin saved Poroshenko, his army and the capital Kiev. But we don’t see any progress on the implementation of the Minsk Agreement. Kiev does nothing to implement the agreement. And, personally I do not believe in the agreement.

At the end, Russia will recognize the Donetsk and Lugansk Republics diplomatically.

And we will protect our Russian citizens, whose official numbers are around 720.000 in the Donetsk and Lugansk regions. That’s of course my personal opinion. But our diplomacy still follows the Minsk Agreement.

Turkey offered to mediate in the Ukraine conflict. On what ground can Turkey and Russia cooperate on Ukraine?

This was the most difficult question.

Ankara observes Crimea very carefully and they think that it also belongs to the Turkish sphere of influence. And they are against the reunion of Crimea with Russia, which they consider an illegitimate annexation. In same way, Turkey supports Kiev with armed air drones.

But on the other hand, we have a huge trade volume with Turkey, a nuclear agreement, some agriculture, pipeline, oil line projects etc.

And the same way we should be careful in the Ukrainian crisis with Turkey. Unfortunately, two countries have some different views.

But take for instance in Syria: Here, we have different views as well, but we can still talk about the conflict. Our presidents meet and discuss this subject frequently. And that’s very good.

We are going to support the Donbas.

But the most important thing is, we can still reasonably negotiate with Turkey, which is a brilliant thing.

What is Moscow’s expectation from President Erdogan’s visit to Kiev?

They can discuss anything. These are their bilateral relations between two independent countries.

Of course, it’s pretty dangerous that Turkey continues to provide weapons to Ukraine.

But I think President Erdogan and President Putin will reasonably discuss this situation.

They are quite honest towards each other. And I believe they will find some solution.

For long a time Ankara has been supplying weapons to Kiev, and Kiev had been using them in Donetsk and Lugansk. What will be the end of this?

But what do you exactly think about the Turkish mediation proposal?

Some countries propose to mediate between Putin and Zelensky. But I think that the two leaders do not have any topics to discuss. They already had a long meeting in Paris, but Zelensky didn’t come up with anything.

I think Putin has to say to Zelensky that he is a bad negotiator. In short, there is nothing to mediate between and no topic to discuss between these countries.

What is Moscow’s view of the Montreux Convention? How can Turkey and Russia ensure the security of the Black Sea?

But we know that Turkey wishes to construct a new canal (Canal Istanbul) and the Montreux Convention covers only natural waterways. It might the NATO some space of maneuver to enter the Black Sea. This might be dangerous, because currently, we have a convention that can prevent any risks of war in the Black Sea.

We have strong rules about who can or cannot be present in the Black Sea.

Of course, we don’t want to see hostile aircraft carriers in Black Sea.

Of course, our presidents should also discuss this topic.

We respect Turkey, and you can build anything that you want on your territories. It’s your right after all. But the Montreux Convention is one of the most important agreements and we should take care of it seriously.