Another coup against France: Burkina Faso 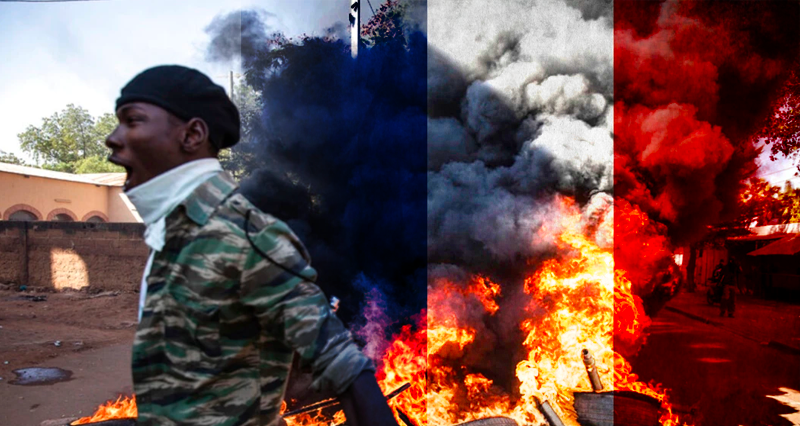 The anti-imperialist trend continues to strengthen in West Africa. The ECOWAS’ decision of sanctions against Mali and Guinea, taken upon pressure by the US and France, has not been able stop a change of policy in Burkina Faso. In December, the French military convoy, carrying equipment to the Burkina army as part of Operation Barkhane, was stopped by the people, and the soldiers were accused of collaborating with jihadist groups. The anti-French movement grew in Burkina and the military finally seized power despite sanction threats.

The people of Burkina took to the streets at the capital Ouagadougou to show their support for the Patriotic Movement for Safeguarding and Restoration (MPSR), which now rules the country. During the demonstrations, the French flag was burned and anti-French slogans were shouted. In addition to the Burkina Faso flags, Malian and Russian flags also stood out in the crowd.

The demonstrators carried portraits of Thomas Sankara, the country’s former president and revolutionary hero, who was assassinated in 1987, and Colonel Assimi Goïta, head of Mali.

“As far as we’re concerned, it’s not a coup,” school teacher Julienne Traore told AFP news agency during the celebrations. “It’s the liberation of a country, which was being governed by people who were incompetent,” the teacher added.

This week, life in the capital began to return to normal, according to local news outlets.

It is stated that political parties also share this normalization of life. The 41-years-old leader of the military administration, Lieutenant Colonel Paul-Henri Sandaogo Damiba, promised to consult all forces in the country regarding the transition process and roadmap a promise welcomed by political parties. Military leaders also met with civil society and private sector leaders for consultation. On Friday, Lt. Colonel Paul Henri Sandaogo Damiba hosted this meeting in the capital.

Boubacar Sanou, Deputy Chairman of the Democracy and Progress Party (CDP), is one of the volunteers to participate in this transition process. In his statement, Sanou emphasized that the only way to be in power is through the ballot box, but there may be some conditions that justify resorting to other means.  He says that the state is facing a rapid destruction in Burkina Faso, making necessary to find a solution fast. “We can therefore only take note of this and see how we will support them”, said Boubacar Sanou.

Another political party, the Convention for Development and Succession (CDR) invited in a declaration the entire population to work for the construction of peace. They emphasized that the CDR encourages the MPSR to pursue consultations with all the political forces of the nation as well as the Burkinabè of the diaspora for an inclusive transition process accepted by all. They called all actors to act in a spirit of patriotism by putting forward the best interests of the nation.

There is no question of staying behind from the process, says Lassané Sawadogo, executive secretary of the MPP, the party of the deposed president, “We have two major concerns. The first one is the restoration of democratic order in our country. The second concern is to prevent our country from collapsing. It is a country that is very vulnerable to terrorism, to the consequences of terrorism, and we have an obligation to work together, hand in hand. So there is no question, for us, of boycotting anything. We are even convinced that it is through dialogue that we will be able to find answers to certain questions.”

Besides, the mining groups active in the country stated that the coup by the junta – led by Paul-Henri Sandaogo Damiba – might not harm their activities.

Gold producers want to adapt to the Damiba government

The new regime “will want to be viewed as business-friendly,” Andrew Bell, managing director of Red Rock Resources, told The Africa Report/Jeune Afrique. He also emphasized that the new regime led by Colonel Paul-Henri Sandaogo Damiba “seems to have a patriotic spirit” and according to the specialist, the military government’s goal “could be a more effective governance”.

“If the new leaders can provide a solution to the security failures, it would be positive”, believes Andrew Bell, Boss of the extractive sector present in West and East Africa.

French President Emmanuel Macron on Tuesday condemned what he called a “military coup” in Burkina Faso. Macron said that France was “clearly, as always” in agreement with the West African regional grouping ECOWAS “in condemning this military coup”.

The ECOWAS Presidents, condemned the coup d’état and expressed their deep concern over the resurgence of military coups in the region: “After the coup d’état in Mali on August 18, 2020, another occurred in Guinea on September 5, 2021, and in Burkina Faso on January 24, 2022.”

After the military group seized power in Burkina Faso, it’s first announcement was to re-open borders. With this step, Burkina Faso, which borders Mali, effectively breached the sanctions of ECOWAS against its neighbor.

The change in Burkina Faso was also positively received by Mali. Ibrahim Ikassa Maiga, Minister of Refoundation of Mali, who attended United World International’s Webinar, described the developments as “positive” and added that “other African countries are next.”

Experts share the view that the regime change in Burkina Faso will put France in a difficult position. A coup in Chad in April 2021, Mali in May 2021, Guinea in September 2021, and finally Burkina Faso… It is discussed that the movement in Africa will spread further and ‘Françafrique’ will end in 2022. Western experts also agree that France is in a difficult situation in Africa.

Speaking to Reuters, “This (coup in Burkina Faso) puts the French in a difficult position because they’ve come down hard in Mali“, said Michael Shurkin, a former CIA officer and director of global programs at 14 North Strategies consultancy.

Speaking to the Atlantic Council, Cameron Hudson, a former director for African affairs on the staff of the National Security Council says the security operation of the US and France in the Sahel had been ongoing for more than a decade, becoming increasingly criticized by outside observers and local citizens alike. Critics point to the fact that extremist attacks and civilian displacement have only increased since the operation began. So in protests this week in Burkina Faso—and earlier this month in Mali—massive crowds supported the military takeovers and to demand the withdrawal of French forces.

A jihadist insurgency that spread over Mali’s border has killed more than 2,000 and forced 1.5 million to flee their homes since 2015.

According to the analysis published in Le Monde, the French influence in the Sahel is questioned: “Nine years after the start of the military intervention, the areas controlled by the jihadists have expanded, states have continued to crumble and anger against the French presence has continued to rise.”

Burkina Faso is the 3rd biggest site for gold exploration and the 4th largest gold producer in Africa. It is also the fastest growing gold producing region in the World. Currently, more than one million Burkinabe citizens work in mining sector.

Burkina Faso seems to be one of the important theaters of the great power competition in Africa in the coming period due to its geopolitical location and its given and potential resources.

The Macron administration is trying to keep Europe, which has started to withdraw from the region in the theater, while seeking to regain its lost regional position with colonial desires. Macron enjoys also the full support of the USA in this process. However, his efforts of do not seem to yield much result. The Western press questions, “Which African country is next?”

China and Russia, which try to establish good relations with the anti-French administrations in the region, oppose the decisions presented in the United Nations Security Council (UNSC) against these countries. When France presented a proposal to the UNSC, which included sanctions against Mali, these two countries vetoed the proposal.

After the Mali administration, which demanded the withdrawal of the French army and announced its cooperation with the Russian army, it is a matter of curiosity whether Burkina Faso will take a similar step.

The Chinese Government and the Government of Burkina Faso have also signed the Belt and Road Initiative Cooperation Document in last November.