The importance of the CELAC – China Joint Action Plan Agreement 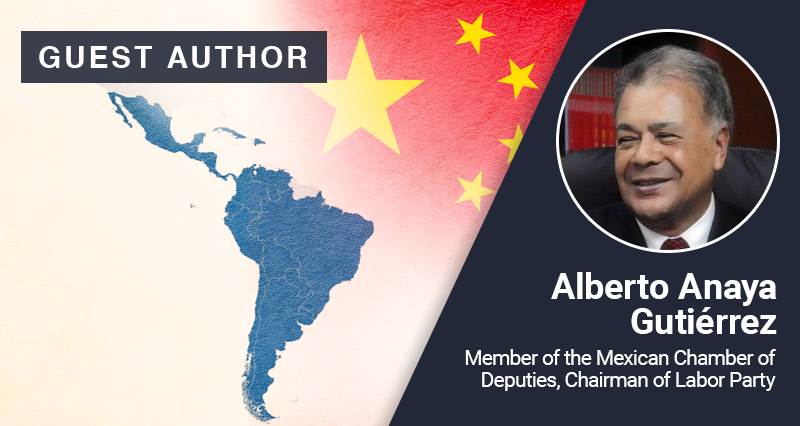 The Community of Latin American and Caribbean States (CELAC) has demonstrated the importance of maintaining international cooperation for the exchange of experiences, to articulate policies and practices to reduce poverty and to promote development for the benefit of the Latin American population.

As the Labor Party of Mexico, committed to the Fourth Transformation, we believe that at this time, on a global scale, the cooperation of Latin America and the Caribbean with the Republic of China is very important, especially given the fact that we are one of the regions most affected by the Covid-19 pandemic and the resulting economic inequality.

Let us remember that international integration projects seek to provide member countries with better competitive conditions and strength in the international arena for the development of their own economies, improving their capacities and expanding their opportunities.

Regional integration can also help nations exercise protectionism through the use of measures such as the establishment of rules of origin adapted in systems of open regionalism, which is characterized by large scale economic openings that allow for the development of a preferential regional  component, particularly when seeking to create economies of scale.

To this end, China and the Member States of the Community of Latin American and Caribbean States agreed to sign the Joint Action Plan for Cooperation in Key Areas (2022-2024), opening exciting new possibilities for both parties.

The signed document addresses political and security cooperation where both parties commit to strengthen high-level contacts and meetings between their leaders and representatives, also suggesting that a China-CELAC Forum summit could be held in 2024.

At a time of global geopolitical tensions which endanger peace, it is reassuring that the signing of this agreement will help us work together to facilitate the implementation of UN resolution 1540 in order to “effectively advance disarmament and the non-proliferation of weapons of mass destruction”. The agreement will also foster cooperation in the fight against all forms of terrorism and manifestations of transnational organized crime, including illicit arms trafficking, money laundering and cybercrime .

On the other hand, as part of the post-pandemic economic recovery process, China and CELAC will seek to strengthen exchanges between investment promotion entities and trade associations, as well as promote pragmatic cooperation between companies.

China has promised to provide “key support” to strategic projects that benefit the sustainable economic and social development of these nations, especially that of small island developing states, low-lying coastal states and countries of the Central American isthmus.

The signed agreement states that the parties aspire to expand bilateral and multilateral agricultural cooperation, strengthen scientific, technological and academic exchanges, and enhance exchanges and cooperation around the peaceful civil use of nuclear energy and technology to promote economic development and the well-being of the people, as well as to face the challenges presented by climate change.

In this regard, the signatories have agreed to increase cooperation in digital infrastructure, telecommunications equipment, 5G, big data, cloud computing, artificial intelligence, the Internet of things, and smart cities, among other issues, in addition to exploring the construction of joint laboratories.

On the other hand, they commit to strengthening exchanges and cooperation in the field of aerospace, civil aviation, public policies in the energy industry and its resources, tourism, transportation and environmental protection. They have also agreed to intensify dialogue on public health policies, deepen solidarity and cooperation regarding the covid-19 pandemic, work to eradicate poverty, promote mutual learning about the civilizations of China and the States that make up CELAC, and preserve cultural diversity.

Finally, China and CELAC assure their commitment to the 2030 Agenda for sustainable development with the aim of achieving a “more solid, greener and more balanced path of global development that assures no one is left behind”.

The signing of the agreement confirms that the CELAC-China relationship will be developed to meet the most urgent regional needs and challenges for development and promote regional cooperation on sectoral issues such as post-pandemic Economic Recovery and the Regional Health Strategy against Covid-19. It should be clear that it is totally legitimate for Latin American countries to seek to improve their relationship with China and promote trade with Asia as a form of diversification.

Regarding the growth of the Chinese presence in Latin America, let us remember that since its foundation in 2014, the China-CELAC Forum has favored strategic integration objectives in this region, and is one of the few integrating forums with a broad geopolitical vision, ensuring smooth regional cooperation while elevating CELAC’s relationship with China. It has allowed the Asian power to better understand our continent, which is very heterogeneous, both from an economic and political-ideological perspective, as well as from a social and cultural point of view, and even some initially skeptical governments have come to fully participate in the collaboration.

In this mutual relationship, which will only deepen after the signing of the agreements, both actors benefit: China is an important international actor interested in promoting new spaces for cooperation and CELAC understands China to be a thriving economy, a supplier of manufacturing and resource for technology transfers. For the CELAC region, China has been a powerful source of foreign investment, the second most important in the world at the beginning of 2022.

The leadership of Chinese president Xi Jinping must be highlighted in regard to China’s relations with Latin America and the Caribbean. Xi has demonstrated the political will of China’s leadership to establish new venues of international relations such as the Community of Common Destiny and the Belt and Road Initiative.

The signing of the China-CELAC agreement is intended to consolidate beneficial long-term alliances that go far beyond commercial relationships, playing a fundamental role in strengthening multilateralism, especially given the fact that China does not have hegemonic pretensions, and is instead seeking to promote international peace through cooperative mechanisms. CELAC, in turn, must strive to work in a coordinated manner, consolidating the CELAC area into an intergovernmental platform capable of working together on large scale collaborative projects.

It is worth attending to President Xi Jinping’s words on the topic: “History has taught us that the right path for humanity is that of peace and development, equity and justice, and cooperation for shared gains. Being developing countries alike, China and LAC countries are comprehensive cooperation partners of equality, mutual benefit and common development, and we are closely bound by the shared aspiration to pursue independence, development and reinvigoration.”

China attaches great importance to developing relations with CELAC, and supports it in coordination with the countries in the region to foster further cooperation and meet global challenges. President Xi also offered his thoughts on the potential of this partnership: “We are going to shape a new master plan for the joint construction of the Belt and Road and forge a route of transpacific cooperation with a view toward connecting and further strengthening our fertile lands in China and Latin America and the Caribbean, ushering in a new era of relations”.

We are in fundamental agreement with this sentiment, and are certain that the Fourth Transformation will be at the apex of this process of international cooperation. This spirit was demonstrated by Mexico when it was at the head of CELAC, and it was reiterated when the presidency was handed over to Argentina. We are sure that CELAC will maintain this policy of interregional integration and the creation of a system of development with total respect for national sovereignty.