Malian Minister on UWI: “We will foil French sanctions by cooperating with Turkey, Russia and China” 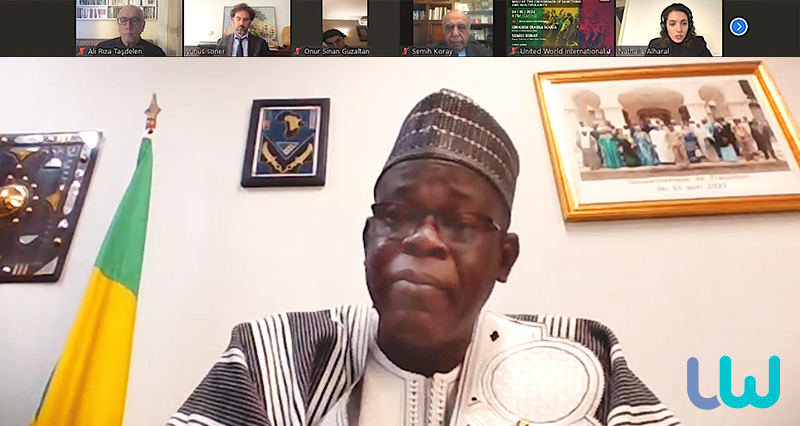 On January 24, United World International organized an international conference  “Mali at the Crossroads of Sanctions and Multipolarity”. Speakers were Ibrahim Ikassa Maïga, Minister of Refoundation of Mali and Semih Koray, Deputy Chairman of the Turkish Vatan Party.

During the conference, the speakers discussed sanctions against Mali, Mali’s cooperation with other countries, including Turkey, and the future of the anti-colonial movement in Africa.

On January 9, member countries of the Economic Community of West African States (ECOWAS) imposed sanctions against Mali. The justification was the postponement of elections of the country’s leadership for 5 years, until December 2026.

According to the unanimous opinion of the participants of the conference “Mali at the crossroads of sanctions and multipolarity,” the restrictive measures against Mali were taken at the initiative of France.

Ibrahim Ikassa Maiga denounced the Francafrique system as the main obstacle to the development of the region. According to him, the French authorities have internalized all UN means, using the growing terrorist and separatist threat in Mali to control the country. The control reached a moment where Malian Armed Forces could only upon French permission operate on their own soil. However, France was unable to provide real assistance to Mali in the fight against terrorism, so “Mali decided to say no to France, no to ECOWAS.”

“What we have seen in the last 10 years is that the government of Mali, the institutions of Mali did not make any own decisions. Decisions were taken elsewhere,” said Ibrahim Ikassa Maïga, noting this had brought Mali to the edge of becoming a “failed state”.

The Malian people and the current government have reacted to the situation by initiating the struggle for “new independence and new sovereignty”, said the Minister stating that his country also decided to engage more actively with other countries, especially Turkey, China and Russia.

Ibrahim Ikassa Maïga also stressed that Mali has a positive attitude towards the patriotic and sovereign policy of Turkish President Recep Tayyip Erdogan, the legacy of Mustafa Kemal Atatürk and would like to cooperate with Turkey, including in the “military” sphere.

In addition, the Malian minister stressed that Bamako is interested in attracting Turkish construction companies to Mali to develop infrastructure and expand trade and cultural ties between the two countries.

“We are accused of cooperating with ‘mercenaries’ – although it was clear that there was cooperation between the states of Mali and Russia,” said Ibrahim Ikassa Maiga.

Ibrahim Ikassa Maiga noted that this topic was “invented” by the French authorities, which seek to smear the Malian authorities through the media.

The Malian minister also stressed what the Bamako authorities see as a big difference between the interaction with the French and Russian military: Russia respects the sovereignty of Mali.

According to the Malian government spokesman, the cooperation with Russia is based on equality and mutual respect. “Today we are free to take the weapons we want, from whoever we want,” Ibrahim Ikassa Maiga noted. – The Russian military here are instructors who help us learn how to use this equipment – artillery, helicopters, or some new guns. Today we are free in our cooperation.”

“Russia is different! Russia sent us instructors to teach us how to handle what we procured. Malian soldiers are now fighting against terrorism, going on the offensive. The Russians are not at the front! The Malians are at the front,” stressed the minister.

According to the Malian representative, “Russia respects others”.

The origin of the problems is the neocolonialism of France

The ECOWAS actions are an attempt to avenge the sovereign policy of Mali to reject French patronage, Semih Koray stressed, speaking at the conference:

“The origin of the problems that Mali faces today is as in many other neighboring African countries the neocolonialism of France backed by the Atlantic System, which, in addition to economic, political and military threats and pressures, also makes use of separatist and extremist terror organizations to destabilize the country.

According to Semih Koray, “armed threats can be overcome by the armed forces; imperialist pressures and threats can be defeated by mobilizing the people. This is why the patriotic military ousted pro-French President Ibrahim Boubacar Keita on August 18, 2020. The Turkish politician said that in Mali there is an “alliance between the military and the people” and that France has no right to demand elections.

“Recently, France has been pushing for elections in Mali in February 2022. It is ironic that a country that saw nothing wrong with ruling the entire region as a colony by sheer force for more than a century is now so “squeamish” about election dates. The Republic of Mali, which obtained its independence and sovereignty not thanks to France, but in a struggle against France, has not bowed to this imposition and said that elections will be held in five years after security throughout the country and completion of the reintegration process.”

Sanctions as a tool of imperialism

According to Semih Koray, France is using the elections as an excuse to put pressure on Mali and change the regime in that country: from patriotic to foreign controlled. We, as the Vatan party, totally agree with the reaction of Mali to the sanctions, which resemble more a wartime blockade than a set of sanctions for specific areas, and we strongly condemn them,” added Semih Koray.

According to the Turkish politician, “today sanctions are widely used by the imperialist system as a hegemonic tool to interfere in the internal affairs of developing countries. Sanctions have been imposed against 42 countries, including Russia, China, Iran and Turkey, to help create dissent among people to push them to regime change, that is, to change a regime fighting against imperialist domination to one that capitulates to the imperialist system.”

“Mali and Turkey are on the same side in this struggle,” Semih Koray stressed. They face the same threats from a common imperialist source. The security of both countries is threatened by separatist and extremist terrorist organizations, both countries are subject to sanctions aimed at weakening the domestic front, both countries are subject to economic, political and ideological pressures and threats. Moreover, since one of the main axes along which Turkey is threatened is located in the eastern Mediterranean, including France among the threatening forces, there is some more specific geographic overlap in terms of common threats. Thus, we regard every success in Mali as our own success, and we believe that every action by Turkey, limiting the imperialist system, will also serve Mali’s cause”.