Insecure waiting under the comet: “Don’t Look Up” 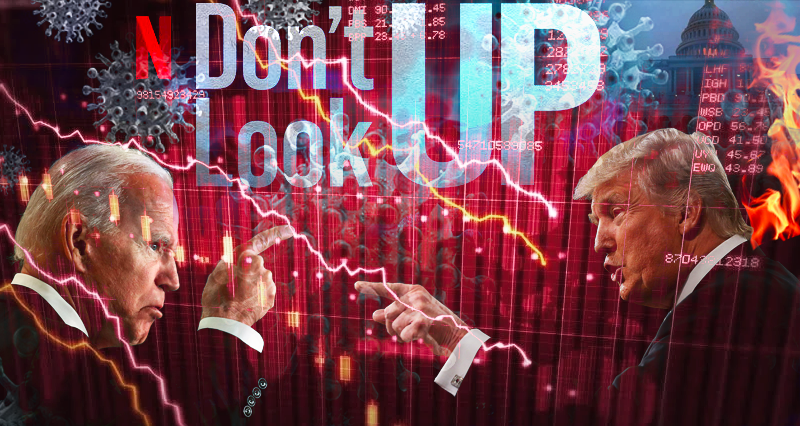 Note: This review contains spoilers for the movie “Don’t Look Up”.

Considered the founder of science-fiction literature, Jules Verne does not only in his masterpieces, but also in “Master Zacharius” and in his lesser-known works, such as ‘’Dr. Ox’s Experiment’’, deal with the conflict between science on one side and arrogance and conscience on the other. With an ironic language, Verne reflects the following themes in his works: losing mind to arrogance; dangers looming in science when it falls into the hands of unconscienced people and especially the share of people in that danger who live disconnected from the world. The satirical dimension, which was created very seriously by Jules Verne became a tradition by his followers.

“Don’t Look Up”, which is the most popular Netflix production recently and is reported to have been watched by hundreds of millions all over the world, is a typical example of the genre called black comedy and in this sense, it continues the Jules Verne tradition. With an important difference: This time, scientists are faced with the wall of arrogance and unscrupulousness built by politicians, media and capital. “Don’t Look Up”, written by Adam McKay, whom we know for his films such as “The Big Short” (2015) and “Vice” (2018), is related to Stanley Kubric’s unforgettable movie “Dr. Strangelove” (1964), albeit it tells a very different story.

A new page in sci-fi cinema

“Don’t Look Up” is an exception to science fiction and disaster movies that usually have a “Happy end”, and the movie even opens a new page by successfully reflecting the subconscious of today’s American society, considering that apocalyptic stories are generally the expression of social discomfort. The behavior of Americans in the face of political, economic and social crises is conveyed in a cynical style from top to bottom in this movie, bring attention to the process that has emerged with the last US presidential elections and following legitimacy crisis.

I am sure everyone heard the story, but in short: A comet with a diameter of nine kilometers that will destroy the world is approaching our planet during 5 months and, during that time, despite the screams of scientists, people continue to face the indifference, cynicism, panic, acceptance, disaster and the personal salvation efforts of a small elite group in the USA.

The fact that there are not many scenes about the behavior of the rest of the world in the movie shows that Adam McKay’s main aim is to criticize the US administration starting with the President, the US government system and different segments of society. Moreover, the emphasis on communal subversion and the inability to establish dialogue even in the face of the impending catastrophe serves as thick brushstrokes if we draw the apocalyptic as a painting. And the main point that distinguishes “Don’t Look Up” from similar works is that the movie doesn’t present the figure of “rescuing leadership”, which we are accustomed to seeing in Hollywood disaster-crisis-destruction movies. On the contrary, astronomer Kate Dibiasky (Jennifer Lawrence), who was the first to notice the comet approaching the earth and named after her, Dr. Randall Mindy (Leonorda DiCaprio) who told the world what’s happening and Dr. Teddy Oglethorpe (Rob Morgan) are more constructed as helpless messengers sounding doomsday criers than saviors. The President of the USA (Meryl Streep)’s end, as the cinemagoers who watched until the end of the credits will see, somehow saved herself but could not run away from inadequacy, makes us miss even President Thomas J. Withmore (Bill Pullman) who fought against aliens and saved the world with a gun in “Independence Day” (1996).

The forthcoming doom and the subconscious of American society

“The Politics and Ideology of Contemporary Hollywood Film” published by Michael Ryan and Douglas Kellner in 1990, which became a cult book in its field, states the following:

“The metaphor of disaster used in these films allows to avoid real forms of anxiety, but finally, the metaphor itself is a kind of aesthetic/political defense for threats to social ideals, a therapeutic turn away. Therefore, these sources of anxiety, which do not appear indicatively, can only be deduced by decoding what the metaphors are trying to ignore.”

When we adapt these lines to today’s USA, where retired generals state “There may be a civil war in 2024”, where the economy is going down, where unemployment has increased and the health system has come to the brink of bankruptcy, with the country having the most deaths resulting from Covid-19, and where the sense of social justice and trust are lost, then we notice clearly that  “Don’t Look Up”‘ is not only saying not to look up the sky. The movie also says “Don’t look at the people above or those who govern!” In this picture, it can be clearly seen that being a Democrat critique of the Republicans pushes the limits and even exceeds it’s purpose, as in Hollywood’s relatively “progressive” movies, and Adam McKay uses a more radical approach instead of the usual liberal criticisms in this sense. However, It is also very clear that Dr. Randall Mindy’s has shaken the family institution because of his relationship with his seductive television programmer Brie Evantee (Cate Blanchett) is re-established at the end of the film, blessing the family and presenting the family as the last spiritual shelter when disaster strikes, is call to conservative feelings.

Just like in the Asghar Farhadi movie “Hero” that we watched on the same days, “Don’t Look Up” bombards the media and social media and shows that the “forced heroes” created by the media actually have no real equivalent, criticizing the US government system and individualism.

For trillions of dollars of rare earths!

In a scene of the Chinese movie “The Wandering Earth” (2019), which tells the story of Chinese scientists going on an space travel that will take 2500 years to find another solar system due to cooling of the sun and Jupiter approaching the our world, it is said ‘’look up and you will see your father!’’ That movie tells the story of billions of people fighting only for the survival of mankind without thinking of anything else, whereby a special emphasis is laid on the Chinese-Russian friendship.

Then it’s time to remember why the dollar billionaire, arrogant businessman Peter Isherwell (Mark Rylance) from “Don’t Look Up” wanted the comet to crash into the earth! A total of 140 trillion dollars worth of terbium, osmium, dysprosium, etc. elements is in the comet. He was saying that there were elements and that these elements, which started to run out in the world, were under “China’s giant panda claw”, and he was convincing the President of the USA that the collision would take place.

Have we arrived back to Jules Verne again, where we had started, recognizing that unconscienced science can be a catastrophic danger!