The Kazakh crossroads in Turkish-Russian relations 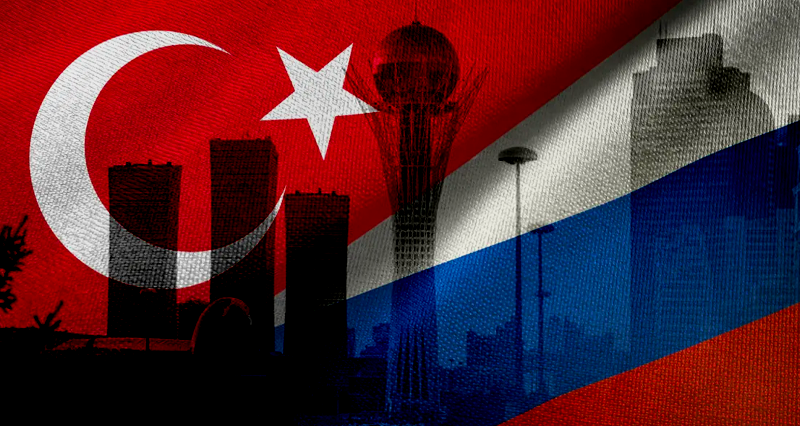 Turkish-Russian relations have managed to survive a great deal of strain put on by the recent insurrection in Kazakhstan. The plan to put Ankara and Moscow at odds with one another over Central Asia has failed.

Both Ankara and Moscow have close ties with Central Asia, especially Kazakhstan. While Turkey establishes these over cultural dynamics -common language and history -, Russia uses its relations developed within the context of the Union of Soviet Socialist Republics.

The two countries took a similar stance on the insurrection in Kazakhstan, albeit with slight differences. Here’s how:

Inspite of that, it is worth mentioning that the negative Turkish public opinion reacted negatively to the deployment of Armenian soldiers to Kazakhstan within the framework of the Collective Security Treaty Organization (CSTO).

The exclusion of the Organization of Turkic States (OTS), where Turkey is in a leading member, also drew criticism.

The best response to the Western-backed attempts to undermine the relations between Turkey and Russia over Kazakhstan would have been coordinated efforts of CSTO and OTS. Such an approach would have equaled the declaration of coordination among Eurasian countries to the world and increased mutual trust among the concerned countries.

Such steps to fortify the relations among Eurasian countries will be appropriate in the process lying ahead.

From competition to collaboration

It would actually be true to say that behind the aforementioned hesitations lie trust issues between Turkey and Russia inherited  from the times of the ‘Cold War’. For that reason, both countries still tend to consider many areas, including Central Asia, not as fields for cooperation but competition.

Yet, upon close examination, one can see both countries gain when they both cooperate. In concrete terms, there are five main areas under the Turkish-Russian sphere of influence:

Most recently, Ankara and Moscow pursued a similar foreign policy on resolving the conflict between Azerbaijan and Armenia, resulting in the partial resolution of a problem that has been haunting the region for a long time.

Stability in the Caucasus is in the mutual interests of Turkey and Russia. Praxis has shown that Turkish-Russian collaboration shows positive results on the field.

Ankara and Moscow took a common stance on the resolution of the Syrian crisis. Even though they were on the opposite sides of the negotiations, practical conflict-solving steps were taken within the Astana Process. We now see that the intensity of clashes is at its lowest thanks to this common initiative. Moreover, with the elimination of US-backed PKK/YPG/PYD in Northern Syria, and following that in Idlib, Syria and the region will fully and truly stabilize.

Even though Russia and Turkey have been siding with opposing forces in Libya after the murder of Gaddafi, present circumstances – the pressure put on by the USA and France – forces the two countries to cooperate. An agreed-upon candidate by Turkey and Russia in the upcoming Libyan elections may just be the push the country needs for restabilization. Following the example set in Libya, a Turkish-Russian cooperation in the rest of Africa shall yield positive results.

The crisis in Ukraine has a negative impact on Turkish-Russian relations. Ankara should pay special attention to Moscow’s sensibilities on Ukraine’s relations with NATO. Moscow, likewise, should act on concerns voiced by Ankara about Turkic people -Tatars and alike.

Accordingly, President Erdoğan’s offer for mediation between Russia and Ukraine is indeed valuable. Such an initiative shall prevent the infiltration by out-of-region forces into the area with the excuse of the crisis in Ukraine as well as aligning the government in Kyiv to a more acceptable line of tought.

As the Kazakh case demonstrated, Turkey and Russia’s common stance shall help prevent the Western-backed provocations in Central Asia.

Otherwise, it would be much easier to put the Turks and the Russians at odds against one another.

From a wider perspective, we can observe that over the issue of Kazakhstan;

It is possible to say, at this point, that these plans have failed due to a common stance by the two countries. But the risk of falling out still remains in a similar situation unless potential coordination in crisis management is not increased.

Finally, let us say that the ultimate solution against Western-backed provocations in our region can be found in the words of Zyuganov, the head of the Communist Party of the Russian Federation: “Long years of discontentment in Kazakhstan has flown into the demonstrations. An eerie alarm echoed through our country. Any politics that lead to inequality and poverty shall inevitably wear people’s patience thin (…) giving up on the socialist system as well as aggressive capitalism have led to an obvious inequality (…) Our peoples have become vulnerable, rather simultaneously, against external threats.”