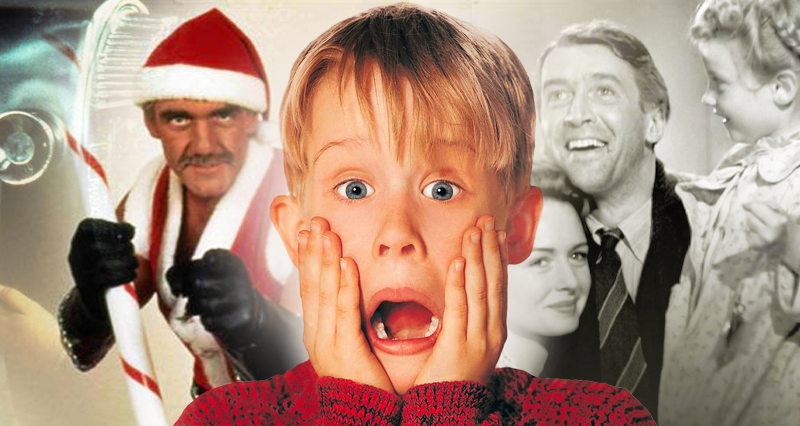 Art in general and the cinema in particular have always paid close attention to the concept of “New Year”, which during the history of humanity was celebrated at very different times, sometimes in March, sometimes even in August. Cineastes dedicated interest to preparations of Christmas, to celebrations of New Year, to the moments of the 31st of December, right before midnight, examining this special period of time sometimes as a main topic and sometimes as a detail. This period, which offers the element of “count down” and bears a very interesting, incomparable tension, was used to create a dark, mysterious background. Events then unfolded sometimes into the comedy, sometimes into hubbub, while sometimes sadness and pain prevailed in the movie.

Below are the Christmas and New Year movies that we have selected from the history of cinema:

Henry Edwards’ “Scrooge” (1935):  an old and parsimonious man, who treats everyone around badly, shows great expertise in “breaking hearts” gets a visit on Christmas night from three ghosts and changes.

Frank Capra’s “It’s a wonderful life” (1946): George Bailey has led a life he considers a failure from the beginning to the end, where none of his wishes comes true. In the movie, his life changes, but his desire to change his world by committing suicide on Christmas Eve is not permitted. There is “some above” that want to stop people from killing themselves unnecessarily.

Nora Ephron’s “Mixed Nuts” (1994): comes immediately into mind when speaking of suicide on Christmas night. This director of comedies tells in the American version of the French movie “Le Pere Noel une Ordure” the story of people working on the phone hotline for Emergency Suicide Help Calls. Another Ephron movie, “Sleepless in Seattle” (1993), focuses on the love that starts after the small child’s, whose mother had died, Christmas wish comes true.

“Home Alone” (1990): restarted the fashion of mischievous boy in the cinema. The movie presents us adventures that would not have taken place if the parents travelling to Paris had not forgotten their child, “worth an army”, at home. The movie’s third part presents the adventures of the child condemned to stay home due to chicken pox.

Caroline Link’s “Jenseits der Stille” (1996): A Christmas gift leads to great changes. Lara has been watching since her childhood over her deaf parents. Her aunt gifts her a clarinet for Christmas, and the magic of an entirely different world captures Lara.

Count down on Christmas

Kathryn Bigelow, “Strange Days” (1995): The movie takes the audience to Los Angeles, a city that in midst of violence and chaos prepares to celebrate the millennium. The date is December 30th, 1999, and the digitalized underground world faces the emergence of a completely new, illegal entertainment form.

Claude Miller’s “Garde a Vue” (1981), tells the story between a police officer and a suspect that endures on New Year’s night till the morning. Clint Eastwood’s movie “Midnight in the Garden of God and Evil” (1997) explores how a journalist, who is sent to report on an elite New Year party, tries to solve the murder of a homosexual. John Amiel narrates in “Entrapment” (1988) a great heist that is planned to take place exactly at midnight. All these movies deal with the topic from a crime-action angle. “The Thin Man” (1934) of W. S. van Dyke shall of course not be forgotten; the movie full of humor and suspense tells the story how a New York detective tries to solve a very interesting murder with the help of his wife and dog during Christmas days.

And the famous “Die Hard” (1988): The first movie of the series end with a driver pointing to Bruce Willis and saying: “If this guy celebrates Christmas like that, I don’t want to know what he does on New Year!” The second part takes again place during Christmas. Our hero John McClane looks forward to celebrate the New Year with his wife Holly. It is a silent and snowy night. And McClane celebrates Christmas again – by killing exactly 264 people!

“I’ll be Seeing You” (1944), directed by William Dieterle, is a good study of the relation between Christmas and prison. A convicted woman is released for some days on Christmas on permission and meets a soldier who has witnessed the devastation of war and who receives psychological treatment.

Henry Selick’s “The Night before Christmas” (1993), tells the story of a pumpkin that sets out to discover the land of Christmas and kidnaps Santa Claus, intending to take his place. Another attempt of replacing Santa Claus is told by John Pasquin in “Santa Claus” (1994). Santa Claus falls from the roof and dies. The house owner takes his place and begins to go through an interesting adventure. Les Mayfield’s “Miracle on 34th Street” (1994) also tells the story how a little girl discovers Christmas miracles. A friendly man in a shopping mall tells he is the true Santa Claus, but 6-year-old Susan has her doubts.

John Huston tells in “The Dead” (1987) how two old women in he beginning of the 20th century organize a Christmas party in Dublin, inviting their friends and relatives. In “La Buche” (1999), directed by Danielle Thompson, Sabine Azema, Emmanuell Beart and Charlotte Gainsbourg play three different sisters with different characters that gather for a Christmas party. The party becomes an occasion for the unveiling of different secrets.

Sandrine Veysset’s movie “Y’aura t’il de la neige a Noel?” (1996) presents the life of an unmarried mother that has 7 children. Movie shows Christmas as a beacon of hope and identifies it with mother’s love as “a beautiful art” that shines a bright light.

Arnold Schwarzenegger plays in Brian Levant’s “Jingle All The Way” (1996) a helpless father, who does not dedicate the necessary time to his wife and son and even forgets to buy his son the much wanted gift on Christmas. The helpless father runs back and forth the last day in search of a solution. “Christmas Connecticut” (1992), directed by Schwarzenegger himself, carries the audience into an interesting New Year atmosphere within the Christmas shopping. And we are again in a shopping mall: “Falling Love” (1984). Ulu Grosbard tells how a man and woman meet during Christmas shopping and fall in a “forbidden love”, because they are both married. Another shopping story comes from John Guillermin in “The Crowded Day” (1954) that tells the stress 5 shop assistants go through facing the Christmas crowds.

John Frankenheimer’s “Reindeer Games” (2000) completely evolves around jokes on Christmas and Santa Claus. The gang of bandits dresses up as Santa Claus and names itself “Santa Claus’ Dwarfs”. Among them they make jokes of the kind “I wished you’d find a chimney to fall into.” Reading news that sales go up during Christmas, they propose the U.S. should double Christmas days and celebrations.

Michael Curtiz’ “White Christmas” (1954); Federico Fellini’s “Ginger and Fred” (1986), telling the story of two dancers who meet after 30 years again for a TV entertainment show; the Hungarian director Ildiko Enyedi’s “My 20th Century” (1988), which follows the story of two long separated sisters that ends up in the Orient Express in the New Year’s night of 1899 are further important cineaste works on the matter.

The wealthy man of the town loses consciousness due to an unlucky accident. Right at that moment, another man appears in front of him and convinces him of being Santa Claus himself. And the town anyhow passes through days where everybody is in need of Santa Claus’ help. Well, Hulk Hogan does his best in “Santa with Muscles” (1996).

Further cineaste Christmas decorations worth mentioning are “Santa Who?” starring Leslie Nielsen, that tells the story of events unfolding after a TV reporter who does not believe in Santa Claus’s existence meets a man who claims to be Santa Claus himself; “Grinch” (2000) starring Jim Carrey and presenting a story on the background of a pretty interesting and phantastic Christmas.

New Christmas and New Year movies are coming out without stop. Among the most recent movies on the matter are noteworthy: the “Christmas Chronicles” (2018) tells the story of two brothers the jump on Santa Claus’ sleigh and depart on an extraordinary journey; “Noelle” (2019) where Santa Claus decides to retire and is daughter is forced to pick up the job; “Last Christmas” (2019), with the story of a young woman that works in a Christmas shop in London and that has not had much luck with her life decision until then but departs on a new love. These movies are adding up to the joy of Christmas.

And then, there are the extraordinary Christmas movies, which do not display a very lovely Santa Claus, to say the least. Let’s remember the opening scene in Elya Suleyman’s “Yadon Ilaheyya” (2002): A group of Palestinian youngsters is chasing Santa Claus on the hills of Nasira. Santa is trying to escape, while he has bag full of gifts on his back, where all the time items keep on falling out. At the end, Santa Claus is cornered. He slowly turns towards the camera.. And we see a knife right through his heart!

And then there is the “Silent Night, Deadly Night” that presents to the audience a coldblooded, psychopath killer dressed up as Santa Claus and spreading death around. With my wishes of a happy, healthy and peaceful 2022 for our readers…