“US making calculating move in dangerous game of Ukraine crisis” 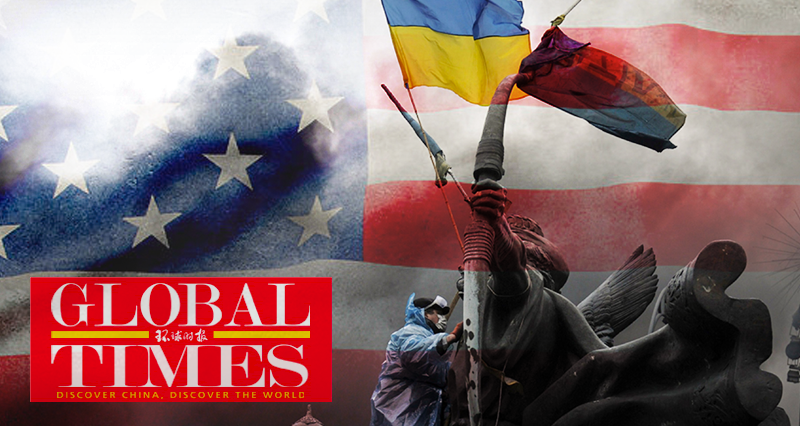 The tensions between the U.S. and Russia over the Ukraine are rising. Western approaches to enlarge the NATO alliance towards eastern Europe are continuing, strongly opposed by Russia.

While the Presidents of both countries are holding talks on phone over the crisis, the influential Chinese newspaper Glovbal Times published an editorial. The article reflects the Chinese view on the Ukraine crisis in particular and US and Western policy towards East Europe in general.

UWI presents below the article as published by Global Times on December 28.

US Vice President Kamala Harris said on Sunday that in the face of the current situation on the Ukrainian border, the US will work with its allies and prepare to “issue sanctions like you’ve not seen before.” The US and Russia have already blamed each other for the situation in Ukraine. The US claimed that Russia’s military exercises near Ukraine’s borders could be a prelude to an “invasion” of Ukraine, while Russia said it has the right to move troops on its own territory and demanded a pledge that NATO would not deploy its forces into Ukraine.

The US and Europe have been confronting Russia over Ukraine for some time. US intelligence claimed that Russia could “invade Ukraine” as soon as early 2022, while Russian President Vladimir Putin accused NATO of planning to deploy missile systems in Ukraine that could strike Moscow within minutes. Now, the clash between the two sides is getting even fiercer. Public opinion generally thinks that war is unlikely to break out between the US and Russia now. Mired in issues such as the COVID-19 epidemic, inflation and the upcoming midterm elections, and Washington withdrew its troops from Afghanistan despite all the difficulties, now it has neither the will nor the energy to get involved in another war.

But the US is continuously escalating tensions in Eastern Ukraine. Since the beginning of this year, the US has sent strategic bombers, including B-52s and B-1Bs to approach areas such as Black Sea. In November, the US sent strategic bombers and conducted simulated nuclear strikes against Russia, and entered airspace 20 kilometers away from Russian border, in an obviously provocative move. In addition, Washington released information such as it would impose economic sanctions on Russia and deploy more troops in Eastern Europe to pile on maximum pressure. It is like throwing matches onto dry firewood from time to time, but avoiding the flames deliberately. To the US, the more tense the Ukraine situation becomes, the more European countries will depend on the US. Setting up a common enemy among NATO is conducive to uniting allies. Washington is the biggest beneficiary of this dangerous game.

And the biggest loser will be Ukraine, a country that has been in turmoil and division. Washington has painted its geopolitical competition between great powers with a thick layer of ideology. It has tried to portray what is happening on the Russian-Ukrainian border as a tragic story about “aggression” and “counter-aggression,” as well as making Ukraine a pawn on the European chessboard as it pushes eastward. Since the disintegration of the Soviet Union, many countries, including Ukraine, have experienced “color revolutions” supported by the US. But most of these countries ended up in tragedy, as the US has neither the will nor the ability to provide them with substantial assistance. The US has been providing huge military aid to Ukraine over the years, weaponizing it from top to toe. However, it has explicitly excluded any possibility of fighting for Ukraine. Washington’s policy of creating crises is likely to turn Ukraine into a regional powder keg.

The US is unreliable. This is true when it comes to not only Ukraine, but also Russia. The essence of the issue is not that Washington is “seeking justice” for Ukraine or Europe, but that it is using NATO as a tool to cannibalize and squeeze Russia’s strategic space. Since the end of the Cold War, Russia had also tried to win acceptance from the US and the West through making political changes. But what it gained is the US’ abandonment of its promise that NATO would not expand eastward if a reunified Germany remained in the bloc. The US has led NATO to engage in five rounds of eastward expansion over the past more than two decades. Moscow sees Ukraine as a red line for security. But now even Ukraine is said to be absorbed into NATO. Russian President Vladmir Putin on December 23 accused NATO of cheating Russia at his annual press conference.

To secure its advantageous position by creating disputes, divisions, conflicts and confrontations is what Washington has always pursued in international affairs. Be it deploying missiles on Russia’s doorstep, conducting “close-in reconnaissance” on China’s coastal areas, or sending warships to sail through the Taiwan Straits, all these actions were taken by Washington to test its two biggest “rivals” and the US is waiting and looking for opportunities to drive a wedge. The US may not plan to start a war with Russia or China, but it hopes to maintain a certain degree of tension and chaos in the surrounding areas of the two opponents. As such, it has kept propagating the “China threat theory” and “Russia threat theory” and at the same time tries to rally allies to exert pressure together in an attempt to force Russia and China to retreat from their core interests.

What is happening in Eastern Europe today has taught the Chinese people a good lesson. That is, the US has never changed its foreign policy of profiting from regional tensions. China won’t bend to US pressure in exchange for an environment of peaceful development. China must unswervingly move forward based on our own pace and during this process, change the US intention to pressure China from a position of strength. This is the most important rule for China as a major power to get along with the US.