UWI Webinar on Libya and the Mediterranean: Issues of domestic and regional dialogue 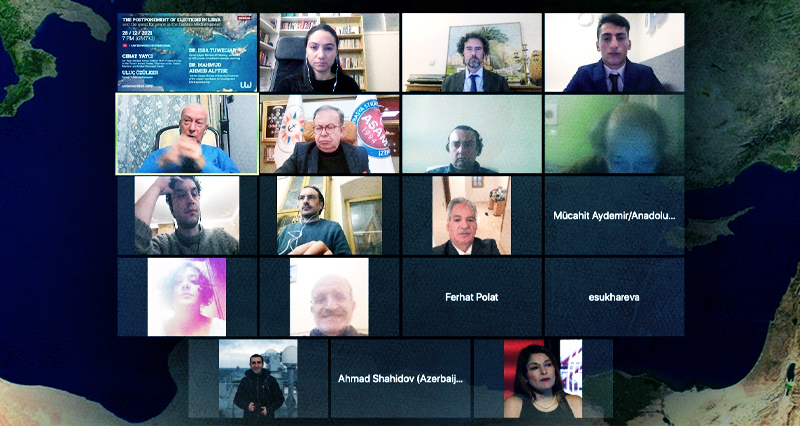 United World International has organized a webinar titled “The postponement of elections in Libya and the quest for peace in the Eastern Mediterranean” on December 28.

On the Turkish side, Uluç Özülker, retired ambassador, who also served in Tripoli between 1993 and 1995 as well as ret. Rear-Admiral Dr. Cihat Yaycı, former Chief of Staff of the Turkish Naval Forces and currently Chairman of the Turkish Maritime and Global Strategies Center made presentations.

The webinar was attended by several international journalists and aired on YouTube. It can be watched here:

Dr. Issa: “We are seeking long-term strategic alliance with Turkey”

Dr. Issa held the first presentation in the webinar. He said, “Many countries including the U.S. have made the mistake of supporting Haftar to come to Tripoli. But with the help of Turkey and with our decided stance that we will never go back to dictatorship, we were able to stop and defeat Haftar and send him back”.  He continued with reference to the current elections and stated the following:

“But the country remained divided into East and West. And no matter what kind of agreement you make with Haftar, he always defies these agreements, because he insists in controlling Libya as a dictator.

His candidacy for the elections was also only a cover up. These would have been the last elections before he establishes his dictatorship. What happened in the elections? The parliament has produced flawed laws tailored for the victory of Haftar. He was planning to falsify the elections and afterwards install himself as a dictator.

But the candidacy of others, such as Saif al-Islam Gaddafi and Abdul Hamid Dbeibeh surprised him. So he became aware that he was not going to win the elections, and he moved forward to postpone them.

“The struggle is between democracy and dictatorship”

For Dr. Issa, the main struggle in Libya is between democracy and dictatorship. He stated:

Retired Turkish ambassador Özülker, who also served in Tripoli, summarized the problematic in Libya in three points: “Firstly, the French President of the time, Nicolas Sarkozy has played an important in role in the emergence of the Libyan conflict in 2011. And France is choosing today still the wrong side by supporting Haftar. Secondly, Haftar is a person educated and prepared by the CIA, he is a member of the U.S. intelligence. The Americans’ embargo has had a devastating effect on Libya. The US’ Arab Spring, part of the Greater Middle East Project, has turned quickly into an Arab Winter. Thirdly, the United Nations have not succeeded in solving the Libya conflict, and it is not helping at all to find a solution.”

Özülker emphasized that a solution for the conflict can only emerge from within Libya: “There is not other option but to sit together at the table and pursue a dialogue. Only domestic compromise will solve the problems.”

The retired ambassador also pointed out the importance of Turkish-Russian cooperation, proposing that joint action can be taken in Syria’s Idlib. He also emphasized the success of the Astana Process and the recent cooperation in the South Caucasus.

While the Libyan speakers were criticizing Russia due to Wagner’s activities, Özülker stated that the diplomacy between Ankara and Moscow has led Wagner to stop its activities against Tripoli entirely.

“The dialogue we have with Russia would help us to go further away in the solving of problems of the region”, he has said.

Özülker also mentioned that the Black Sea and the Mediterranean have a common destiny, where the coastal countries must act together to protect peace and stability and avoid external interventions.

Özülker also said that Turkey had committed some mistakes in the policy towards Egypt, but that Ankara had entered recently the path to correct these mistakes.

The former Chief of Staff of Turkish Naval Forces, Dr. Yaycı described the Turkish influence in Libya’s history on military and politics and provided the example of Mustafa Kemal Atatürk. He agreed with Özülker on the United Nations’ negative role in the conflict, emphasizing that the elections would not provide correct results.

As Yaycı, all participants agreed that there were too many candidates in the elections. Yaycı agreed also with Dr. Issa concerning the election date: “The Libyans did not determine the election date in Libya. It was the Westerners who wanted have a new dictator elected for the country”, he said.

Dr. Yaycı, who recently visited Egypt on “a personal initiative and invitation”, where he met with representatives of think tanks, emphasized the Turkey and Egypt had a relationship far deeper than friendship. He explained the common roots of both countries and populations by historic examples.

Speaking of his recent visit to Egypt and his meetings there, Dr. Yaycı said the following: “When I explained to my counterparts that Egypt would gain 22 thousand km2 in case of an agreement with Turkey, they were very much surprised.”

Dr. Yaycı emphasized that the Turkish-Libyan Memorandum of Understanding on maritime border delimitation was in no way expansionist or Neo-Ottoman.

Dr. Yaycı also supported recent contacts between Ankara and political forces in the East of Libya. He proposed to develop these further by reopening the Turkish embassy in Benghazi, starting direct flights and beginning to offer visa services.

Dr. Mahmud: “Election date of December 24 was not chosen by Libyans but by superpowers that want to have a dictator elected”

The former Libyan Minister of Industry, Dr. Mahmud concluded the presentations. He stated:

“The Libyans did not choose the election date of December 24, others decided upon it. Some superpowers, like the United States and France would have liked to see a new dictator on that day in Libya, because they don’t care about Libya. What they care about here are three things: terrorism, legal migration and energy and location. But they don’t think about democracy in Libya.

In 2011, the French President Nicolas Sarkozy made a personal issue of animosity to Muammar Gaddafi and committed mistakes. And France still commits mistakes by supporting Haftar and creating problems.

The only power on our side is Turkey, this is why we are seeking to establish a plan for long-lasting relations with Turkey.”

Dr. Mahmud commented on the recent visit of an Eastern Libyan delegation to Ankara the following:

“The recent visit of a delegation from the Eastern House of Representatives to Turkey was positive, even though we have to read between the lines because the Eastern side is still controlled by external powers, such as Egypt and the Emirates.

Though, relations between Turkey and Egypt are also getting better, something that makes us happy, because if Turkey and Egypt become friends, that is also good for the Libyans. But we have to be careful, because Hafter is still hungry for power. Everybody knows he was a CIA agent.

We have seen in the Syria and Libyan conflict that Russia and Turkey have become, we cannot say allies, but very important countries, whose voice is listened to by other nations. This is because the politics between Mr. Erdoğan and Mr. Putin was successful in many areas.”