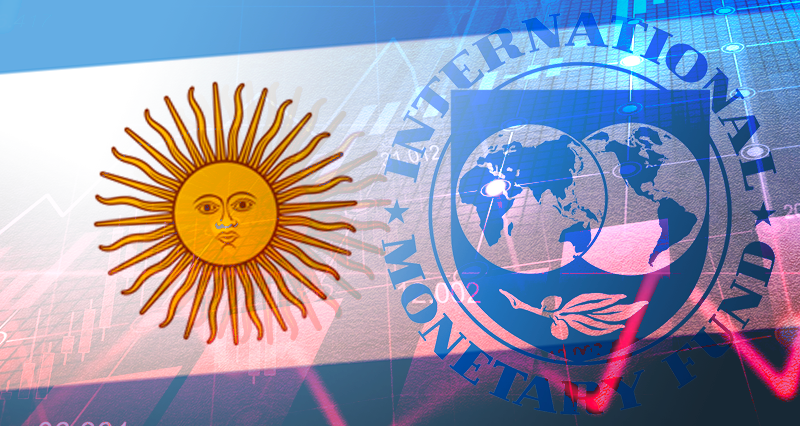 On June 20, 2018, when the International Monetary Fund (IMF) approved the largest loan in its history: $50 billion to the Argentine Republic, this South American country was governed by the right-wing Mauricio Macri (2015-2019), while the IMF was led by Christine Lagarde (2011-2019), today president of the European Central Bank.

It was already a huge amount. However, the IMF Executive Board considered just a couple of months later, in October 2018, that the confidence shown in the Argentine neoliberal government and in its ability to order the nation’s economy had not been enough. A vote was returned and a new increase to the so-called Stand-By Agreement was approved. The IMF and the Macri government were proud to have broken their own record: the amount then amounted to $57 billion.

It is worth remembering that this IMF Program, which only completed 4 of the 12 reviews planned by the Fund, without having achieved the primary objectives of restoring fiscal, monetary, and macroeconomic confidence (that is, without leveraging the growth of the real economy in Argentina), it was able, even in the face of this gloomy performance of the Program, to disburse $44 billion, that is, 77% of what was approved by the IMF’s Executive Board.

Fortunately, and as a result of the August 2019 presidential primary elections that showed Alberto Fernández as clear winner, the IMF program and disbursements stopped, and, on July 24, 2020, during Fernández’ presidency, the Agreement was officially canceled.

As is widely known, Argentina is now in the process of restructuring the debt contracted by the Macri government. The South American country has just made a new payment of $1,900 million for the second capital maturity with the Fund so far in 2021.

With the report that we will discuss below, finally the IMF officially recognizes that the Stand-By Agreement reached with Argentina in 2018 was the biggest failure in the history of the multilateral credit organization subordinated to the United States government, as the US is its majority shareholder partner. The role of Donald Trump (2017-2021), then a tenant of the White House, was decisive in such an economic disaster to occuring.

About the IMF Technical Report

This December 22, 2021, through a Press Release, the International Monetary Fund (IMF) released some of the conclusions of the last meeting of the IMF’s Executive Board regarding the Stand-By Agreement with Argentina. There, the following report was presented and discussed: The Ex Post Evaluation of Exceptional Access to Credit by Argentina in the framework of the Stand-By Agreement of 2018.

It should be noted that this type of special report is prepared by the IMF whenever a loan exceeds 400% of the quota that the recipient country maintains with the lender. In this particular case, Argentina closed an Agreement with the Fund in 2018 for $57 billion, equivalent to about 1,300% of its quota, of which it reached a disbursement for 1,100% of its quota ($44 billion).

The document (of 135 pages) maintains that “the Program aimed to restore confidence, reduce the balance of payments, fiscal imbalances and reduce inflation. The restoration of confidence, in turn, would give the authorities time to address the longer-term challenges facing the Argentine economy at the time”. Thus, the strategy focused on “fiscal and monetary tightening, combined with specific structural reforms to catalyze new capital inflows.”

In theory, the historic program approved for Argentina also included measures to “support the most vulnerable segments of the population and address gender inequality.” Something that never came to fruition either.

On the ‘correct’ conduct of the IMF

In this regard, the report states that “the pertinent policies and procedures of the Fund were complied with, including those related to financing, safeguards and program design.” However, “the program did not meet its objectives, despite significant changes in economic policies. Increased repayments, together with capital flight, put considerable pressure on the exchange rate. Despite the exchange rate interventions (…) the exchange rate continued to depreciate, increasing inflation and the value in pesos of the public debt, and weakening real income, especially of the poor”.

A less than robust program

The document argues that “ultimately, the program’s strategy proved too fragile for Argentina’s deep-seated structural challenges and political realities. The fundamental problem was the lack of confidence in fiscal and external sustainability. The weakness of public finances with rigid budgets and income sharing agreements, high dollarization, weak transmission of monetary policy, a small domestic financial sector and a narrow export base: they limited the economic policy options available in the short term”.

Learned lessons by the IMF

The press release states that: “The last lesson that the (IMF) authorities draw from the 2018 Stand-By Agreement with Argentina is the importance of adequately defining the concept of who has ownership of the Program.” For the Fund’s technicians, the IMF is not the ‘owner’ of the Program, but rather the ‘property’ belonged to the Macri government, since ‘the program was custom designed by (and for) the previous Administration.”

In something that could be likened to a self-criticism, the IMF claims “to have learned a lesson” from the agreement with Argentina, this is that it should have given a broader sense “to the ownership of the agreement” before being approved by the Fund. In other words, the IMF should have understood that the agreement would involve “Congress, civil society, unions, political parties and Argentine society in general”.

However, “it is clear” – says the Report – that the Macri government: “deliberately avoided a greater social commitment. In light of the relevance that the IMF’s own technical staff have attached to this issue, “ownership” should not be defined (from now on) strictly. The programs have long-term implications for societies”, concludes the official statement.

Statements of the Minister of Economy

In an interview given on December 22, the Minister of Economy, Martín Guzmán referred to the IMF report highlighting the importance of a “global review” of the “absurd loan that Juntos por el Cambio took” in 2018.

The loan “was not used for anything good, for anything that improves productive capacity, the ability to generate employment in Argentina. It was used to pay unsustainable debts to private creditors who had entered to make a speculative bet on Argentina in 2016, and it was used to finance the formation of external assets” or capital flight, said Guzmán.

Specifically, the Macri government allocated around $21 billion in a bailout for private creditors and around $24 billion to finance capital outflows from Argentina. Likewise, the Minister of Economy reported that: “the IMF says that the Macri government should have drawn up a debt restructuring proposal, just as Frente de Todos has done since 2020.”

The Fund’s evaluation considers that “there should have been capital controls to prevent leaving the country, so that what actually happened does not happen.” Guzmán affirmed that “the IMF recognizes that the Juntos por el Cambio loan failed, (…) what remained is the damage and the Frente de Todos is working to reverse the consequences of having taken an absurd loan, which will lead to at least one decade for Argentina to get out of this scenario”.

Finally, in the opinion of the Argentine Minister of Economy: “The IMF still needs to make a really deep evaluation: it is necessary that there be a serious evaluation that allows knowing whether or not the norms of the Statute of the International Monetary Fund were met, since it is assumed that an IMF loan should not be used to finance capital outflows, and it is very clear that this happened in Argentina”, reflected Guzmán.

On the other hand, on December 23, during a year-end toast at the Casa Rosada, headquarters of the Argentine Executive, President Alberto Fernández described the report released by the International Monetary Fund as “lapidary”: “The report, taking into account that the institution in charge does it, it was lapidary, but it is something that we already knew, we told the Fund about it and it had to admit it,” said the Argentine president.

It is important to note that “The Ex-Post Evaluation of Exceptional Access to Credit by Argentina in the framework of the Stand-By Agreement of 2018”, carried out by the International Monetary Fund (IMF), first of all is not an audit due to the action of the Fund, but rather – as explained at the beginning of this report – it is a “normal” procedure in the face of – in this case the exorbitant amount approved by the IMF.

On the other hand, the technical evaluation has very little or no “self-criticism” since the focus of the report is not centered on the IMF or its methods and procedures for granting or not granting loans of the size approved to Argentina, but rather it focuses mainly on the weaknesses and vulnerabilities of the Argentine economy. Ultimately, it blamed the administration of the Casa Rosada at that time.

In fact, the Fund only recognizes that “perhaps its only mistake” is not having understood that “the owner” of the loan was not the government (of Macri), but the State and Argentine society as a whole. This – clinging to the argument of the sovereignty and independence of each member country – would clearly exempt the IMF from accepting any responsibility for having approved a credit that is clearly unpayable.

Moreover, it is a great contradiction that having been “a tailor-made agreement”, prepared and devised exceptionally and exclusively for Argentina, it could have been “too fragile” or “not very robust”, and even so the IMF is not responsible for to have allowed the disbursement of $44 billion that went to bail out private creditors and capital flight. The Program not only failed, but also deepened the recession and the Argentine economic, social and political crisis.

However, it is true that this “half-heartedness” of the International Monetary Fund about the errors, weaknesses and defaults, or directly, about the failure of the historic loan granted Argentina, does manage to splatter Macrismo, but not as much the coalition Juntos por el Cambio, which no longer has Macri as its leader or main political reference.

Finally, it is clear – and it is fair to repeat it once again – that the economic program approved by the International Monetary Fund for Argentina in 2018 has failed. However, the public dissemination of this technical report has been well received in the political sphere of the Frente de Todos and in the related media. Well, without a doubt it is “good news” in a complex context that, among other things, in the face of the non-approval of the 2022 Budget in the Chamber of Deputies (something that has not happened in the 38 years that have elapsed since the return to democracy in Argentina), could complicate and bog down negotiations with the IMF.