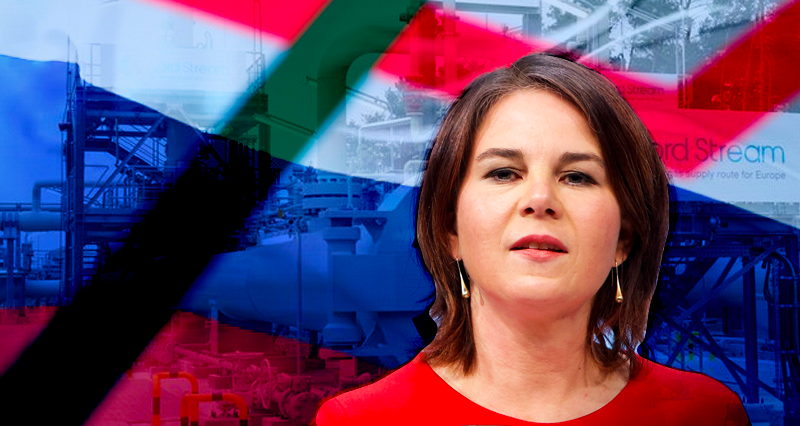 International politics is getting a new definition for an act of aggression: Not using a country a transit space for gas transfers and consequently not paying the according fees.

The newly elected Foreign Minister of Germany, Annalena Baerbock presented the argumentation in a recent interview to the German TV channel ZDF. Asked about the operation of the Nord Stream 2 pipeline, Baerbock stated the following:

“We have talked about this issue also in the negotiations leading to the coalition agreement. And we have written into the agreement that for energy projects, and these include Nord Stream 2, European energy law is valid. That means, according to the current situation, this pipeline cannot be approved as it is, because it does not fulfill the conditions of the European energy law. And matters of security remain unanswered too.

This has also been discussed between the former German government (headed by Merkel, YS) and the Americans, where it was agreed upon that in case of further escalations (in the Ukraine, YS), this pipeline may not become operational. I am consciously saying “may not”, I am using the conjunctive, because we are right now in the phase where we want do everything necessary to enable talks taking place again. Because talks are the best and most secure way to ensure that another escalation is avoided”. (Translation by Yunus Soner)

As it is very informative, that statement is worth being examined in detail.

First of all, the German Foreign Minister makes a clear statement:

It is the governing coalition of SPD (Social Democrats), the Greens and FDP (Liberal Democrats) that have decided and agreed upon to submit their government’s policy concerning Nord Stream 2 under the European energy law.

Here, the so-called Third Energy Package[i], the Directive of the European Union from 2009 enters into force as well as the amendment[ii] from 2019, regulating further “gas transmissions to and from third countries”.

In these, the European Unions demands the so-called “unbundling”, that is the separation of supplier of gas and operator of the pipeline; the opening up of the pipeline to other suppliers – pretty difficult as the Nord Stream connects only Russia and Germany, and other Russian companies may not be considered as “other suppliers” by the EU as they are also Russian; and the creations of a European Union registered subunit.

It is worth mentioning that the Third Energy Package aimed to establish “true market prices” and flexibility, thus politically interfering against long-term supply contracts. These measures played an important role in driving the EU into the current energy crisis, where a flexible market with spot-domination was established, but the US suppliers decided to deliver more gas to Asia as the prices were higher there.

Accordingly, Nord Stream 2 is literally drowning in a swap of judicial struggles, reaching from the validity of the 2019 Amendments for the project to the question whether European or German courts are entitled to decide.

On December 16, Reuters reported that “There will be no decisions in the first half (of 2022),” Bundesnetzagentur (BNetzA) President Jochen Homann said with regard to the certification process.

The Washington Post comments “the Germans have done what their bureaucracy does best: buy time with paperwork”.

But the German Foreign Minister immediately limits the validity of European law and German bureaucracy when she states:

“This has been talked about and agreed with the Americans”

The German Foreign Minister Baerbock refers to the “Joint Statement of the United States and Germany on Support for Ukraine, European Energy Security, and our Climate Goals”[iii], published on July 11, 2021.

In this statement, the US and Germany “recommit (themselves) to push back against Russian aggression and malign activities in Ukraine and beyond”.

That is a daring geopolitical enterprise on Washington’s side indeed. The Ukraine is estimated to gain yearly 2 billion US dollars as transit fees for gas, if extended for 10 years, that would constitute an income of 20 billion, which is vital for an economy that already is on the brink of collapse.

The US-German statement contradicts the very idea of Nord Stream 2, that is, to bypass geopolitically insecure territories, which through transit fees raise the final price.

The Ukraine has signed several bilateral defense agreements with Western countries and purchased important amount of arms and defense systems. If successful, this statement may even lead to Russian gas transfer fees financing Ukraine’s arms imports from the US. Pretty hard to imagine!

Another point is that this joint US-German statement was signed by the former Chancellor Angela Merkel, raising the (historical) question of how much Baerbock represents a change of policy.

For its immediate goal of securing transit fees and intermediate goal of “reducing European demand for Russian energy”, the statement also proposes to use European law including the certification process of Nord Stream 2, as well as it lays further duties on Germany to fund energy transition in the Ukraine.

If Moscow resists this irresistible offer to finance its neighbor, which 5 times a day threatens to break out a war with it, than…

“The pipeline may not become operational”

The German Foreign Minister insists on the conjunctive, that Nord Stream “may not” become operational, and states that “talks are the best way to avoid escalation”.

By that, she clearly defines “escalation”: It is Germany’s open threat to keep the pipeline closed, despite of rising gas prices and nearing winter.

Germany’s roads become icy and slippery in winter, and so is the path of this policy

A useful threat for the slippery path of Transatlantic policy

Something interesting happens in the meantime. It is the US and Western press that suddenly discovers a huge threat: Russia is about to invade the Ukraine! While Russian authorities again and again deny such a threat, the Western press hypes it up, publishes so-called invasion plans, calculates troop numbers, discusses whether and how long the Ukrainian army could resist and etc.

While the European population freezes because of exploding gas prices, it may warm itself during this transatlantic bargain with the idea of a sacrifice in favor of the freedom-loving people of the Ukraine!

Much of this propaganda is indeed needed in Europe, as the new German government’s policy is hotly disputed.

The TV moderator who interviews Baerbock asks whether “she will be able to convince” the SPD, the leading coalition partner.

The German business associations support the Nord Stream 2 pipeline, not least as it offers cheap energy while the prices are skyrocketing. (The US gas suppliers position is another interesting matter: having limited Russian deliveries to Europe, they themselves sell their gas to Asia which currently pays even higher prices, and behave “disciplined” by not raising production…)

Other European countries also mock up against this bargaining strategy. Austria has expressed its insistence on that the pipeline should start working as soon as possible.

And even further, the coalition agreement of the current German government itself recognizes the continuing need for gas, stating that “natural gas is indispensable for a transition period”.

Hence, even the provoking Economist gets to the conclusion that “the pipeline still seems likely to go ahead” – but the new pro-atlantic German government will fight some struggles against imagined foreign enemies and real domestic adversaries till that happens.

[iii] For the full text of the US-German statement, see: https://www.state.gov/joint-statement-of-the-united-states-and-germany-on-support-for-ukraine-european-energy-security-and-our-climate-goals/