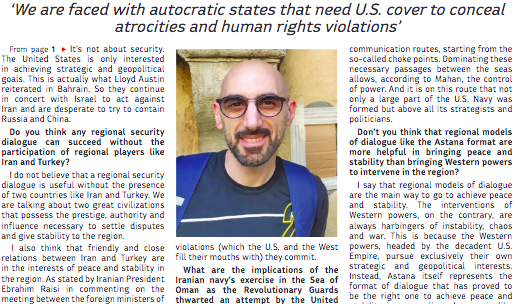 United World International expert Fabrizio Verde has given an interview to the Iranian newspaper Tehran Times, discussing regional issues and the position of imperialism.

The original interview can be read here.

UWI documents below the interview as published by Tehran Times.

The director of the online newspaper l’AntiDiplomatico says that regional models of dialogue are more effective.

“I say that regional models of dialogue are the main way to go to achieve peace and stability,” Fabrizio Verde tells the Tehran Times.

“The interventions of Western powers, on the contrary, are always harbingers of instability, chaos and war.”

Verde believes the Western powers, headed by the U.S., “pursue exclusively their own strategic and geopolitical interests.”

U.S. Secretary of Defense, Lloyd J. Austin, visited Bahrain on Friday to participate in the Manama Dialogue hosted by the International Institute for Strategic Studies (IISS).

The three-day conference brought military and political leaders from the GCC and other countries together to discuss issues relevant to the Persian Gulf region.

Q: U.S. Secretary of Defense Lloyd Austin said Saturday at the Manama Dialogue in Bahrain that “America’s commitment to security in the Middle East (West Asia) is strong and sure.” What does he mean when he says “security”?

A: As we know, the United States cares little about the security of the Middle East (West Asia). If they really cared about the security of the region, they would not have brought war and destabilization there.
It’s not about security. The United States is only interested in achieving strategic and geopolitical goals. This is actually what Lloyd Austin reiterated in Bahrain. So they continue in concert with Israel to act against Iran and are desperate to try to contain Russia and China.

Q: Do you think any regional security dialogue can succeed without the participation of regional players like Iran and Turkey?

A: I do not believe that a regional security dialogue is useful without the presence of two countries like Iran and Turkey. We are talking about two great civilizations that possess the prestige, authority and influence necessary to settle disputes and give stability to the region.

I also think that friendly and close relations between Iran and Turkey are in the interests of peace and stability in the region. As stated by Iranian President Ebrahim Raisi in commenting on the meeting between the foreign ministers of the two countries, regional cooperation between the two countries should be transformed into “international cooperation”, creating an interaction with effects on the entire international community.

Q: Why do autocratic states like Bahrain and Saudi Arabia persist on keeping the U.S. in West Asia?

A: The enemy of my enemy is my friend, says an Italian proverb. So I think they insist on keeping the United States in the Middle East (West Asia) to counter Iran. On the other hand, in order to go against Tehran, these two countries also have an axis with Israel.

Furthermore, as well stated in the question, we are faced with autocratic states that need U.S. cover to conceal the atrocities and human rights violations (which the U.S. and the West fill their mouths with) they commit.

Q: What are the implications of the Iranian navy’s exercise in the Sea of Oman as the Revolutionary Guards thwarted an attempt by the United States to protect a tanker that was stealing the Iranian oil?

A: The United States is now afraid. Perhaps for the first time, they have seen their supremacy over the seas affected. In Washington, they consider it fundamental because controlling the sea routes ensures the absolute monopoly of world trade, and therefore the ability to influence global politics. Already in the nineteenth century, Alfred Thayer Mahan, founder, and creator of the American sea power theory, had indicated a fundamental fact: the United States would become hegemonic on earth only if it controlled the maritime communication routes, starting from the so-called choke points. Dominating these necessary passages between the seas allows, according to Mahan, the control of power. And it is on this route that not only a large part of the U.S. Navy was formed but above all its strategists and politicians.

Q: Don’t you think that regional models of dialogue like the Astana format are more helpful in bringing peace and stability than bringing Western powers to intervene in the region?

A: I say that regional models of dialogue are the main way to go to achieve peace and stability. The interventions of Western powers, on the contrary, are always harbingers of instability, chaos, and war. This is because the Western powers, headed by the decadent U.S. Empire, pursue exclusively their own strategic and geopolitical interests. Instead, Astana itself represents the format of dialogue that has proved to be the right one to achieve peace and stability in a complicated scenario like the Syrian one. An important result also given imperialist maneuvers certainly not aimed at bringing peace and stabilization. However, the dialogue model seen in Astana showed how it is possible to find solutions even in complex scenarios where different visions and needs coexist. Being able to bring peace and stability where Westerners had intervened for their own strategic and geopolitical interests provides us with a further example of the change taking place, with the world entering the Eurasian-driven multipolar phase.