A glance at Egypt: Sisi’s secret role in Sudan’s coup, and how he forced Biden to negotiate 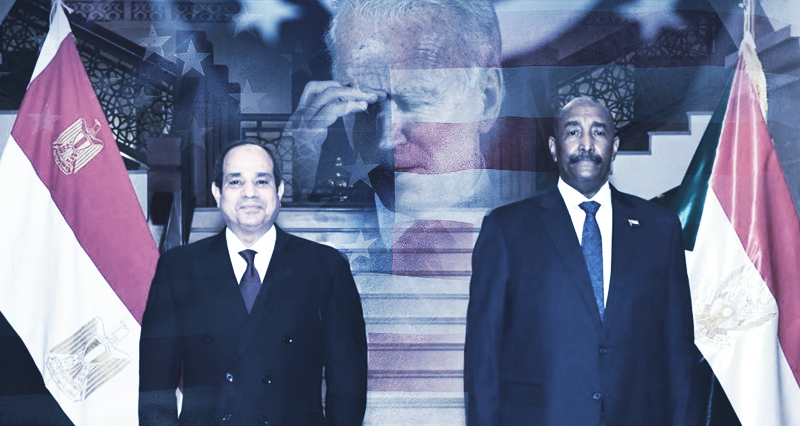 Did Sisi give the green light to Burhan’s coup in Sudan?

Sudan has experienced everything, from civil war to division into two states, to terrorism and being governed by a tyrant and war criminal for over 30 years. The country finally had the opportunity to experience democracy under a joint government between civilians and the military after the overthrow of the long-term president Omar Bashir in 2019.

In August 2019, army and civil powers reached an agreement to share governance through a presidential council that will see the army leaders presiding for three years, until the end of 2021, then civil powers will take over the country until the end of the transitional period and organize legitimate democratic elections.

Sudan was dreaming of a new era where some of the international sanctions imposed on the former government would be lifted by the western powers, and a loan from the World Bank was approved to help the country to overcome the economic deteriorated situation. Some western countries have agreed to write off some of its debts, thanks to the efforts of Prime Minister Abdalla Hamdok and the peace deal with Israel last year.

On October 25, days before handing the power to the civil powers, General Abdel Fattah al-Burhan, the military chief and chairman of Sudan’s transitional Sovereignty Council, overthrew PM Hamdok, putting him under house arrest and dissolving the government in an obvious coup d’état against the deal with civilians.

Burhan’s movement was met by wide disapproval in the west, calling on the military leader to return to the democratic track and allow civilians to take over power as agreed.

Regardless of Burhan’s motives, what makes him turn against his international commitments and betray his civilian partners?

Western media outlets have reported that Burhan wouldn’t dare attempting a coup without regional support, a claim that was backed by a Wall Street Journal report on November 4, saying that Burhan met President Abdel Fatah Al Sisi in Cairo a day ahead of the coup and, then meeting with US Envoy for the Horn of Africa Jeffery Feltman, who was taken by surprise hearing about the coup in Sudan which was staged by a man he was in the same room with hours ago.

During his meeting with Feltman, Burhan hinted at taking action against the civil government, but the Americans didn’t take him seriously.

Another claim was mentioned in the WSJ’s report is that Egypt’s Director of the General Intelligence, Abbas Kamel, flew to Khartoum to meet General Burhan, shunning PM Hamdok, where he decisively told Burhan that Hamdok “has to go” over his stance on Ethiopia regarding the Renaissance Dam.

Days after the coup, the Egyptian media – mostly affiliated with the government – stopped reporting the events taking place in Sudan, they even stopped describing them as a ‘coup’. One of the top ‘independent’ newspapers in Egypt “Almasry Alyoum” went on and described the military’s movement as an attempt to prevent an imminent civil war and restore stability in the country, blaming Hamdok for the unfortunate events by not obeying the military to dismiss some of his ministers and remain in power.

The newspaper quoted an unnamed Sudanese source saying that Hamdok refused to listen to the military generals warnings regarding the “dangers” of civil rule.

The official stance was no different; the Egyptian foreign ministry said in a short statement that it is closely following the recent developments in Sudan, calling upon all Sudanese parties, in the framework of responsibility and self restraint, to prioritize the country’s higher interests and national consensus.

The statement refrained from condemning the army’s movements in Sudan or describing the events as a coup in a way that may reveal the Egyptian affiliation in this conflict. And unlike the Egyptian foreign affairs traditional policy of “wait and see”, the statement was released a few hours after the military’s movement, short enough to make one think “it was already prepared.”

Moreover, Egypt refused to add its name to the joint statement from Saudi Arabia, UAE, USA and UK to condemn the coup in Sudan, marking a rare phenomenon where Egyptian foreign policy contradicts the GCC.

Egypt’s Foreign Minister Sameh Shoukry explained the Egyptian stance by saying his country stands at the same distance from all parties in the southern neighbor, allowing the Sudanese people decide their fate.

“Egypt does not intervene in other countries’ domestic affairs, not to be misunderstood,” Shoukry said on November 9, during a seminar at the Wilson Center in Washington, adding that his country respects the people’s will and will not take one component’s side against another.

“The success of Sudanese democracy would be a threat to the region’s dictatorships; an African country with a bloody history, an army that enjoys limitless power and international support represented in loans and aids, who would want a country like this to be an example for the region’s peoples?,” a political source, who preferred to remain anonymous, told United World International.

Burhan’s gambit makes more sense than conceding to a civil government; given the civil insistence to hand over the former tyrant Omar Bashir to the International Criminal Court in The Hague, where he will receive a just prosecution for his crimes in Darfur, a massacre that involved most of the faces ruling Sudan right now. Furthermore, the civilians are determined to investigate the human rights violations and the crimes committed against the protesters by the military following Bashir’s fall, and force the army’s rampant business to pay taxes.

Al-Burhan and his fellows may not want to rule solo, and we might believe that they want to hand over the power to a civil facade, as long as they guarantee a safe exit, but the question is, who would trust them now?

Egypt, US resume a 23-year-old tradition

After a six-year hiatus and for the first time under the Biden administration, Egypt and the US resumed their traditional strategic dialogue on November 8-9, marking a significant progress in the relations between the two historic allies.

The dialogue comes at a critical time, when Egypt is eager to restore its role as the US favorite ally in the region.

The points discussed during the two-day talks led by Egypt’s Foreign Minister Sameh Shoukry and his counterpart Antony Blinken in Washington were predictable to a large extent, and the agenda of both sides is obvious to everyone.

Egypt wanted to assure its partnership with the US and guarantee US support regarding its dispute with Ethiopia over the Grand Ethiopian Renaissance Dam (GERD) that will leave Egypt and Sudan in a critical situation if the third filling takes place next year, to which Blinken reiterated Biden’s support for Egypt’s water security. Also, Egypt wants to ensure the continuity of the US annual aids ($1.3 billion) after withholding $130 million out of the $300 million in US military aid upon human rights concerns.

Unlike the former administration of Donald Trump, the human rights conditions are a point of concern for Biden’s administration, which conditioned its support to Sisi’s government by making significant progress on this front.

“Making tangible and lasting improvements on human rights is also essential to strengthening our bilateral relationship and the United States will continue to support those efforts however we can,” Blinken said.

Cairo prepared for the dialogue months ahead by taking several steps that would enhance its stance during the talks. It announced what it called a National Strategy for Human Rights in September, during which it vowed to improve the human rights conditions. It also released some political prisoners and activists and lifted the state of emergency that Egyptians have been subjected to since 2017, and finally, acquitted some of the NGO founders who face terrorism accusations. However, the US still sees these measures as not enough under the Egyptian pre-trial law that originally targets the political activists and Sisi’s opponents, which has kept them behind  bars up to two years without a trial or specific charges.

Cairo has played it smart to force the Biden administration to negotiate with Sisi’s regime eventually; the country has proved itself as an irreplaceable player in several issues in the region, including Libya, Lebanon, Sudan, GCC, and of course, Israel.

Over the past year, Cairo has collected several cards in its portfolio, one of them is the vital role it plays in brokering the long-term truce between Tel Aviv and Gaza and sponsoring the talks between the Palestinian factions to get ready for the long-awaited presidential election that has been postponed indefinitely.

In the recent crisis in Sudan, Egypt also appeared as a genuine player in the southern neighbor, especially after the news floated about a secret visit by the head of the transitional council in Sudan, General Abdel Fattah al-Burhan to Cairo, hours before the coup he orchestrated on October 25.

In Libya, the US still needs Egypt’s mediation in the upcoming presidential elections to ensure stability in the war-torn country. Meanwhile, Cairo may prevent Lebanon from drowning in darkness by providing the levant country with electricity over the next three years.

Perhaps Sisi is not Biden’s favorite leader in the region, and we may not see the two leaders in one picture in the foreseeable future. But almost a year in office has convinced Biden that he cannot deny the necessity of communicating with Egypt anymore. However, he still expects further steps from the regime in Cairo to improve their image in front of the US institutions, if Cairo seeks Biden’s support.