Polish Border Crisis: the Beginning of the New Crimean War? 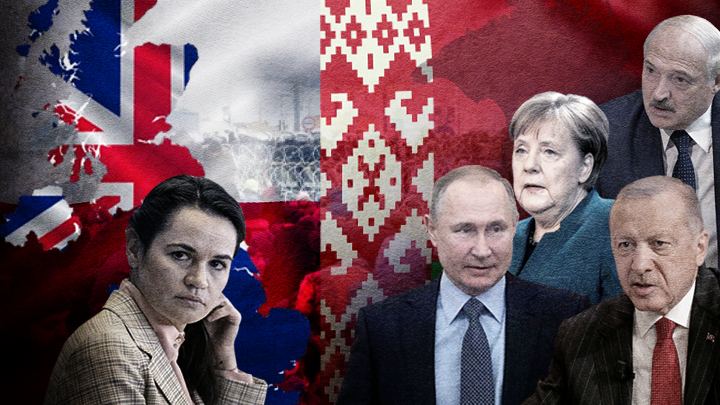 The Second World War broke out because of the unsolvable contradictions in the global capitalist system, for the sake of the interests of the dominant classes. In this sense, the war was inevitable as a part of the capitalist system’s evolution towards the globalist domination of the financiers. This does not mean, however, that we cannot separate events being the catalysts for the entire process, and that we do not know the mechanisms and tools that the perpetrators used to cause the conflict. At this level of analysis, it is easy to state the obvious: World War II was caused by the Great Britain granting Poland so-called defence guarantees. As a result, there was German aggression and a whole known sequence of events leading to the world as we know it today. Today, the UK is on the front line again – and again encourages Poles to make the first shot on our territory.

There is no border conflict between Poland and Belarus

In fact, there is no border conflict between Poland and Belarus, because several thousand immigrants in transit are not a real problem for any of these countries. Four, five or seven thousand newcomers regularly pass the Polish-Ukrainian border crossings on their way further to the West, mainly to Germany.

The problem is not the so-called “refugees” themselves, but the Western efforts to overthrow the Belarusian authorities, so far carried out with the help and from the territory of Poland. After all, Polish border blockades were originally designed to make life difficult for Belarusians, not Kurds and Syrians. And the temporary accumulation of newcomers at the crossings and the aggressive-hysterical reaction of the Polish authorities were only realisation of scenarios written elsewhere. And although the winner of all the confusion was, of course, Alexander Lukashenka – at the same time, the internal game between the Western countries remains unresolved. As part of it, Great Britain is fighting Germany again. And, of course, again using the Poles…

Time for the Belarusian-Russian-Turkish Pact

The border confrontation between Poland and Belarus is caused by three main factors. First – it was the Polish mercenaries of the West who were responsible for the unsuccessful Belarusian coup in August 2020. As we remember, despite spending millions of dollars, it was not possible to repeat the Ukrainian variant. The Minsk Maidan was embarrassingly weak and fictitious. However, the money was taken and the service remained unperformed.  The Polish side therefore feels obliged to maintain the tension in relations with Belarus, finances the operetta “Belarusian president in exile” Sviatlana Tsikhanouskaya on its territory, and consistently refuses to even notice that Alexander Lukashenka remains the real factor of power in Belarus. This begged for a Belarusian reaction, and it also happened in the form of not hindering the transfer via Belarus to groups interested in reaching Germany.

Secondly, the European immigrant economy is led primarily by Germany as the last and largest industrial labour market. Berlin says: “Let themin” – and the Southern wave arises. When there is an election in the Federal Republic, immigrants stab someone with knives, the Americans will blow something up and accuse the “Islamists” – then the gate is closed for a moment. Poland, as in any other economic issue, is only a German subcontractor, hence a binding agreement on immigrants was concluded by Angela Merkel and Alexander Lukashenko, completely ignoring the position of Warsaw. And the Polish government may complain internally, but still knows that must follow this German-Belarusian pact.

And finally, the third point. It is true that Germany rules the European, and therefore the Polish economy, but the Anglo-Saxon influence on the continent is still strong. And in this case, it is the United Kingdom that represents the interests of the groups known in the US as the “War Hawks”. When their influence in the United States weakens, as it was temporarily in the times of Donald Trump – then the British take over the course. And they remain active even when Uncle Sam’s attention shifts once more across Asia and the Pacific. This is how the presence of British troops, special and offensive forces in Poland and Ukraine – should be understood. The Brits want a new Crimean War – putting pressure not only on Poland and Belarus, but also indirectly on Russia, Germany and … Turkey, from where and through which the main immigration flows pass.

And as in the historical Crimean war – the only chance to prevent it would be close Belarusian-Russian-Turkish cooperation. The best – with the participation of Poland, which in fact is not a part of the immigration problem at all. Nobody wants to go to Poland, a country without a job nor a social policy. In turn, the Germans may pretend that they do not want to, but they are looking for new payers of pension contributions for all those who have not been hit with COVID yet. Only the Americans and the English can make money from the conflict (as always). And it is they who are behind the border crisis.