Glasgow and ‘Green Transformation’ in the eyes of China 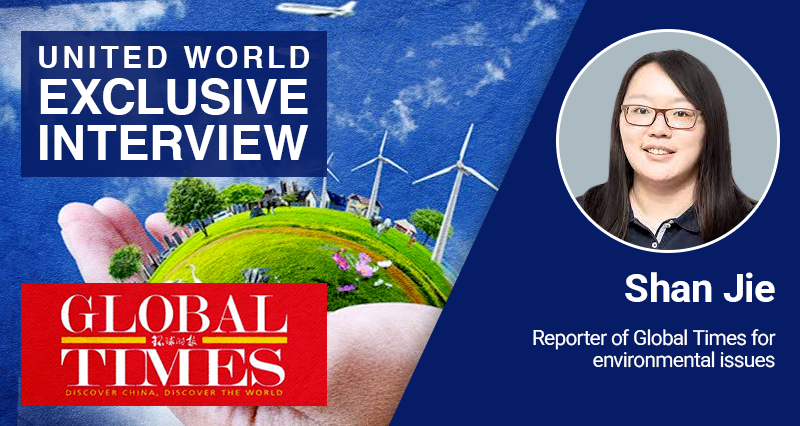 The agreement signed as a result of the United Nations (UN) Climate Change Conference (COP26), which was recently held in Glasgow, Scotland, was found insufficient to reduce global warming and its effects. World leaders have agreed on a weak climate deal, under the effect of the fossil fuel lobbies, which is not even close to preventing a temperature rise of 1.5C.

In addition, according to observers, the final declaration signed at the end of the discussions failed to meet targets such as eliminating the threat of global warming and providing financial aid to countries affected by environmental events caused by climate change. The European Union (EU) and the United States have refused to create a fund that the poorest countries can take advantage of for their losses and damages from the climate crisis. This decision of the EU and the US, which has the historical responsibility for emissions, caused reactions from countries with high climate vulnerability.

On the other hand, Western leaders criticized that Chinese President Xi Jinping did not attend the conference due to Covid-19.

We asked Shan Jie, Global Times reporter, who has been following China’s actions on the topic climate change for years, about Beijing’s assessment of the COP26 Summit and the concrete steps it will take in the climate crisis.

According to the experts, the United Nations Climate Change Conference (COP26) has not achieved the expected results so far. The final declaration of the Summit is also described as a ‘disappointment’. Environmental organizations criticize the declaration, which did not include a concrete decision on the future of fossil fuels. How do you evaluate the results of the Summit?

The COP26 in Glasgow, Scotland has been concluded, reaching some achievements such as the agreement on core issues regarding the Paris Agreement’s implementation rules. A new global climate governance journey has been launched.

While it should be understood that the long term goals set by the Paris Agreement require developed countries to set an example in reducing emissions, it is also the key to achieving a global net zero emission target as soon as possible. Also, countries need to take strong concrete actions rather than brandishing empty slogans.

As one of the biggest developing countries, China’s stance drew great attention during the COP26. During the conference, the Chinese delegation played an active and constructive role in negotiations and consultations on various topics and with different parties.

What concrete plans does China have to keep the temperature increase below 1.5°C?

On November 10, China and the US released the Joint Glasgow Declaration on Enhancing Climate Action in the 2020s, further putting forward specific measures for China and the US to carry out their respective domestic responsibilities, promote bilateral cooperation and advance multilateral processes. The document increased global confidence in carbon reduction and declared plans and solutions on some of the most pressing issues, such as reducing methane and CO2 emissions.

Moreover, China has been firmly advocating for the application of common but differentiated responsibilities, urging developed countries to further fulfill their commitments and increase support to the developing countries on climate issues.

China is a developing country that has been active in global climate management and its effort in many aspects should not be neglected.

In September 2020, China announced its goal to hit its carbon peak before 2030 and reach carbon neutrality before 2060. It means China will take the shortest time in history to complete the largest reduction in global carbon emission.

In order to achieve the goals, China has continued to take solid and active steps in confronting climate change, such as enhancing INDC, insisting on green development, optimizing energy infrastructure, building a carbon market, investing in scientific innovation, creation of laws, and enlarging public participation

The role of developed countries: ‘polluting, managing, transferring the pollution to other regions’

The debate continues on the applicable restrictions between China and major industrial countries such as the US, England, and Germany. These countries say that China is the largest producer, so its share in pollution is also large. How do you evaluate this allegation? Is it possible to develop binding and compelling common norms on climate? Or should there be a classification by responsibility?

Despite the significant progress that I mentioned, accusations by some developed countries against China and other developing countries in terms of greenhouse gas emissions still remain. After enjoying the benefits of development at the cost of polluting the environment for decades, these countries have now started blaming others for “emitting too much greenhouse gases.”

The data released by the World Bank in March shows that per-capita carbon emissions of China were 6.4 metric tons per citizen, 15th in the world, much lower than major developed countries including the US (17.6), Canada (15.7), Australia (14.9), and South Korea (13.3). In 2018, the average CO2 emissions of high-income countries and regions were 10.3 metric tons per capita, while China’s was 7.4. The per capita historical cumulative carbon emissions are only one-eighth of the United States.

Looking back at the last half century, developed countries led by the US contributed the overwhelming bulk of emissions in their industrialization. World Bank statistics show that the US’ CO2 emissions remained at more than 18 metric tons per capita between 1966 and 2008, with a high of 22.5 in 1973.

China is a country with a population of 1.4 billion and is still in its process of industrialization. Like other developing countries, it needs to develop and improve its people’s livelihoods while facing great challenges in energy security and tackling pollution.

It should also be noted that China is also the “world’s factory.” While exporting products to the world, it also bears the brunt of carbon emissions on behalf of other countries. Just look around your home to see how many products are “made in China.” While using these products in daily life, you are also contributing to the carbon emission in China. Developed countries have been “polluting, managing, and then transferring the pollution to other regions.”

Meanwhile, Western politicians continue to busy themselves peddling this narrative in an attempt to shift the responsibility of climate change, turning a blind eye to the fact that developed countries, even today, are the main culprits of CO2 emissions, let alone the $100 billion in annual funds that the developed countries had promised to channel to developing countries to confront climate change that they have not yet fulfilled.

As Xie Zhenhua, China Special Envoy for Climate Change, noted during the COP26, “China has never been opposed to the 1.5 C goal, as the Paris Agreement contains it. How could they say China is against it?”

He noted that seeking to achieve the 1.5 C goal is “realistic and practical”. This goal has been mentioned in several key documents between China and the US or with the EU on climate change. This goal and statement are the common consensus of different parties.

‘The Green Belt and Road Initiative’

How will the ‘green transformation’ that big companies are trying to lead affect the new global competition?

In terms of green development, China has been making efforts in working with other countries, especially developing countries in this area.

China had signed an MOU on climate change with 35 developing countries by 2020. More than 200 climate and environment study projects had been held by 2020 along with the training of 5,000 personnel. The Green Belt and Road Initiative is a leading practice of global climate governance.

China’s big companies also play a significant role in promoting and practicing said cooperation. They are also using innovative means to participate in this global battle against climate change.

The Three Gorges Corp, which runs the world’s largest dam, has been providing support to China’s green transition. Its overseas interests cover at least 47 countries and regions in the world, and the cumulative power generation exceeds 100 billion kWh outside China. It is one of the most influential clean energy companies in the world.

In China, more than 550 million people continue to use a mini-program on their smartphones to create a greener world. They have altogether planted more than 200 million trees across China through the Ant Forest mini-program, Alibaba, owner of AliExpress, announced.

From 2010 to 2019, China’s investment in renewable energy surpassed $800 billion, being the largest globally. China owns 1/3 of all clean energy patents in the world.

Friedrich Engels has said, “Let us not, however, flatter ourselves much on account of our human victories over nature. For each such victory nature takes its revenge on us.” His words have continued to be vindicated time and again…

Now, developing countries such as China, India, and Turkey, refuse to follow suit in the destruction of the environment and the planet.

Shan Jie is a reporter from the Global Times of China writing both features and breaking news about the environment. She has been following China’s actions on the climate change topic for years.