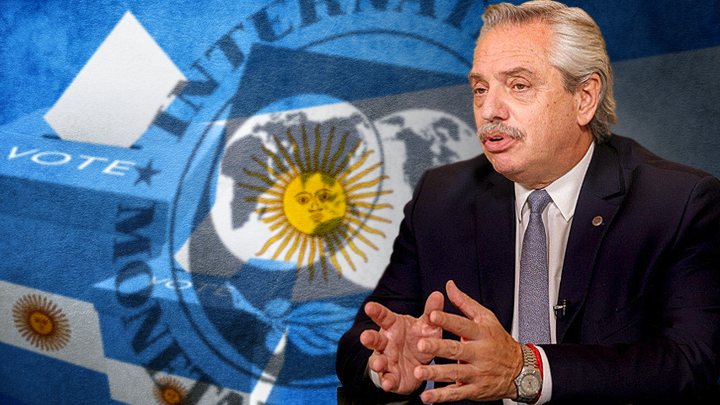 With the results on this weekend election in Argentina, President Alberto Fernández (in accordance with the agreement of all the sectors of the Frente de Todos, he said) and the mayor of Buenos Aires Mayor Rodríguez Larreta (one of the main opposition figures) agreed on the need for a National Agreement whose exclusive agenda is coming to an agreement with the IMF regarding the payment of debt and the multi-year economic program that will be subject to this agreement.

The proposed National Agreement does not include law fare, which today is already claiming new victories with the conviction of Julio De Vido, Ricardo Jaime and progress in the oral trial of the so-called Hotesur Case, which seeks to imprison Cristina Kirchner; nor does it include national sovereignty or the regulation of foreign trade.

The economic program is something that both the so-called “investors” and the IMF itself have been demanding of the government. It pursues a wave of perverse reforms; fiscal (adjustment), labor (flexibilization and wage repression), and a new pension reform. This includes a devaluation, also continuing to consolidate the tendency for Argentina to join the international supply chain for the industrial centers. This is a program that will continue with the hitherto logic of favoring export. The proposed economic goals will be agreed upon with the governing body (IMF) and will have to do with the obvious growing colonization of the economy and the depredation of national wealth. This is nothing new, it is simply a framework for what is already happening.

It is no coincidence that one day after the election results, global bonds traded higher on the certainty of an imminent agreement with the IMF, having cleared any possibility of default. The consultants’ reports coincided in celebrating the government’s weakness in exposing it to an inexorable agreement that alienates our possibilities of economic autonomy. Despite this, the government celebrates in its bunker as if it had triumphed.

We have always stressed that the IMF’s “business” is not to collect debts but precisely to maintain its status as a permanent creditor that allows it to monitor local economies in order to shape and condition them according to the interests of International Financial Capital, the real owner of the organization.

When the president presented it, he said that making an agreement was “patriotic opposition”, which is what he called the actors in the Accord. What he does not say is that the same opposition he calls “patriotic” for making a governability agreement with him are precisely those who contracted the debt swindle in the first place.

The conditions in which Fernández calls for a National Accord (beyond the limited discursive resources he manages which seem like 1980s university chicanery) are of blatant weakness. The results expose a correlation of forces that impose the Agreement and its agenda. This is not a political initiative but an imposition by the establishment.

The government will not have its own quorum in the legislature and although it will hold the first minority in both chambers, this will not be enough to impose special laws. Moreover, legislators have very weak legislative discipline.

The elections recorded the highest abstention rate (71% of voters) in the history of general elections. This in a country with compulsory voting, which added to blank and spoiled ballots, accounted for nearly 11.2 million votes out of 34.5 million voters.

Within the valid votes, the left and reactionary liberals got more than ten percent of the votes.

A simple tally tells us that a significant portion of the population is alienated from the main forms of institutional political production.

The expression of popular nationalism at the electoral level is undoubtedly the Frente de Todos, which has lost millions of votes since the presidential elections to the present day (in only two years).

The defeat by more than ten points (if these were presidential elections, there would be no need for a second round!) is celebrated as a victory in the face of those who predicted an even more catastrophic defeat. With exaltation they explain the political engineering of small payments and overvalue the good results in this or that place, but the truth is that the ruling party lost the elections, lost its own quorum, and won fewer seats than its main opponent (61 seats for JxC against 50 seats for FdT).

The narratives constructed to explain what they consider to be a good electoral performance are based on macro readings, on statistical data, far removed from the daily lives of Argentines. The president explains that “retirement has beaten inflation” but a pensioner earns a minimum of 26,000 pesos and a living wage is 30,000 pesos. According to the figures available up to October, retirees and pensioners lost 7.8% of their purchasing power in the last year. This is because compared to the tenth month of last year, the year-on-year inflation[1] is close to 52%, while the increase in salaries – taking into account bonuses – was 40%. (Cronista Comercial)

They talk about a 9% growth of the economy this year and forget that it is a year that left indices of 40% of the population under poverty levels, of which ten percent face food insecurity.

It is NOT TRUE that the pandemic brought economic recession in Argentina. That is a fake excuse. In the year of the pandemic, cereal exports reached 35 billion dollars, the best year in the last four years. In other words, while 40% of the population was living in poverty, the agro-exporting sectors were making millions. While food prices rose, wages stagnated in lost subsoil and the marginalization of vast popular sectors was consolidated.

Meanwhile, bubbles continue to grow so that the banks operating in Argentina can make immediate multi-million dollar deals they cannot do anywhere else in the world.

We must understand that there can be economic growth, the global context offers these conditions, but in an economy as unequal as ours, to speak of growth is not necessarily to speak of a people with dignity. On top if has the inequality been deepening further.

Changing the structure that produces poverty

The solution is changing the economic structure that produces structural poverty. These changes are not on the agenda of the proposed National Accord.

I still believe that there are a handful of political leaders who will not follow this path to national re-colonization. The entire nationalist heritage of Kirchnerism cannot be trafficked for the crystallization of such a maneuver. The militants must be attentive and vigilant.

The region is suffering from a vicious onslaught of bestial neo-monroism, as we see in Nicaragua, Venezuela and Cuba, whose sovereignty and self-determination are being denied. National businessmen such as Eurnekian, who are very close to the government, are pondering an OAS at the service of US redeployment. The incoming US ambassador, Stanley, is already looking worse than Mr. Braden in the face of the interference warnings that Mr. Stanley has already uttered before settling here.

Some are hoping for a dispute, but the truth is that there is already a well-established track record of neoliberal persistence and a foreign policy that is completely in line with Biden’s desires. It is no coincidence that Beliz rushed to write the speech that Alberto Fernández read out at ten o’clock on election Sunday night.

The popular militancy, the women and men of Argentina with patriotic conviction and anti-imperialist leanings, cannot stand by and watch the perverse “transformation” of the popular will into a consensus for surrender and colonialism. Let’s call a spade a spade.

Conditions of governability are being consolidated, created fundamentally from the weakness of the government; this is a fact, not speculation. Therefore, it is clear that these will be conditions of the reproduction of the administration of public affairs without greater possibilities of real transformations in favour of popular and national interests. This correlation of forces can only be changed by historic action and militancy.

These are very complex times ahead, we are called to fight to transform reality, although as Perón said; “those who cannot stand it are better not to fight. It is also possible to live without fighting”.