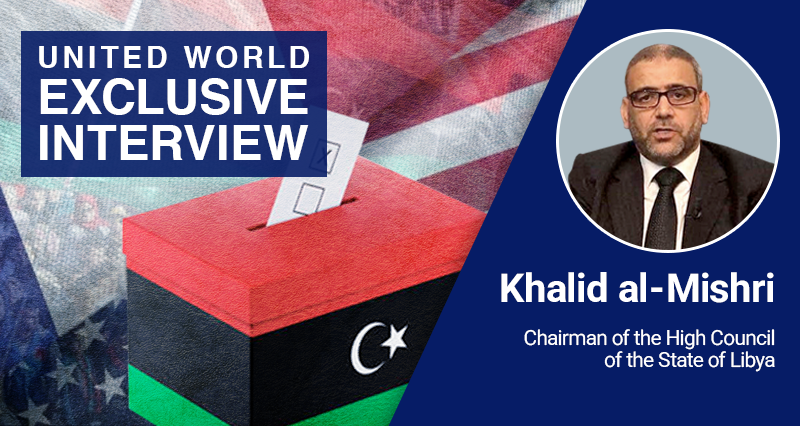 The political uncertainty in Libya is continuing and reaches new heights with the general elections scheduled for December 24. The conflicts between the eastern and western parts of the country and the increased interventions of Western countries even cast doubts on whether the elections will be held on time, as United World International has reported previously.

In this context, the Chairman of the Libyan High Council of State (HCS) Khalid Al-Mishri visited Turkey in the last week.

I interviewed him on Western interventions, the elections’ date and Turkish presence in the country.

The Turkish public opinion follows closely the destiny of the Turkey-Libya Maritime Boundary Delimitation Agreement, which Western countries and especially Greece criticize strongly. What is your opinion on that treaty?

There is also a lot of criticism on Turkish presence in Libya. What is your comment?

The Libyan people have a shared position, that is, that there should be no foreign forces on Libyan soil. But there is an important point in the Turkish presence: Their presence in Libya is legal, they have come upon our invitation, their presence is based on a military agreement and the existence of their forces in our country serves Libya’s interests.

Turkey’s support in both, technical and logistic matters is very important. And I can state clearly: the vast majority of the Libyan people is not against Turkish presence in our country.

Elections are scheduled for December 24, but there are a lot of debates concerning the electoral law. How do you evaluate the process towards the elections?

There are preparations to hold the elections on an illegal base. In such a case, will not recognize the results. The Constitutional Chamber of the Supreme Court attempts the hold the elections in line with laws and regulations, but France is interfering into the electoral process.

Turkey and Italy on the other side do not support holding unlawful elections in Libya. They think that such an election based wrong laws would lead to the country’s division and flame up new clashes. Thus, they support us in the matter.

How do you evaluate the French position in general?

France wants to be present in Libya in order to seek its interests. They justify their intervention in full contradiction to history, geography and logic. They claim that, because Fezzan formerly was their colony, they have the right to have a say. But in reality, their former colonization of Fezzan is a matter they should apologize for.

What we expect from France is that they apologize for the oppression they executed and the damage they caused on the people, geography and cities when they were a colonial power present in Libya. Not that they claim any rights on Libya!

End let me emphasize this: If the elections are hold in a duly and legal matter on December 24, then Prime Minister Abdul Hamid Dbeibeh will receive the majority.