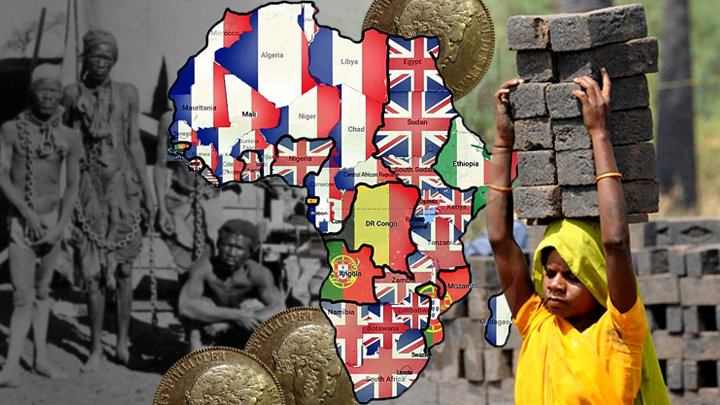 Africa is a continent that is surrounded by the Suez Canal, the Red Sea and Sinai Peninsula at the east, the Atlantic Ocean at the west, the Indian Ocean at the south and the entire Mediterranean at the North, and its entirety includes many islands around.

African continent covers an area of ​​approximately 31 million Km2, which corresponds to 24% of the earth’s surface and an area that equals to three times that of Europe. The African continent, with a population of 1 billion people living in 54 countries, hosts more than 15% of the world’s total population.

Colonialism, which left deep traces in human history, emerged as a product of Western civilization. Technical, scientific and political developments have given birth to strong state structures, and this power has led to the search for new roads and new energy sources.

With the beginning of the colonial history, significant changes have occurred in the world after the 1500s. After this period, it is clearly visible that the West started to rise in the world.

The influence of the Western countries on Africa was the result of a bloody process and completely based on obtaining the resources of the region. There were violent conflicts and wars with the indigenous peoples who resisted the influence of the West in the African Continent. Indigenous peoples who resisted were violently and bloodily neutralized. The enthusiasm of the West to obtain resources on land and above ground in the beginning has evolved into another dimension with the determination of precious metals and strategic mines in the future.

The first Western colonial states to settle on the African Continent were mainly interested in the trade of; cotton from Egypt, Sudan and Chad; coffee from Angola, Ethiopia, Cameroon and Uganda; cocoa from Ghana, Cameroon and Togo; diamonds from Sierra Leone and South Africa; copper from Zambia; rubber from Ghana; animal from Somalia and Volta. However ivory, spices and palm oil became significant trade goods in the following years.

Especially in the post-World War I period, colonial activities reached their peak in the black continent, where minerals such as oil, natural gas, diamonds, uranium, copper, cobalt and gold, which are used in all areas of daily life and considered vital for states, were extracted.

Botswana is one of the world’s largest diamond producers after Russia and Canada. Ghana and South Africa stand out in their gold reserves.

The African countries with the biggest oil reserves are Nigeria and Angola. Natural gas is an especially important underground resource of Libya and Mozambique.

In the African continent, which also has a significant share in uranium used as nuclear fuel, the countries where most uranium is extracted are Niger and Namibia.

Colonial order established in Africa after the World War I

After the First World War, Africa was literally shared by Western countries. Colonial activities that continued until this period were transformed into an ‘official’ colonial order.

In this period, Western countries decided to share the continent in a way that ignores its internal dynamics or social structure, and they tended to establish their own systems by giving priority to economic exploitation. France, England, Italy, Germany, Portugal, Belgium and Spain have taken the entire African continent under control with various applications.

The system of exploitation established by the example of France

Although the French presence in Africa dates back to the late 16th century, the main period of colonial expansion began with the occupation of Algeria in the 19th century.

French North Africa, which formed most of the Maghreb region at the height of French colonial control, and the French invasion of Algeria in 1830 marked the turning point of a colonial period that would last more than a century in North Africa.

France established forms of governments to keep these African countries under its direct control, and implemented assimilation policies by dictating its own system.

France named the countries it colonized in the West African region as “French West Africa” ​​and those in Central Africa as “French Equatorial Africa”. It carried out great massacres to break the resistance of the peoples here.

This situation continued until the end of World War II.

In the new order established after the Second World War, France had to accept the “formal independence” of its colonies – but upon conditions. All African countries have accepted this condition-based independence, except Guinea.

While France was handing over its administrations on paper, it stipulated conditions with its colonization agreements with African countries. France imposed the obligation to use the African Franc as the neo-colonial currency, and moreover, it made the new “independent” countries pay for the infrastructures built by France during the colonial period.

14 African countries, which are former French colonies, continued to pay the “colonial tax” to France since their so-called independence. By establishing the “Commonwealth of French-Speaking Countries”, France prevented its former colonies from breaking their ties with Paris.

France played an active role in many genocides on the African continent, provided weapons and cooperated with the powers that carried out the genocide. France killed millions of Algerians by shooting them or burning them in limekilns during the 132 years of exploitation and occupation in Algeria from 1830 onwards. More than 1 million people were killed in the period between 1945 and independence.

In 1994, a similar process took place in Rwanda and French military units directly supported the conflict. France provided weapons and military training support to the local genociders and had a direct impact on the deaths of nearly 1 million people.

The number of those massacred in Tunisia, Senegal, Niger, Mauritania, Cameroon, Burkina Faso, Gabon, Guinea and Benin is still unknown.

The official language of 27 of 54 countries in Africa is French and nearly 100 million people speak this language.

According to the signed colonization agreements;

– The newly independent countries have to pay for the infrastructure that France built in the country during colonialism.

In accordance with the provisions of the agreement, Central Banks in African countries are obliged to keep at least 65% of the country’s foreign exchange reserves in France to repay their financial debts to France. Also, these African countries have to deposit more than 80% of their foreign exchange reserves in “transaction accounts” controlled by the French Treasury.

– France has the priority in purchasing all natural resources of its former colonies.

– In public tenders, it is imperative to give priority to French companies. Therefore, the largest companies and underground resource enterprises in these countries are in the hands of French settlers.

– Africans have to send their senior education officers to France or French military infrastructures, due to a multifaceted system of scholarships and grants tied to the colonization treaty.

– In accordance with the signed colonization agreement, France has the right to intervene militarily in African countries and permanently deploy troops in military bases and facilities managed by the French.

– According to the colonization agreement, these countries are subject to the obligation to make French the official language of the country and the language of instruction.

– According to the agreement, these countries are also obliged to use the CFA Franc.

– Again, according to the agreement, these countries; In the event of a global war or crisis that may arise, have to ally with France.

Today, France is still continuing its colonial activities on the continent indirectly through agreements and administrative practices.

Especially recently, France has been in a great panic with the African initiatives of Turkey and Russia, and the French leader Macron is trying to put forward a new African strategy. But it is seen that African peoples are starting to raise their voices louder now. We have entered a period when France will pay the price for this massacre that has been going on for centuries and the crimes it has committed in the colonial order.