Afghanistan in the regional vortex 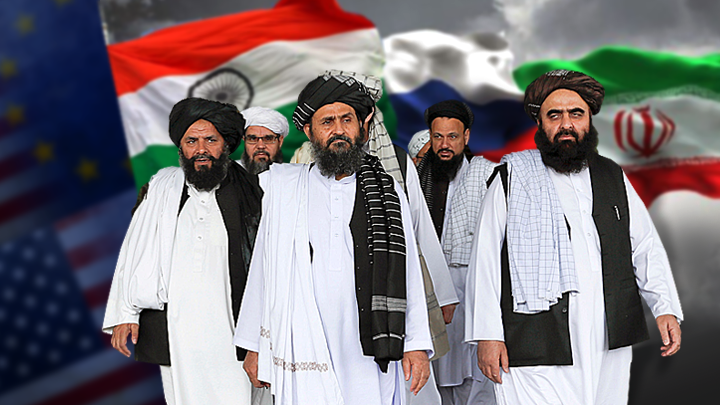 For the past 20 years, countries around the world, particularly Pakistan, Russia, and Iran, pursued anti-US policies until the pullout of US and coalition forces from Afghanistan. With the Taliban seizing power in Kabul, nations in the region are unwilling to recognize the Emirate and are waiting for a global response.

Pakistan, an erstwhile battlefield backer of the Taliban, is now attempting to support the Islamic Emirate diplomatically, but its efforts have so far failed to yield significant results; as a result, Russia and China are seeking to gain ubiquitous political and economic support for the Emirate by holding regional summits. Although recent events in Afghanistan have impacted not only the country but also its neighbors and the region, nations are concerned about the spread of insecurity while in the current context there is a lack of regional consensus for Afghanistan’s stability and economic development. If the region fails to provide Afghanistan with political and economic support based on regional consensus, its instability will highly cost its neighbors and the region.

A matter of recognition

It is critical for international credibility that the Taliban first achieve national legitimacy. Improving security and the economy can help increase the legitimacy of the administration at home. The uncertain fate of the country’s former civil and military personnel, delays in making decisions on girls’ high schools and women’s employment in several provinces, and overall unemployment and poverty internally, undermine the Taliban’s validity. Regional powers such as China, Russia, and Turkey should use their leverage to convene an international conference under the auspices of the United Nations in support of the Afghan public and government unless there is talk of ways out from the economic crisis, since the current situation in Afghanistan is being exploited by certain groups at home and overseas, which could be detrimental to the whole region.

On October 20, Russian Foreign Minister Sergei Lavrov stated at a summit in Moscow on Afghanistan that there is no alternative to the Taliban in Afghanistan and that the world must deal with them since the Taliban have become a reality there. Russia’s special envoy to Afghanistan, Zamir Kabulov, also stated that failing to acknowledge them would result in a crisis. On the other side, Russia and the entire region’s unwillingness to recognize the Islamic Emirate raises concerns and demonstrates a lack of sincerity.

Regional countries are concerned because if they acknowledge the Emirate as a state, the West will apply sanctions on the Taliban and its followers, thus fomenting rebellion. It should be kept in mind that solo governance is not in the Taliban’s interests; they must respond positively to regional and global demands, include all Afghan tribes in government, and adhere to international human rights and other international norms.

Afghanistan is home to about 36 million Afghans who face dire economic conditions. Non-recognition of the Taliban by the wider region would be going to support the programs of a number of countries that want to plunge Afghanistan into yet another quagmire of insecurity; as a result, the spread of poverty in Afghanistan may pose a greater threat to Afghanistan’s neighbors and regional states; countries must reach out now to Afghanis.

The holding of several regional meetings on Afghanistan illustrates that the region intends to garner political and economic support for the Islamic Emirate; yet, the current scenario demonstrates that there is still no regional accord on Afghanistan among the countries. Similarly, adjacent and regional governments try to persuade the Taliban that they will not represent a threat to them.

The Taliban were urged to build an inclusive government at summits in Moscow and Tehran. The Taliban should incorporate all Afghan clans in the authority, which the Taliban believe they have already done to some extent. Russian and Iranian policies, however, hint that they aspire to restore some of the most prominent individuals from the earlier government. The Emirate does not want to get too involved with Iran since it interferes with Afghan religious concerns, especially those in the Middle East, but the threat posed by IS-K in Afghanistan may push Iran to retain closer ties with the Islamic Emirate. Russia, on the other hand, wants to beef up its military presence in Central Asia, citing the threat posed by IS-K as justification.

The military exercises taking place on the Afghan border between Russia and Tajikistan are aimed at deterring threats from Afghanistan and preparing for any eventuality. Such acts, however, demonstrate a lack of confidence between Russia and the Taliban, given the situation. Russian military drills, on the other hand, display Russia’s military might in the region and convince the Taliban that Russia can remain to be a military ally of the Islamic Emirate in the future.

On November 10, India hosted a regional meeting of national security advisors on Afghanistan, which primarily focused on the building of an inclusive government and avoiding future challenges. The non-participation of Pakistan and China in the New Delhi summit, combined with the holding of the Troika Plus meeting on Afghanistan in Islamabad on November 11, reveals a regional rivalry that could impact the result of the New Delhi summit.

China seeks regional political stability and security, notably in Afghanistan, which might open the road for economic progress. Afghanistan’s proximity to China may open the path for greater bilateral commercial expansion. The Taliban must ensure security so that countries in the region can invest and see medium and long-term economic progress in Afghanistan.

To summarize, despite the Taliban’s seizure of government, Afghanistan is expanding its engagement with the region; yet, for the existing system to continue, it needs the assistance of the West as well as the region to confront existing threats. However, it should be underlined that isolating the Islamic Emirate would be harmful to Afghanistan and the entire region, increasing poverty, migration, poppy cultivation, drug trafficking and crime in Afghanistan, and some groups would take advantage of the situation to carry out attacks both inside and outside the territory.

The external pressure and economic embargo on the Taliban appear to be intended at alienating the population from the state and re-establishing separatist organizations that will be sponsored by some states and fight against the government, which cannot be allowed to drag the country into another conflict. Recognizing the government, continuing humanitarian assistance, and strengthening the Taliban’s connection with international NGOs to continue aid and development initiatives in Afghanistan are the best ways out of the current humanitarian and economic crisis.

The Moscow, Tehran, and India summits on Afghanistan have so far generated no substantial achievements, demonstrating an incompatibility among the countries; consequently, regional governments must have a single view and stance on Afghanistan. Similarly, the Taliban should endeavor to reconcile regional and global sensitivities regarding Afghanistan in its foreign policy. The scenario in Afghanistan is likely to worsen further unless an international conference in support of the countries in the region is convened, as well as a joint decision by the nations in the region to recognize Afghanistan. The consequences would be more detrimental to Afghanistan’s neighbors and countries in the region, including Afghanis themselves.

Imran Zakeria is a researcher at the Regional Studies Center, Academy of Sciences of Afghanistan. He has a Master degree in International Relations from Central China Normal University. His research area includes Afghanistan and regional political issues, specifically aiming Chinese and Russian affairs.