The UN and Western Nations mounting pressure on Ethiopia 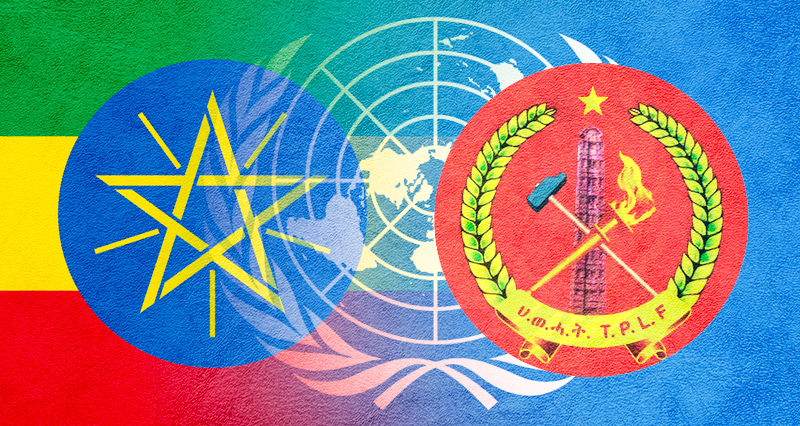 It’s been almost a year now since the armed conflict erupted in the northern part of Ethiopia in the country’s Tigray regional state. Despite a unilateral humanitarian ceasefire declared by the government of Ethiopia months ago with a view to provide humanitarian aid to the people affected by the conflict, the conflict has continued as the Tigray rebel group rejected the call for ceasefire, exacerbating the humanitarian crisis in the region. According to a recent report issued by UNOCHA, the overall situation in Northern Ethiopia remains unpredictable. Military mobilization in the region has continued with ongoing fighting in Amhara and Afar regions of Ethiopia. As a result, the effort to reach a large majority of the beneficiaries has been difficult.

The government of Ethiopia accuses the rebel group Tigray People’s Liberation Front (TPLF) for blocking humanitarian corridors and launching attacks in Afar and Amhara regions of the country by rejecting the unilateral humanitarian ceasefire. However, on the other hand, the UN and other international humanitarian organizations blame the government for not providing access to humanitarian aid in Tigray. The government for its part refutes this argument, saying that as a sovereign country, the government has the responsibility to oversee everything that enters the country particularly at this challenging time. The government blames the rebel group for its provocative activities blocking all humanitarian corridors to Tigray region where millions are waiting for food aid. It also expresses disappointment over UN agencies operating in the region to provide aid to the victims in the region for their refusal to condemn the rebels instead of continuing pointing fingers at the government.

Amidst of all these disagreements, the humanitarian situation in the northern part of the country is growing more dire.

The government of Ethiopia expelled seven UN humanitarian organization staff members last October. The reason for expulsion was meddling in the internal affairs of the country.

According to the statement issued by the Ethiopian Ministry of Foreign Affairs, in connection to the current situation in the Northern part of Ethiopia, some members of UN staff working in Ethiopia have been confirmed to have been involved in activities against the core principles of agreements reached between Ethiopia and the UN. The statement also argues that Ethiopia has repeatedly tried to inform the pertinent official at the UN about the matter.

The statement reads “we had sadly observed that some UN staff have failed to fulfill their mission independently and impartially in accordance with the MoU signed between the government of Ethiopia and the UN as well as the relevant principles of the UN. These serious violations have been brought to the attention of the relevant UN high officials and other international partners on multiple occasions, but to no avail. Despite these communications of concern, the grave violations persisted. As such, as a measure of last resort, the Government of Ethiopia had to ask some officials of UN agencies to leave the country.”

Some of the breaches committed by these UN staffs include diversion of humanitarian assistance to the TPLF, transferring communication equipment to be used by the TPLF, continued reticence in demanding the return of more than 400 trucks commandeered by the TPLF for military mobilization and for the transportation of its forces since July 2021, and dissemination of misinformation and politicization of humanitarian assistance, as indicated by the government of Ethiopia. However, the UN and several western countries including the United States have condemned the decision of Ethiopia to expel the UN staff.

UN Secretary-General Antonio Guterres has told Ethiopia’s prime minister that the international organization does not accept the country’s decision to expel seven UN officials stating that Ethiopia has no legal right to do such things, stating that declaring someone “persona non grata” does not apply to UN personnel.

The EU and its members have also condemned the decision taken by the Government of Ethiopia on September 30, 2021 to expel the UN. The United States for its part threatened to impose sanctions if the decision is not reversed. The United Nations Security Council had also discussed Ethiopia’s decision.

During the meeting of UNSC held on October 6, Ethiopian Ambassador to the UN, Taye AtskeSelassie expressed his surprise that the Council was meeting to discuss the expulsion of UN staff, which was a sovereign prerogative of Ethiopia, explaining the breaches the individuals had committed by meddling in the internal affairs of Ethiopia. According to the Ethiopian Ambassador, UN officials had disseminated false information about people dying of hunger and were biased in favour of the rebel group in TPLF. He further indicated the involvement of the expelled UN Staffs in facilitating the deportation of certain Ethiopian migrants from Saudi Arabia to third countries to be trained to join the TPLF forces.

The claims made by the government of Ethiopia of involvement in the internal affairs of the country have been supported by the comments of other two UN high ranking officials in Ethiopia who have been recalled by their superiors in New York.

In the first weeks of October, two top officials of the United Nations have been recalled by their bosses at the headquarters. The UN Population Fund (UNFPA) country representative to Ethiopia, Dennia Gayle and the International Organization Migration (IOM) Ethiopian head, Maureen Achieng, were recalled for criticizing UN officials on the management of the situation in the country.

The Officials who were put on administrative leave talked about the sympathy provided by some top officials of the UN to the rebel group TPLF who is waging war with the government in Ethiopia to online media outlets.

Two women who mentioned that they are members of the UN Staff in Ethiopia without indicating their names discussed with media journalist Jeff Person that some top UN officials are sympathizing with the TPLF rebel group.

Ethiopians have launched a global twitter campaign against the UN’s decision regarding its officials. The Ethiopians have been demanding the UN Secretary-General Antonio Guterres to launch a full investigation into the manipulation of the UN to support the TPLF.

Ethiopia is now going through a difficult time due to the conflict in the North. Almost all the powerful nations in the west including the United States have now strongly stood against the government of Ethiopia. The US has already imposed economic and travel sanctions on the country. The United Nations Security Council so far conducted more than ten sessions on Ethiopia to discuss the one year old conflict mostly called by the western nations and their allies with a view to enhancing pressure on the government of Ethiopia. However, all the meetings have not so far brought the intended results set by the western nations due to the support provided by the governments of China, Russian and others. These countries have been condemning attempts of interference in the internal affairs of Ethiopia. They are reiterating that the international community should leave the matter to the Ethiopians as they are capable of resolving their internal challenges by themselves.

On the other hand the government of Ethiopia is resisting the ongoing pressures by rejecting calls being made by the westerns to negotiate with the rebel TPLF. The government argues that a sovereign nation would never sit to discuss peace with a terrorist group. Millions of Ethiopians support the government’s stance. Ethiopians across the nation have been expressing their support in the fight against the rebels. For instance, huge demonstrations were held across the nation over the past few days in which, according to government sources, more than 30 million people have taken part. The demonstrators strongly condemned the western pressure, their media campaign and expressed readiness to resist and fight until the end. Mayor of the Capital Addis Ababa, Adanech Abebe said to the huge demonstrators on Sunday that “The external pressures to deprive the freedom, dignity and sovereignty of Ethiopians will never be acceptable. Ethiopians will stand together to resist the ongoing unjust pressures by working hard to free themselves from foreign aid.”

The Prime Minister of Ethiopia Abiy Ahmed also tweeted on Monday that “Overcoming a turbulent period is a mark of national resilience. While we are being tested on many fronts, our collective will to realize the path we have embarked upon has strengthened us. Despite all attempting to hold us back, let’s continue moving forward in unity.”

As the war has expanded beyond Tigray and reached the Amhara and Afar regions of Ethiopia, hundreds of thousands have been marching to the war. The government of Ethiopia and its supporters blame the West for the escalation.

However, efforts to bring peace are being commenced by the African Union. AU High-Representative for the Horn of Africa and former Nigerian President Olusegun Obasanjo is in Ethiopia now. In a speech, posted on the website of the AUC, Obasanjo said “leaders here in Addis Ababa and in the north agree individually that the differences opposing them are political and require political solution through dialogue.” According to him, this move brings a window of hope to resolve the crisis: “this constitutes a window of opportunity that we can collectively tap into to assist the people of Ethiopia find a lasting solution to the ongoing crisis.” However, he cautioned that “the window of opportunity we have is very little and that time is paramount for any intervention in this regard.”