Turkish President’s visit to Azerbaijan over the anniversary of the Karabakh victory; Possibility of another Turkish military operation against terror elements in northern Syria; Vaccination efforts and the ongoing struggle against the COVID-19 pandemic 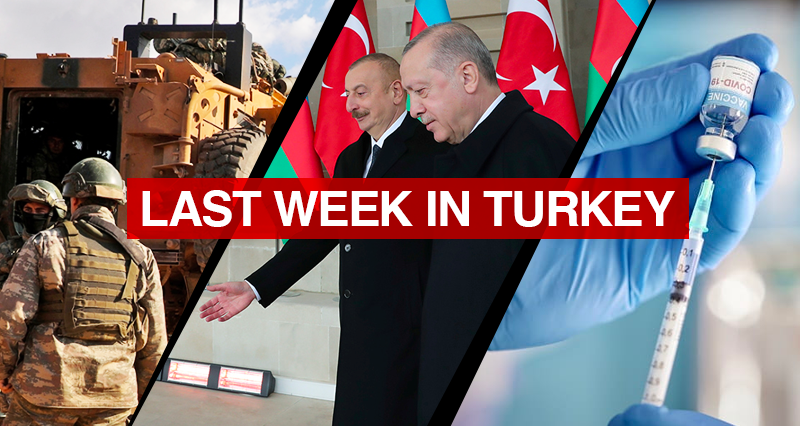 First topic was the official visit by the Turkish President Recep Tayyip Erdogan, to his Azerbaijani counterpart Ilham Aliyev, and their attendance to the opening of the new airport in Karabakh, on the anniversary of the Karabagh victory.

Second was the discussion around the possibility of another military operation by the Turkish Armed Forces against the terror elements in Northern Syria.

Third were the vaccination efforts and the ongoing struggle against the COVID-19 pandemic.

Turkish President Recep Tayyip Erdogan has paid an official visit to Azerbaijan on last Tuesday, his third visit since the liberation of the Karabakh region last November.

Erdogan met his counterpart Ilham Aliyev and attended the inauguration of the Fuzuli International Airport.

The Turkish leader was most recently in Azerbaijan in June, when he visited Shusha, the country’s cultural capital that was occupied by Armenia for 28 years.

Erdogan and Aliyev signed the Shusha Declaration during that trip, a pact focused on defense cooperation and establishing new transportation routes.

The agreement also affirms that Turkey and Azerbaijan will work together in the face of any external threat.

The Turkish president was also a guest of honor as Azerbaijan celebrated its Karabakh victory with a special parade in last December.

In his speech at the event, Erdogan reaffirmed Ankara’s unwavering support for Baku’s security and development goals, vowing that the two countries will make the region “prosperous, developed and more livable place for our children.”

Erdogan is the first head of state to land at Fuzuli International Airport, Azerbaijan’s first airport in the area liberated from Armenia.

Erdogan also attended the groundbreaking ceremony of a highway in Fuzuli.

In a gesture to history, Erdogan and Aliyev buried a handwritten note at the site.

“The foundation of the Horadiz-Jabrayil-Zangilan-Aghband highway (Zangezur Corridor) was laid by Aliyev and Erdogan,” it said.

Erdogan later attended the groundbreaking ceremony of a smart agriculture campus to be built in Zangilan with Turkey’s contributions.

Erdogan also visited an Anadolu Agency photo exhibit at the campus, accompanied by Serdar Karagoz, the agency’s chairman and director-general.

The photos in the “Karabakh Victory” exhibit showcase the deep-rooted fellowship between Turkey and Azerbaijan and dramatic moments from the liberation of Karabakh.

The campus is set to make contributions to both Azerbaijan and Turkey’s food security, as well as send regional agricultural and animal products to world markets.

Before the visit, Turkish officials said the leaders would discuss bilateral relations in all respects, as well as initiatives to deepen the countries’ cooperation.

The leaders have also discussed current regional and international developments, as well as bilateral relations.

On last January, Aliyev laid the foundation for the airport, which was completed in eight months while meeting the highest international standards. The facility’s first test flight was done on August 22nd.

The airport’s terminal can serve 200 passengers an hour, while all wide-body aircraft, including large cargo planes, will be able to easily take off and land at the airport.

Turkish companies also contributed to the airport’s construction, which is equipped with automated systems and a control tower that meets international civil aviation and transportation standards.

The clashes since 1991 have re-erupted on September 2020, with the Armenian army launching repeated attacks on civilians and Azerbaijani forces and also violating several humanitarian cease-fire agreements.

During the 44-day conflict, Azerbaijan liberated several cities and some 300 settlements and villages that were occupied by Armenia for nearly three decades.

The fighting ended on November 10th 2020, after the two countries signed an agreement brokered by Russia.

According to some sources from the state officials, Ankara signaled an offensive to tackle the PKK’s Syrian wing, the YPG, which poses a threat to its national security and local Syrians.

Since 2016, Turkey has launched a bunch of successful counterterrorism operations across its border in northern Syria, Euphrates Shield in 2016, Olive Branch in 2018 and Peace Spring in 2019. These operations all aimed to prevent the formation of a terror corridor and enable the peaceful resettlement of residents.

Tensions have spiked since two Turkish police officers were killed a month ago in a missile attack in northern Syria carried out by the YPG. President Recep Tayyip Erdogan said the attack was “the final straw,” though Ankara has given no indication an operation is imminent.

Previous Turkish operations have been preceded by lengthy build-ups and large movements of Turkish forces at the border, which have yet to be observed this time.

Ankara has not committed to action and has given little detail on plans if a decision is taken.

After meeting the US President Joe Biden in Rome last weekend, Erdogan said: “When it is time to carry out an operation, of course an operation will be done. There is no stepping back from that.”

Efforts to tackle the YPG have been complicated by YPG ties with outer forces and especially the United States, which has been supporting the group.

“We are in coordination with Russia on the matter. The issue was addressed with the United States already,” the Turkish security official said.

The PKK is a designated terrorist organization in the US, Turkey and the European Union, and Washington’s support for its Syrian affiliate has been a major strain on bilateral relations with Ankara.

The US primarily partnered with the YPG in northeastern Syria in its fight against the ISIS/Daesh terrorist group. Turkey, on the other hand, has strongly opposed the YPG’s presence in northern Syria. Ankara has long objected to the US support for the YPG, a group that poses a threat to Turkey and that terrorizes local people, destroying their homes and forcing them to flee.

Under the pretext of fighting ISIS/Daesh, the US has provided military training and given truckloads of military support to the YPG, despite its NATO ally’s security concerns. Underlining that one cannot support one terrorist group to defeat another, Turkey conducted its own counterterrorism operations, over the course of which it has managed to remove a significant number of terrorists from the region.

For months now, Turkey’s leadership has promised to carry out a new military operation against the YPG/PKK forces in northern Syria, but Ankara has found itself having to tiptoe around the presence of US and Russian forces there, confronting a Gordian knot that is likely to dampen its ambitions and delay any large scale offensive, analysts say.

“An operation is inevitable, but the timing will depend on diplomacy, rather than the military aspects in the area,” Omer Ozkizilcik, a researcher at the Ankara-based Foundation for Political, Economic and Social Research, told Al Jazeera

Any Turkish action in the area, Ozkizilcik says, would likely draw a reaction from Russia, the United States, or both, who have a military presence in the areas Ankara would like to take from the PKK/YPG forces.

The US troops withdrew towards east to an area near the Iraqi border, where its troops along with SDF remain today, guarding not only lucrative oilfields in the desert, but also tens of thousands of ISIL fighters and their families in sprawling detention camps.

Since then, Turkish President Recep Tayyip Erdogan and Russian President Vladimir Putin have made a number of agreements aimed at alleviating Ankara’s concerns about the border.

Turkey built a chain of outposts around Idlib, the last largely rebel-held area southwest of Afrin, as a buffer with Russian and Syrian regime forces to the east.

Turkish and Russian forces conduct joint patrols in the area, and Russia, meanwhile, has pledged to disarm the YPG/PKK fighters in a 30km (18.5 miles) strip across the entire Syrian border.

But Ankara says Russia has not kept their side of the bargain, and that YPG/PKK forces continue to attack civilians and Turkish security forces in the area. Over the last few weeks, President Erdogan has repeatedly said Turkey would “do whatever it takes”, to remove all PKK/YPG threats along the border.

“Unlike in the past, Ankara should not expect Washington to ignore any missteps in the region that would jeopardize its ally SDF,” says James Jeffrey, a former US ambassador to Turkey and Iraq and adviser for the Trump administration on its engagement in Syria.

Turkey’s 2019 operation that took the SDF areas between Tal Abyad and Ras al-Ain were met with hostility in Washington, with American lawmakers calling for Erdogan to be punished.

Vaccination efforts and the ongoing struggle against the COVID-19 pandemic

Turkey has administered over 117 million doses of COVID-19 vaccines since it launched an immunization drive in January, according to official figures released on last Thursday.

More than 55.5 million people have been given a first vaccine dose, while over 49 million are fully vaccinated, the Health Ministry said.

Turkey has also given third booster shots to over 11.2 million people.

Meanwhile, the ministry recorded 29,482 new coronavirus cases, 228 related deaths, and 34,743 recoveries over the past day.

Following a virtual meeting of the Coronavirus Scientific Advisory Board on Wednesday, Health Minister Fahrettin Koca said “a booster shot will be given to those who have received mRNA vaccine, based on risk groups” as of today.

Citizens who have taken at least one conventional “whole virus” vaccine shot, such as the Chinese SinoVac, were already allowed to take their booster third shots.

Health workers, patients with chronic illnesses aged between 18-60, and people over 60 years old will be eligible to receive a COVID-19 booster shot six months after their second mRNA vaccine dose, Koca added.

Since December 2019, the pandemic has claimed more than 5 million lives in at least 192 countries and regions, with over 248.3 million cases reported worldwide, according to the US-based Johns Hopkins University.​​​​​​​​​​​​​​

Turkey also continues its efforts to finalize tests of its locally developed Turcovac vaccine, which President Recep Tayyip Erdogan has vowed to share worldwide once it is ready.