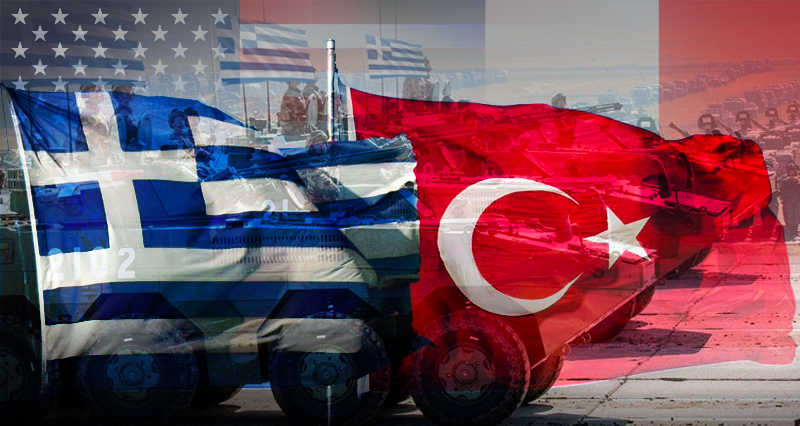 The United States and France have moved towards a new security concept counter to the former NATO principle of collective defense via bilateral “defense agreements” signed with Greece on multiple separate occasions. This action implies the total invalidation of NATO’s article 5, as well as the materialization of what France’s Emmanuel Macron called the “brain death” of the Alliance…

French and Greek leaders met in Paris on September 28, 2021 and signed the “Greco-French Defense Agreement”. The agreement, which approves Athens’ purchase of three frigates worth 3 billion euros from Paris, also denotes that “in the event of an attack by a third party, the two countries have alleged to cooperate militarily”.

Similarly, in the “Mutual Defense Cooperation Agreement” (MDCA) signed between the United States and Greece on October 15, 2021, the parties declared their “determination to mutually protect their security, sovereignty, independence and territorial integrity against any acts or attempts that threaten the peace, such as military attacks or the threats of an armed attack”.

Before we move on with the content of these bilateral agreements, we need to explain how the development of this new trend of bilateral defense agreements among NATO members is fundamentally contradictory to NATO’s very existence.

NATO article 5 relates to the concept of collective defense, based on the statement that an armed attack on any of the Alliance members would be considered an attack against the entire Alliance. However, when the bilateral agreements between the United States/France and Greece are closely examined, it is clear that Turkey is described as the main threat. Moreover, after these bilateral agreements, the Greek Foreign Minister Nikos Dendias made it clear what that “threat” was, referring to Turkey’s ‘casus belli’ resolution in 1995. In this case, the United States and France have concluded which side they would be on in the event of an escalation in tensions between Turkey and Greece, two NATO members. That is exactly why the Turkish Defense Minister Hulusi Akar issued a warning:

“NATO is a defense organization. Members concluding a separate layer of alliances with each other, will divide the defense forces of both the EU and NATO. Members can clearly see that. However, some member countries do not pay attention to them out of their egoism, or the political ambitions of their leaders, and thus are both harming the unity of NATO and the EU and endangering the security of Europe.”

What are the goals of the United States and France?

The common goal of both these countries, whose areas of interest differ significantly from each other, can be brought under a common agenda of preventing Turkey from becoming a “regional power”. For this reason, they are trying to isolate Turkey from regional crises by using Greece against Turkey. Every single firearm, every piece of ammunition and all military aid given to Athens is part of an effort to isolate Turkey.

Turkey, which has been taking a proactive stance on regional issues in recent years, has been a game-changer in Syria and Libya, played a critical role in the victory of the Karabakh War, has been improving relations with other Turkic Republics and has been establishing partnerships with rising powers of Asia. It has also been avoiding sanctions with the steps it is taking in the national defense industry, ending its long time position as a “controlled ally”.

When examined from a French point of view, France’s reputation, despite still generating 400 billion euros each year from former colonial regions, was heavily damaged after the Turkish diplomatic incursion into Africa on the basis of equal partnership. Turkey has already started to be an alternative to France with both its construction projects and mining industry, while increasing its number of embassies in Africa from 12 up to 43 in only 19 years. In terms of numbers of international flights to Africa, Istanbul has overtaken Paris, while the General Directorate of Mineral Research and Exploration (MTA) has taken over the mining sector in Niger where France sought to buy its uranium, and the Turkish Armed Forces have made a military intervention in Libya, where France sought to exploit the divided country’s oil riches. Thus, the Turkish Armed Forces’ reach almost to the Western Mediterranean through Misrata and al-Watiya Air Bases, became a primary threat to France.

The situation is even more dire for the United States. Turkey prevented the project to create a second Israel by dividing Syria with its military operations of Euphrates Shield and Peace Spring, simultaneously preventing Russia from being contained through its Black Sea diplomacy. It was Turkey who defeated the US-backed Haftar in Libya and Pashinyan in Karabakh. Moreover, tens of thousands of FETO members, the intelligence organization developed as a branch of Operation Gladio to be used in the service of the United States in 40 countries, have been prosecuted in Turkey. Thus, Turkey, which Antony Blinken called a “so-called strategic partner”, was promoted to the category of “adversary”.

Will Turkey and Greece ever go to war?

There is no comparison to be made in terms of the military might of Turkey and Greece: Turkey has the upper hand if we consider factors such as high fighting power, supply and logistics capacities, larger domestic and national defense industries, larger human resources, its economic diversity and the range of its continental shelf. However, it seems that the tension between these two countries would not be limited to them alone. Turkey is well aware that an entire imperialist bloc, including the United States, Israel and France, would take Greece’s side against Turkey. That is why Turkey is trying to take precautions against these nuclear powers instead.

There are hundreds of examples that will prove these Turkish concerns are real.

For example, in chapter 15 of the book Fleet Tactics and Naval Operations published by the US Naval Institute, geographical maps of Turkey are used. In the book, Turkey is portrayed as a “strong foe with a long-standing previous friendship”. The war scenario is situated around the challenges of fighting in a coastal area of limited area of movement, addressing the so-called American efforts to deescalate the possibility of war in the Aegean Sea between Turkey and Greece, which are described as ‘archenemies’. However, under the scenario in which the US 6th Fleet confronts the Turkish Navy, the situation quickly escalates into a full-fledged conflict between Ankara and Athens, whose relations are deeply strained due to Cyprus, at which point the United States takes a stance in favor of Greece. According to the book, in a possible Greco-Turkish war, the US 6th Fleet will fight alongside the Greeks and against the Turkish Navy.

And since scenarios similar to these have been written and implemented for countries such as Iraq, Syria, Afghanistan and Libya before, the US’ threat must be taken more seriously in Turkey than the Greek threat would on its own.

Who is the expansionist?

However, none of the allegations that Turkey is expansionist, that neo-Ottomanism will resume, that international law has been violated by Turkey, that Turkey supports terrorist organizations, and that the democratic order in the country has been abolished, hold any truth. As a matter of fact, Turkey respects international law almost to the extent that, as some Western diplomats have noted, it is disadvantageous. To understand against whom we could legitimately make maximalist and irrational claims, it is necessary to list some examples:

– In accordance with the moratorium signed between Turkey and Greece in 1988 to protect the tourism sector in the Aegean Sea, it is agreed to avoid any military activities between 15th of June and the 15th of September, yet Greece has been conducting naval exercises between these dates regularly.

– 40,000 square kilometers of maritime area are being claimed by Greece through the island of Meis (Castellorizo), which is known to be situated on the Turkish side of the Mediterranean, cannot sustain itself economically, and is only 2 kilometers from the Turkish mainland.

– Rejecting the idea of going to the International Court of Justice for disputes, Greece is also taking decisions from its parliament to prevent such a future attempt as well.

– While the Treaty of Lausanne stipulates the demilitarization of the 30km zone from the Turkish land border in Thrace, Greece is inviting the United States to turn the region into a massive military base.

– Despite all the agreements made regarding the island of Cyprus, the Greek Cypriots are becoming a member of the EU, the arms embargo is being lifted, the hydrocarbon reserves are being used unilaterally and the Turkish Cypriots are being ignored throughout this process.

If Turkey was the aggressor…

Encouraged by the United States and France, the Greek mainlanders and Cypriots have taken hundreds of irrational and illegal steps, citing Turkey’s aggression as the reason. However, if Turkey were the aggressor; let us outline what it could have done:

– It could have stopped Greek and Greek Cypriot freighters passing through the Straits in accordance with their rights given by the Montreux Straits Convention and could have halted their entire international trade.

– It could have annulled the 1988 moratorium and could end tourism on the Aegean islands of Greece.

– It could have landed on the islands, islets and rocks whose sovereignty has not been determined.

– It could have imposed a return to the 3-mile regime in the Aegean Sea as it was agreed upon with the Treaty of Lausanne.

– It could have extended its Exclusive Economic Zone all the way up to Tunisia,

– It could have cut off all vital connections to the mainland of the Greek islands closer to Turkey.

– It could have stopped all gas imports by not renewing its ShahDeniz agreement with Greece.

– It could have increased its military activities, engaged in harassment across borders, and could completely disrupt the peace among the local population of the region.

Let alone doing any of these actions, Turkey has even ceased all its seismic exploration/drilling activities in its maritime jurisdictions in order to solve the issues through mutual dialogue.

In conclusion, the tensions between Turkey and Greece is, in essence, a struggle between the Atlanticist camp and Eurasia. The United States and France are trying to take Turkey out of the equation and isolate it from the regional issues by pitting Greece against us. However, these countries which all have lost their former “invictus” status decades ago, have little to none leverage. Today, no initiative can see success without considering Turkey as a significant player.

Greece today gives the image of a mandate territory, with all the concessions granted to the United States and France. It has even resorted to cooperating with its historical rival Israel against Turkey. It has offered up its national defense industry to these powers, and has fallen to such a low level it cannot print even its own money in its own central bank. Greece is now approaching one of the greatest catastrophes in its history unless it starts to resist the United States and France.

Turkey is determined to prevent the West from stealing its riches by modern piracy, creating turmoil and instability in the region and fueling the tensions by fabricating disputes among regional countries. It now focuses on fighting against the non-regional actors and their puppets, for the peace, prosperity and security of the region. In doing so, it relies on the rising Eurasian powers, while taking great care to remain within the limits of international law in this struggle. The struggle of Turkey is the struggle of all oppressed countries to return to their feet.