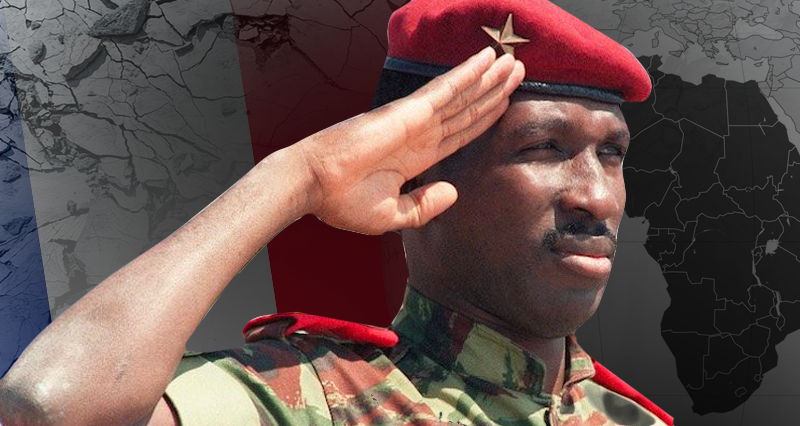 “While revolutionaries as individuals can be murdered, you cannot kill ideas.“

In Burkina Faso, the trial for the 1987 murder of Thomas Sankara has begun. The suspects include 14 people, one of whom is former president Blaise Compaoré.

During Compaoré’s long reign, the subject of Sankara’s murder was taboo, leaving many unhappy that the killers were never punished. Interesting details are now emerging about France’s involvement against the “African Che Guevara” – the man who gave Africa hope of liberation from French colonialism and the oppression of the IMF and the World Bank – and who was a very uncomfortable figure for Paris.

Who is Thomas Sankara?

Thomas Sankara was a famous revolutionary and a well-known pan-Africanist, a legendary figure for supporters of a multipolar world, anti-globalists and patriots from different fronts on the continent and beyond.

Sankara achieved the position of prime minister in the country in 1983 in a bloodless coup. Then, after surviving his arrest, the 33-year-old politician came to power in a military coup on August 4, 1983.

Sankara is a symbol of resistance to French colonialism on the African continent. It was he who changed the old colonial name of the country, Upper Volta, to the modern Burkina Faso, it was he who dared to challenge internal corruption, French external pressure and the foreign debt system.

Sankara was extremely popular in Burkina Faso: he was close to the ideals of social justice, nationalization, he was also a well-known defender of oppressed women.

Sankara was notable for his simple lifestyle and lack of passion for material goods: he refused expensive cars and even a basic air conditioner in his office in order to be on an equal footing with his fellow countrymen.

Sankara began to cleanse the country of corruption immediately: the government’s fleet of Mercedes was sold off and replaced with simple models. Officials’ salaries were cut, working conditions were no longer elitist. Strict income checks were carried out on civil servants, and many were fired and sent to work on farms. Sankara also demanded that they conform to their people, right down to wearing traditional tunics instead of expensive Western suits.

Sankara is credited with significant improvements in health care, including vaccinations against major infections and a multiple reduction in infant mortality. The country’s leader also managed in such a short time to implement effective social programs – the construction of factories, houses, wells. He helped the residents of Burkina Faso to cope with small debts, got rid of the per capita tax and introduced a program of accessible education (literacy in nine local languages).

One of the Sankara`s most effective, even revolutionary reforms for a poor African country was agrarian. Tribal chiefs were deprived of tribute and other privileges in favor of the peasants, after which in three years the yield of wheat increased from 1700 to 3800 kg per hectare. This, in turn, helped Burkina Faso become self-sufficient in staple goods.

In the area of governance, Sankara also made innovations. The old structure of tribal power was replaced by Committees for the Defense of the Revolution (in the spirit of Cuba).

Sankara became a role model for pan-Africanists, socialists and anti-imperialists. He always remained a staunch critic of colonialism and neocolonialism, dependence on the West and international neoliberal organizations such as the IMF and the World Bank. It was under Sankara that the country stopped borrowing from the IMF.

He saw debt as a key mechanism of neocolonial control:

“Debt has to be seen from the perspective of its origins. (…) Those who lend us money are those who colonized us. They are the same ones who used to manage our states and economies. “

Under Sankara, the country gradually ceased to depend on foreign aid. According to him, Western “aid” perpetuated “beggar reflexes” in our African minds, and urged us to produce goods ourselves.

As a result, the people’s hero was shot on October 15, 1987, along with other comrades-in-arms.

The betrayal of Compaoré

The 1987 coup was staged by Sankara’s former associate, Blaise Compaoré, who was not at all attracted by socialist ideals. Compaoré openly declared that Sankara had jeopardized international relations with France and neighboring Côte d’Ivoire.

Compaoré immediately rehabilitated neocolonialist ties with France. He merged all of Sankara’s past achievements in favor of “good relations” with Western countries. It is worth noting that he had interned in France before coming to power.

Compaoré reversed the nationalization processes launched by Sankara. He restored high salaries for officials, bought a private Boeing with funds earmarked for the reconstruction of the suburbs of Ouagadougou. And most importantly, he re-engaged Burkina Faso in the debt of international organizations. In 1991, Burkina Faso accepted a $67 million loan from the IMF against French guarantees.

“Under the presidency of Blaise Compaoré, Burkina Faso has established itself as an important partner of France and the West in general. The Compaoré regime has played an essential role in West Africa and in the resolution of crises. So the West preferred to turn a blind eye to the dark side of the Burkinabe regime that has just fallen under pressure from the street”, RFI notes.

“Compaoré will soon become one of the pillars of Françafrique in the sub-region, while reinventing himself as a mediator to forget his past as a putschist”, wrote RFI.

In 27 years, the Sankara case is by no means Compaoré’s first crime. He was accused of complicity in the 1998 murder of journalist Norbert Zongo (coincidentally, investigating the tortured death of the ex-president’s brother’s driver), arms and diamond trafficking with Angolan rebels, and many others.

Compaoré was a pro-French politician integrated into Francafrique politics through various channels. In particular, Compaoré was initiated into the Grand National French Lodge (GLNF), which included other Francafrique agents on the continent – the late Gabonese president Omar Bongo, his son Ali, their Congolese counterpart Denis Sassou Nguesso or Chadian Idriss Déby. This is an additional opportunity to integrate Franco-African networks of influence through deeper ties.

Compaoré also began working closely with the Americans, as evidenced by the contents of letters from the American ambassador Jeanine Jackson made public by WikiLeaks.

In the end, Compaoré worked for the interests of other countries, but certainly not Burkina Faso. After seizing power for 27 years and leaking Sankara’s ideas, Compaoré was eventually overthrown by his neoliberal policies and fled to Côte d’Ivoire, which granted him citizenship. Importantly, Compaoré found refuge with the support of French President François Hollande.

As RFI writes, there was already constant contact between France and Blaise Compaoré. With the support of Hollande’s office, Compaoré was first taken by helicopter to the eastern Burkina Faso, where there is an airfield, and then to Yamoussoukro, Côte d’Ivoire.

But now not even French patronage can protect Compaoré from accusations of crimes. Now he, along with General Gilbert Diendéré (who is already in prison for plotting in 2015), former military officer Hyacinthe Kafando (on the run), and others are accused of killing Sankara, damaging state security, and complicity in hiding corpses.

Compaoré himself denies guilt. His lawyers have stated that as a former head of state, he enjoys immunity.

Many suspect that the French government supported Sankara’s assassination because it was extremely alarmed by his anti-imperialist rhetoric and opposition to IMF and World Bank policies, writes Heidi Chow. In recent years, France has allegedly made a broad gesture and shared declassified documents about Sankara’s assassination with the Burkina Faso government, but, as the article notes, has not made those documents publicly available. Obviously, because Paris has something to hide.

France opposed Sankara’s personality from the beginning, since socialist reforms were in no way part of Paris’s neo-colonialist plans. The first serious conflict arose in 1983, after Sankara’s appointment as prime minister: immediately after the visit to Burkina Faso of the French presidential adviser for Africa, Jean-Christophe Mitterrand, Sankara was stripped of his post and arrested with his associates, which provoked the righteous anger of local residents.

Sankara repaid France with the same coin. In 1984, Burkina Faso decided to boycott the France-Africa summit held in Bujumbura. When President Mitterrand visited Burkina Faso in 1986, Sankara publicly criticized him.

International diplomacy was then launched against Sankara at the initiative of Paris. In 1986, a conference of leaders of Burkina Faso’s neighboring countries was held in Yamoussoukro, under French patronage, during which participants demanded that Sankar roll back social initiatives. At the same time, according to many experts, a plan to assassinate the revolutionary began to be developed.

For example, the well-known pan-Africanist Kémi Séba believes that there is great hypocrisy in the death of the leader of Burkina Faso 30 years ago, because “everyone knows who was behind the murder”. According to him, it is France that is responsible for the death of the African legend of anti-imperialism.

“Everyone knows that most of the people at the head of Burkina Faso were people who went along with Mr. Compaoré, and so they do not want to advance an investigation that, if it goes too far, could make them complicit in the murder”, Séba argues.

He also points to the naivety of those who think France can help advance the truth in this matter.

“When we wait for Mr. Macron to be able to pronounce on this subject, France has no interest in acknowledging its responsibility. It is not going to acknowledge responsibility for a crime that has been carried out and that continues…”, he added.

Is there hope for a fair trial?

It is obvious that Emmanuel Macron will once again play the hypocritical card, pretending to be sorry for the brutal murder. His aim is to divert attention from the direct responsibility of France and to make a scapegoat of Compaoré, who nobody needs anymore. Especially since Compaoré is not going to attend the trial.

It is worth noting that for years the trial and the investigation have been obstructed. In addition to hiding information about the killers, up until 2015, the bodies of Sankara and his comrades were not allowed to be exhumed. After examination, it became clear that the remains contained more than a dozen bullets fired from Kalashnikovs, pistols, and G3 automatic rifles. This gave additional grounds to accuse Compaoré and his accomplices.

Sankara’s widow, Mariam, who lives in the south of France, came to Ouagadougou for the opening of the trial and hopes it will be “a day of truth for me, my family and all Burkinabe.” The family’s lawyer, Stanislas Benewende Sankara, added that the absence of Compaoré was a “slap in the face” to Burkina Faso’s justice system.

There is no hope for full justice yet. France, the main perpetrator of Sankara’s death, will cover up the trail of crimes, and only one of Paris’ little puppets: Compaoré will remain in the spotlight. Meanwhile, the cowardice and greed of the pro-French politician has deprived the country of its chance for independence, drawing it further and further into debt and dependence on international financial institutions and a neoliberal policy of looting resources.

Nevertheless, the memory of Sankara’s deeds will last forever. Africa remembers everything, and at the slightest opportunity, relying on the ideas of the revolutionary, it can ensure its autonomy in a multipolar world.