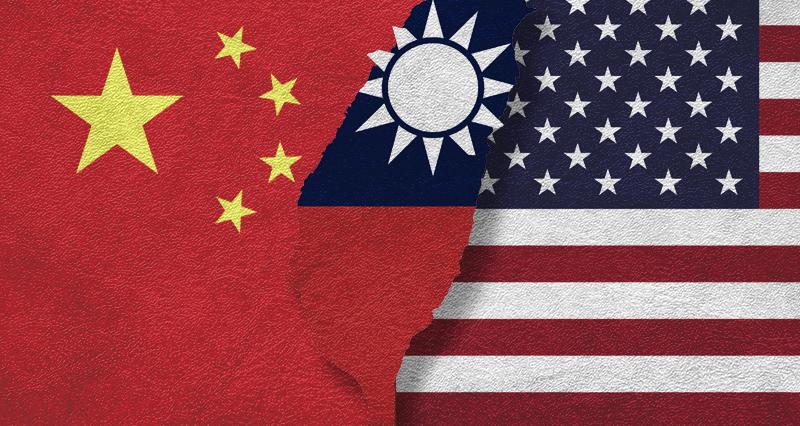 The conflict between the United States and the People’s Republic of China is heating up around the island of Taiwan. The US is delivering signs of distancing from the One-China-policy, while China insists on re-unification with the island and underlines claims with elevated military activity in the region.

Since the 1979 Joint Communiqué of the US and the P.R. of China, Washington follows the so-called One-China-policy, having changed diplomatic recognition from Taipeh to Beijing.  The US Department of State formulates this policy as follows:

“The United States and Taiwan enjoy a robust unofficial relationship. (…) In the Joint Communiqué, the United States recognized the Government of the People’s Republic of China as the sole legal government of China, acknowledging the Chinese position that there is but one China and Taiwan is part of China. (…) The United States does not support Taiwan independence. Maintaining strong, unofficial relations with Taiwan is a major U.S. goal, in line with the U.S. desire to further peace and stability in Asia.”

According to this policy, the US has no official and diplomatic relations with Taiwan, whose sovereignty and independence is not recognized and international representation rejected.

But already in 1979, with the Taiwan Relations Act, the US has allowed itself to “provide Taiwan with arms of a defensive character and maintain the capacity to resist any resort to force or other forms of coercion that would jeopardize the security, or social or economic system, of the people of Taiwan”.

Now, the US is moving the pendulum towards deepening relations with Taiwan, headed towards the recognition of the island as an independent state, actively fighting Chinese efforts of reunification with the mainland.

US troops on Taiwan

A U.S. special-operations unit and a contingent of Marines have been secretly operating in Taiwan to train military forces there, US officials said to The Wall Street Journal on October 7.

The spokesperson of the Chinese Foreign Ministry reacted by calling the US to “abide by the One-China-Policy and stop military ties with Taiwan to avoid seriously damaging China-US relations and peace and stability across the Taiwan Strait”.

But the US is stepping up its preparations for conflict. The CIA is creating a new center focused exclusively on gathering intelligence about China and countering its espionage against the United States, another sign that senior U.S. officials are preparing for an all-encompassing, years-long struggle with Beijing, reported and interpreted the Washington Post.

CIA Director Burns made the announcement in a speech held to the agency’s staff on October 7.

At the same time, US sources increasingly question the continuation of the One-China-Policy. The retired US Navy Admiral James Stavridis expects in an editorial for Bloomberg Biden to abide by the One-China-Policy but to “increase the cost of invasion” for China, including initiating high-level exchanges of senior officials.

US Senators question “ambiguity” towards Taiwan

But two lawmakers have called for an end to the US’ “strategic ambiguity” towards Taiwan in conversations with POLITICO. “I think that removing the ambiguity would be good,” Sen. Thom Tillis (R-NC), a member of the Senate Armed Services Committee and the ranking member of its personnel subcommittee, said. Likewise, Rep. Ami Bera (D-CA), a member of the House Foreign Affairs Committee and the chair of its Subcommittee on Asia, the Pacific, Central Asia and Nonproliferation, agreed that he backs a “move away from strategic ambiguity.”

Both Senators called the US to “defend Taiwan against a possible Chinese invasion”, with Tillis warning that China may “potentially threaten Taiwan’s sovereignty” – a sovereignty officially not recognized by the US.

In an interview on October 7, the Democrat and Senate Foreign Relations Committee chairman Robert Menendez stated that it’s important that the US sends a message to China that it will “not allow what occurred in Hong Kong to happen to Taiwan”. He said for the security of the region, it’s crucial that the U.S. not let Taiwan fall under such circumstances.

The Senator also congratulated Taiwan on its national day.

President Biden meanwhile defended the official line beginning of October, stating “I’ve spoken with Xi about Taiwan. We agree … we’ll abide by the Taiwan agreement,” he said. “We made it clear that I don’t think he should be doing anything other than abiding by the agreement.”

6 Republican senators reacted with a letter directed to the Senate Foreign Affairs Committee, demanding further information on the cited agreement and emphasizing that “the 21st century will be largely defined by whether the United States and its allies and partners meet the diplomatic, economic, technological and military challenges posed by China”.

The trend to questioning the One-China-policy was further highlighted in past August, when the US sent Secretary of Health and Human Services to visit Taiwan, being the highest-level visit by an American Cabinet official since the break in formal diplomatic relations between Washington and Taipei in 1979.

In the recent weeks, the official visit of French senators to Taipeh, the pasaage of a British carrier group through the straits between China and Taiwan and declarations from Japan further indicated that the One-China-Policy might be abandoned in favor of officially recognizing Taiwan – and defending it against Chinese attempts of reunification.

In a statement from October 3, the US State Department declared that the US commitment to Taiwan is “rock-solid” and that it “will continue to assist Taiwan in maintaining a sufficient self-defense capability”.

State Department spokesperson Price underlined his country’s will to the “maintenance of peace and stability across the Taiwan Strait” – that is the separation of China and Taiwan.

The People’s Republic of China on the other side insists on its goal of unification. “The complete reunification of our country will be and can be realized,” said Chinese President Xi Jinping, also general secretary of the Communist Party of China (CPC) Central Committee, at a commemorative meeting on Oct. 9 marking the 110th anniversary of the Revolution of 1911 that ended the country’s thousands-year-long absolute monarchy.

Xi insisted that the Taiwan question is purely an “internal matter for China”.

A Chinese mainland spokesperson on Monday expressed strong opposition against military contacts of any form between Taiwan and the United States.

Ma Xiaoguang, a spokesperson for the Taiwan Affairs Office of the State Council, made the statement when commenting on media reports that U.S. military personnel have a clandestine presence in Taiwan.

“We urge the United States to abide by the one-China principle and the provisions of the three China-U.S. joint communiques when handling issues related to Taiwan,” he said.

The military exercises launched by the Chinese People’s Liberation Army (PLA) in the Taiwan Straits aimed at “Taiwan independence” secessionist moves and interference by foreign forces, and they are necessary actions to safeguard national sovereignty and territorial integrity, the Taiwan Affairs Office of the State Council said on Wednesday according to the Chinese newspaper Global Times.

Taiwan’s defence ministry warned China of strong countermeasures on Wednesday if its forces got too close to the island.

Military tensions with China, which claims Taiwan as its own territory, are at their worst in more than 40 years, Taiwan’s defense minister said last week, adding China will be capable of mounting a “full scale” invasion by 2025.

Most observers do not expect a full-scale war around Taiwan in the short term. But the US containment policy towards China increasingly includes a de facto recognition of Taiwan, which China considers a violation of its territorial integrity and national unity. Therefore, continued tensions are to be expected around the Strait of Taiwan.

One response to “Tensions around Taiwan”