The Shukry-Al-Miqdad meeting: The opening scene for a more effective role of Egypt in Syria 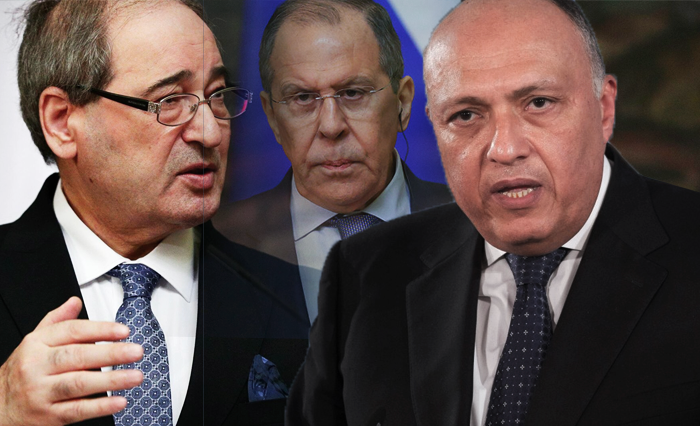 “There is no war without Egypt and no peace without Syria.”

This phrase, repeated by many Arab diplomats, experts and officials during the past decades, is more than just verbal rhetoric. It reflects the complex nature of the relationship between the two countries. In other words, one country cannot do without the other. One hand holds the key to war and other the key to peace.

In ancient history, the Levant was the source of most of the external dangers threatening Egypt. No external power coming from Asia was able to reach Egypt before it tightened its grip on that region. At the same time, Egypt did not succeed in winning its battles without coordinating with the existing authority in the Levant, whatever its name. In recent history, nothing has changed.

In the past, King Ramses II did not succeed in stabilizing Egypt until he signed the first peace treaty in history with the Hittites after his battle against them in the city of Kadesh, located on the western bank of the Orontes River in Syria, south of Lake Homs.

Several centuries ago, the Mamluk sultan Qutuz did not succeed in repelling the danger of the Mongols until he went out to meet them in Ain Jalut, which is located in present-day Palestine. And he then succeeded in expelling them from the cities of the Levant.

In the modern era, Egypt could not defeat Israel in 1973 without coordinating the offensive with Syria. Meanwhile, the peace between Cairo and Tel Aviv did not turn into an Arab-Israeli peace because of Damascus’ refusal to engage in the peace process.

This background explains the importance of the two countries to each other, to the point that prompted President Gamal Abdel Nasser in the fifties of the last century to establish a unity between Egypt and Syria under the name of the United Arab Republic, an experiment that failed for reasons that have no place here.

Syria has always been Egypt’s gateway to the Arab Mashreq, and for the reasons abovementioned, it has always been at the heart of Egyptian and Arab national security considerations.

Therefore, its collapse or disintegration into sectarian states poses a threat to the region as a whole as well as to Egypt and its national security, given its political and strategic interests linked to the survival of Syria as a unified state.

At the outbreak of the Syrian revolution in 2011, which turned into a civil war, these historical and strategic considerations were the determinant of the Egyptian position on that crisis until today.

In the beginning, it was a state of silence and caution as a result of the instability that Egypt witnessed. Therefore, Cairo took the positions and practices of the Arab League as a new starting point.

But the Gulf countries, which represented the greatest weight in drawing and directing the League of Arab States and its decisions, tied up any real role for Egypt.

It were the Gulf states that formed the Arab position, which at the froze Syria’s membership in the Arab League months after the outbreak of its revolution, despite the objections of Egypt, Lebanon, Algeria, Mauritania and Iraq.

The Supreme Council of the Armed Forces was the one in charge of Egypt at the time, as there was chaos in all of its institutions. Cairo could not do more than object.

With the Muslim Brotherhood taking power in Egypt, there were no clear differences between their position on the crisis in Syria and that of the Gulf states.

At that stage, relations between the parliaments of the two countries were severed on February 7, 2012, followed by summoning the Egyptian ambassador in Syria for consultations on February 19 of the same year, and the Ministry of Foreign Affairs ended his work on July 1, 2012, and the diplomatic representation at the Egyptian Embassy in Syria was reduced to advisor level.

The Brotherhood’s position reached its climax with President Morsi’s call for jihad in Syria, a position that drew Cairo into the conflict and neglected Egyptian national security.

Responding to this call meant that Egypt would face the eruption of the situation in Syria, which we have previously explained as the source of every danger to Egypt historically, unless it has a stable country and a friendly government. It meant that Egypt would later face the problem of “returnees from Syria” similar to those returning from “Afghanistan”, from Chechnya, Albania, or the like. All this meant an expected threat to Egyptian national security.

The army in Egypt was disturbed by the idea of encouraging the head of state to turn that country into an “ant house” for jihadists, threatening the security of the Egyptian state.

What made matters worse: Morsi not only called for jihad in Syria, but also announced the severing of relations with Damascus.

The speech of the Egyptian president put an end to the patience of the army, which has endured a lot of transgressing the red lines of national security, so that the transitional period may pass peacefully.

Perhaps I am not exaggerating when I say that this call was one of the main reasons that forced the army to intervene and overthrow the regime of the Muslim Brotherhood in Egypt.

With the return of power in Egypt after July 3, 2013 to the traditional political and bureaucratic class, which knows the importance of Syria’s value to national security, Cairo has abandoned its silence about what is happening there.

The June 30, 2013 revolution provided Egypt with an opportunity to restore stability and build executive and legislative institutions. This contributed to returning the compass of the Egyptian position on the Syrian crisis to the right direction.

Since then, all Egyptian statements and positions have been supportive of preserving the unity of the Syrian state, supporting its national army, supporting any political solution to the crisis that integrates moderate opposition forces, and rejecting any proposals or initiatives that legitimize terrorist groups.

Egypt has taken more and more challenging positions in this regard, as Cairo publicly supported the Russian military intervention in Syria. Egypt’s relations with the Gulf states did not prevent Cairo from siding with Syria and from supporting this intervention in favor of the state, the regime and the army in Syria in the face of terrorism.

Despite clear support for this intervention, Egypt has also participated in presenting a resolution formula with other countries in the Security Council for a ceasefire, for a period of 10 days, to facilitate the provision of humanitarian aid to the people of Aleppo and the Syrian citizens. This position did not win the approval of Russia, and it criticized and described it as a provocative position.

This means that Egypt has not ignored the humanitarian and tragic dimension of the Syrian crisis and its civilian victims, neither on its land nor in Syria itself. It receives increasing numbers of Syrian refugees and treats them as Egyptian citizens, and its support for the Russian position does not place it into a state of dependency or make lose its independence.

With these attitudes, Egypt transcends the complex of Bashar al-Assad’s survival or non-existence, which stands in the way of a political solution to the crisis, as it sees this issue as a matter for the Syrians to decide.

Perhaps the most prominent evidence of overcoming that knot is that Egypt has secretly received over the past years the head of the Syrian National Security Bureau, Ali Mamlouk, one of the most important figures of the Syrian intelligence, more than once.

All this meant that the Egyptian position on the Syrian crisis was developing according to the stability of the political situation in Egypt, within the limits of the security framework.

10 years passing by since the outbreak of the Syrian revolution and the Assad regime still in power despite all the heavy losses that this country has incurred, regional and international powers have concluded that there is no solution to return Syria to the Syrians without the presence of the Syrian regime in the equation.

This fact, in addition to the initiative of some countries to restore relations with the Assad regime and the relative stability in the battlefields, paved the way for the regime in Egypt to develop Cairo’s position on the Syrian crisis.

The meeting of Egyptian Foreign Minister Sameh Shoukry with his Syrian counterpart, Faisal Miqdad, on the sidelines of the meetings of the United Nations General Assembly, the first of its kind between the two foreign ministers since the start of the Syrian crisis in 2011, was a qualitative shift that paves the way for what is beyond.

I think that the Egyptian administration is preparing with this meeting the Egyptian public opinion to accommodate the strategic vision of the state, which places in mind the importance of working on the unity and stability of Syria. This is valid even if Cairo is forced to deal with the Assad regime publicly, especially since public opinion in Egypt may have justified reservations that deplore the communications. With a regime that caused the displacement and shedding of Syrian blood.

Cairo believes that its interests will support this position. Egypt has never taken sides in the conflict within the Syrian people, regardless of their orientations, and it has opened its doors to its Syria’s sons as guests, not as refugees. Egypt also never used Syrians to blackmail the West or profited from their ordeal. It also supported all the popular and civil actors that championed the demands of the Syrian people.

Although Egypt so far does not possess actual cards on the Syrian arena, it has neither funded nor armed the opposition, and it has not taken in part in open financing of oppositional activities – unlike some Arab and non-Arab regional countries. It is not arming and or supplying the opposition with ammunition or money. Nor, at the same time, did it support the regime’s crimes against its own people in any way. However, this point in particular may be a positive factor that nominates it to play other roles in the solution.

Therefore, its recent public contact with the Assad regime, and the subsequent visit of Russian Foreign Minister Sergey Lavrov to Cairo, means that Moscow, the main supporter of the Assad regime, sees a role for Egypt in any future solutions to the crisis.

Egypt’s moral position during the past years in the Syrian crisis can be the basis for a more active role Cairo is preparing to play, and Shoukry’s meeting with Miqdad is only an opening scene.