Crimean Platform in Ukraine’s Relations with the West 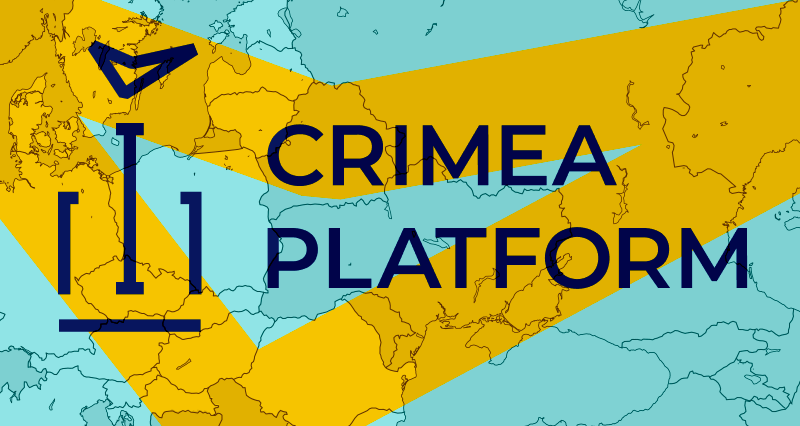 This year Ukraine – like the other former Soviet countries – commemorates the 30. anniversary of independence. During the celebrations at the end of August (23-24 August), another important event took place: The first summit of the Crimean Platform. This initiative, led by the Ukrainian President Volodymyr Zelensky, aims at raise the Crimean Question on the global agenda.

As it is known, in February 2014, a revolution occurred in Ukraine, which was initiated by pro-Western groups. The revolution resulted in the toppling of the then Ukrainian President Viktor Yanukovych, who had to escape to Russia, and brought pro-Western groups to power. However, the Russian administration had refused to recognize the new government in Kyiv, calling those incidents a US-supported “coup d’etat”. The Russian Government was especially anxious for Crimea: The Russian Black Sea Fleet has been based in the naval base in Sevastopol in Crimea since the end of the 18th century.

Significance of Crimea for Russia

A look at a map of the Black Sea Basin clearly shows the great geopolitical significance of the Crimean Peninsula: It is almost at equal distance to the western and eastern parts of the Black Sea. It controls the estuary of the Danube River and the exit of the Istanbul Strait to the Black Sea. It is also not very far away from the Caucasus (during the Five Days War between Russia and Georgia in 2008, the battleships based in Sevastopol had played a key role). In this aspect, the Sevastopol Naval Base is of vital importance for Russia and no other port in the Black Sea can offer Russia’s Black Sea Fleet similar convenient conditions. This explains, why Russia for the last 200 years attached great importance to the Crimean Peninsula and why during the Second World War it displayed an insistent resistance against the Nazi forces in order to defend Crimea.

During the 1990s’, many Russian politicians (including the spokesmen of the President Boris Yeltsin and the Russian Parliament) expressed their dissatisfaction with the fact that Crimea remained within Ukraine. But the partition of the Black Sea Fleet and the status of the naval base in Sevastopol was a more urgent question then. These questions brought the two countries on the brink of a serious diplomatic crisis and ultimately in 1997, they agreed upon the partition of the Black Sea Fleet between the two countries. It was also agreed that Russia would use the naval base in Sevastopol on the basis of a rent agreement. The term of the agreement would be 20 years. However, in 2010, according to the agreement, concluded by the then Ukrainian and Russian presidents Viktor Yanukovych and Dmitry Medvedev, this stay was prolonged for an additional 25 years.

The pro-western and anti-Russian political circles in Ukraine were dissatisfied with the stay of the Russian Fleet in Crimea. In addition to their dislike of Russia, they advocated for the NATO membership of Ukraine, and the presence of a naval base of a non-member country would be an obstacle for Ukraine’s NATO membership. For this reason, they were advocating to cancel the agreement, or, at least, not to extend it. When the pro-Western politician Viktor Yuschenko became president of the Ukraine as a result of the Orange Revolution of 2004, he made it clear that they would not like to extend the agreement (however, he could not be elected for a second term and had to hand over presidency to Viktor Yanukovych in 2010). When Yanukovych signed the agreement that prolonged the stay of the Russian Fleet, this caused a great turmoil in Ukraine’s parliament. For those reasons, when the pro-western forces made a revolution in February 2014, Russia had concrete reasons to fear that the new government would seek to abolish the current agreement and dismiss the Russian Fleet. Thus, the Russian Government decided to act before the new government in Ukraine would begin to function in full force. The Russian forces based in Sevastopol, having received the support of the great part of the local population (most of whom are ethnic Russians), took control of the peninsula at the end of February, beginning of March of 2014 and they organized a referendum concerning the status of Crimea and the city Sevastopol. The laws of Ukraine did not allow such a referendum and the international community did not recognize it. However, the Crimean Parliament, based on this referendum, first declared the independence of Crimea from Ukraine and soon afterwards announced the “reunion of Crimea with Russia”. Russia, in this way, annexed the Crimean Peninsula and the city Sevastopol on 18 March 2014.

Although this referendum and the subsequent annexation was not recognized by the international community, Russia considers Crimea as a part of its own territory and the legal amendments in 2020 completely banned any discussion in Russia concerning the status of Crimea. In other words, discussing the status of Crimea in Russia is associated with separatism. Russia also refuses to negotiate this issue in international platforms, claiming that Crimea is now a part of its territory and considers that question to be closed for all.

The attitude of the West

During the turmoil and the subsequent revolution in 2014, the Western states had rendered open support to the pro-western opponents in Ukraine. The demonstrations in Kyiv were also being held under the EU flag and the protestors had set the EU membership as one of their main tasks. High-level US politicians and statesmen, including Victoria Nuland, visited the demonstrations of the pro-western protestors, though these gatherings were banned by the then Ukrainian administration. However, after the revolution, when Russia organized its operation in Crimea, Western states (both the European states and the US administration) did not give any concrete support to Ukraine. Moreover, it was said that the Western leaders called the Ukrainian soldiers in Crimea not to cause any conflict. Soon after the annexation of Crimea, the then US President Barack Obama said that this situation would not cause a new Cold War. It was apparent that, the Western leaders ignored this question at the most crucial moment (the former US President Donald Trump harshly criticizes Barack Obama for his “surrender”).

This was the main motivation, why the Ukrainian statesmen initiated this Crimean Platform. The first motive was prevention of Crimean Question from being forgotten. The second reason might be an internal reason: The present Ukrainian President Volodymyr Zelensky, who came to power 2 years ago, had been accused by many nationalists (especially by the supporters of the former president Petro Poroshenko) for being “pro-Russian”. Many leaders of the Crimean Tatar movement had also participated in the parliamentary elections in many political parties, but not in the party of Zelensky. From this point of view, this platform might be considered as an opportunity for Zelensky to demonstrate his “patriotism” (his supporters say that while Poroshenko did nothing on the Crimean Question, it is Zelensky, who brought this question to the agenda of the international community) and an opportunity for establishing good relations between Zelensky and the leaders of Crimean Tatars.

The initiative for Crimean Platform

The Crimean Platform was announced first at the second half of last year (At the 75 annual summit of the United Nations). The Ukrainian Government was planning to create an international platform where the Crimean Question might be discussed and the additional sanctions against Russia would be adopted. It was planned that such a platform would be under the auspices of the United Nations. Since last year, the date of the first summit of the Crimean Platform was announced twice, however, in both cases, the Ukrainian Government postponed the date.  Finally, it was announced that the summit would be held on the eve of the 30th year anniversary of independence. Ukrainian diplomats spent great efforts to organize a real summit, where many states would be represented by their presidents or head of governments.  However, the Russian administration from the beginning, demonstrated that it had no intention to tolerate this platform. The spokesperson of the Russian Ministry of Foreign Affairs Maria Zakharova announced that Russia would perceive participation of the states in the Crimean Platform as a non-friendly act. Consequently, many of the countries (such as Latin American, African countries as well as India and China) completely ignored the summit. Of the countries, which sent a delegation, 9 were presented by their presidents (such as Poland, Estonia, Latvia and Lithuania, which have the worst relations with Russia), 4 countries were represented by prime ministers (Sweden, Romania, Croatia and Georgia), and many of them were presented by their foreign ministers or trade or energy ministers. Those European countries like France and Germany, which did not like to harm their relations with Russia, were represented at a relatively low level: France was represented by its trade minister, while Germany was represented by its energy minister.

At the beginning of the summit, the Ukrainian President Volodymyr Zelensky stated in his speech that it would be impossible for Ukraine to gain back the control of Crimea solely with its own occasions and reiterated that it was essential to gain the support of the international community for de-occupation of Crimea. However, the final declaration of the summit became much softer than the Ukrainian diplomats expected: Instead of mentioning concrete additional sanctions, the declaration was full of some general expressions, such as, “the aim of the Crimean Platform is ending the temporary occupation of the Crimean Peninsula with peaceful means and “reestablishing the sovereignty of Ukraine on Crimea in full conformity with international law”.

One of the achievements of the platform is opeing a permanent office of that platform in Kyiv. President Zelensky says that the platform will soon open offices in some other countries.

The outcomes of the summit

So, what are the outcomes of the first summit of the Crimean Platform? For one point of view, the fact that 46 countries were represented in this summit, 9 of them (excluding Ukraine) were represented by presidents and 4 by their prime ministers shows that the international community has not forgotten the Crimean Question. This is something, which would annoy Russia, who claims that this matter is closed forever. The fact that this organization will held further summits and will have a permanent office also shows that there will be a systematic approach on this question. On the other hand, the fact that many European countries do not wish to damage their relations with Russia and that even the new US President Joe Biden has already disappointed the Ukrainian administration (for removing sanctions on the North Stream-2 project of Russia, according to which Ukraine will lose its status as a transit country in the sphere of gas), shows that it would be a too optimistic approach for Ukraine to expect a real cooperation with the western countries on this question.

Ukraine’s disappointment with the West

The Foreign Minister Dmytro Kuleba expressed the disappointment of Ukraine with the West, last month, when he said that Ukraine does not believe in the promises of the West anymore and that concerning its own security problems, the country should rely on its own power, just like Israel. One of the factors of disappointment of Ukraine with the West is the lack of this concrete support on Crimean Question. Consequently, the fate of the Crimean Question will largely depend on the relations between Russia and the West.