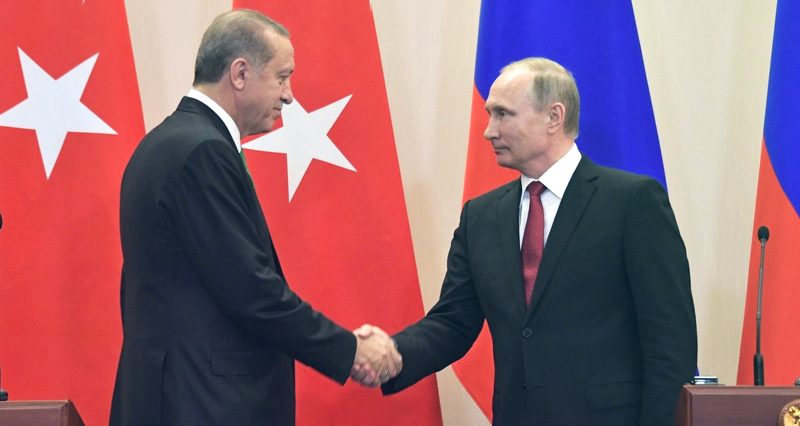 The summit in Sochi once again proved that the interests of Russia and Turkey coincided in most areas, said Mehmet Perinçek in the interview with the Russian newspaper Vzglyad. According to him, both countries are now confronting the aggressive behavior of the United States in Syria, so Moscow and Ankara have no other option but a strategic partnership.

Hints on the agreement for a joint strategy in Syria

In Erdogan’s statements following his conversation with Putin, Perinçek saw a hint that the leaders had agreed on a common strategy to combat terrorists in Syria.

“Our countries have a primary task: to get rid of radicals who seek to violate the territorial integrity of Syria. These are two groups of terrorists – fundamentalists in Idlib and separatists in East Euphrates, that is, the Kurdistan Workers’ Party and other forces supported by the United States,” the expert explained to the Russian newspaper.

“Erdogan’s statements after the meeting in Sochi prove that the Turkish leader is aware of the importance of cooperation with Russia. Our partnership will deepen with the use of different schemes – in Libya, in the Caucasus, in the Eastern Mediterranean”, predicts Perinçek.

“To begin with, it is worth emphasizing that the interests of Turkey and Russia completely coincide. Both countries suffer from the threat of US aggression, they have no choice but to cooperate and create a strategic partnership. Therefore, Moscow needs Ankara as much as Ankara needs Moscow. And these countries can solve their problems in security or economy only in cooperation with each other.”

“Instead of discussing different problems separately, this time the leaders agreed on a common strategy”

“Of course, in different regions there are different problems, different agendas, different schemes and different models of cooperation. If Turkey and Russia have a common strategy against the American aggression and in favor of peace and prosperity, the stabilization in the region, then it is possible to solve any problems at the points of crisis on the Karabakh, Syrian, African, Black Sea and Cypriot issues. Therefore, it was important to define a common strategy and a common roadmap for Russian-Turkish cooperation. I think this meeting was important in this regard. If both leaders discussed different problems in earlier meetings separately, then this time, they agreed on a common strategy,” he said.

The political scientist noted that during this and subsequent meetings, both leaders do not need to bargain, for example, the Turkish side giving in on Idlib, and the Russian side giving in on Turkey in the Eastern Euphrates or Cyprus.

“Their interests coincide in all regions and in all matters. The main principle of cooperation between the two countries is to ensure the territorial integrity of Syria. And both countries need to eliminate the forces that violate the territorial integrity of this country. And this does not mean a concession to the other, because the elimination of those forces is in the interest of both countries.

Cooperation in the defense industry

Another important topic was the cooperation in the defense industry. Turkey is itself a NATO member, but in practice it has become the alliance’s de facto target. Turkey has problems with the United States, a confrontation that is not temporary and does not stem from a misunderstanding. This is a strategic conflict. As long as the United States does not abandon its plans in our region, this confrontation will continue. Therefore, in case of possible conflicts with NATO, with the United States or with the US allies, Turkey will not be able to use armed systems dependent on NATO. Hence, Turkey needs independent armed systems and the purchase of the S-400 was of great importance.

Now Putin and Erdoğan are talking about the joint production of different armed systems and engines for fighters. The countries are going to build two more nuclear power plants in Turkey. All these decisions of this meeting prove the strategic perspectives of Russian-Turkish relations”, concluded Mehmet Perinçek.

UWI expert and Turkish political scientist Onur Sinan Guzaltan analyzed the summit in his comments to Ukraine.ru, evaluating both the public presentation and aspects behind the scenes.

“Ankara and Moscow adopt an approach that emphasizes shared values”

“Based on the statements at the Sochi meeting, Ankara and Moscow do not want their relationship to be ruined and want to adopt an approach that emphasizes shared values rather than differences. Contrary to the expected, the disagreements on the issues of Crimea and Idlib were not touched upon in press releases”, Güzaltan said.

But, naturally, these topics will be brought up in a personal conversation. The presence of the director of the Turkish National Intelligence Organization (MIT) in the Turkish delegation also shows that the parties will discuss Syria and Libya in detail. And there are points of contact here.

“Personally, I think that if Russia takes a clear position against the US-backed terrorist organizations such as the PKK / PYD / YPG, and if a common solution to the refugee crisis can be found, Turkey’s position on Idlib can be softened,” Güzaltan told to the Ukraine.ru.