Syrian professor Abdullah: “The Syrian and Turkish armed forces must struggle together” 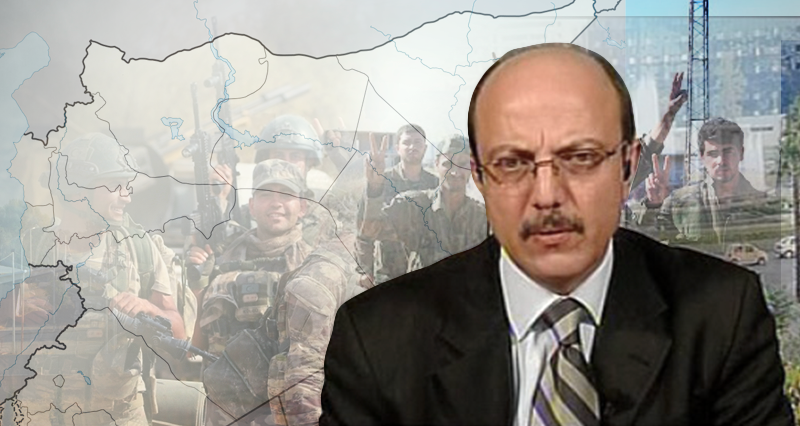 The Syrian professor Bessam Abu Abdullah spoke in a live connection to the Turkish TV Channel Ulusal Kanal on the actual situation in Syria. Abdullah said “What needs to be done in Syria is: The Syrian Armed Forces and the Turkish Armed Forces must declare their will to fight jointly against all kinds of terror organizations.”

Being connected from Damascus to the program, Abdullah answered a range of questions, from a possible new wave of refugees from the Idleb province towards Turkey, the economic and social future of those Syrians that return to their homeland, the struggle against the PKK/PYD and other terror organizations as well as the path to normalize Turkish-Syrian relations.

Abdullah said that Turkey needed to repair its relations with Syria in order to be able to fight the terror groups in the East of Syria effectively. Concerning a possible new refugee wave from Idleb towards Turkey, Abdullah pointed to the example of Daraa, where Syrians fleeing from terror organization and seeking refuge with the Syrian army could return safely to their families on condition of regularly appearing before security institutions and providing signatures. Answering a question on the Syrian refugees returning to their homeland, Abdullah stated “Independence first!”

In regard to a migration crisis in Idleb, Prof. Abdullah stated the following: “I read an article by Burhanettin Duran printed in a pro-government newspaper in Turkey. He claims that one of the aims of the Syrian army in Idleb is to push ten thousands of refugees towards Turkey and to force them to cross the border. This claim is baseless and not true. It is very important to inform the Turkish public opinion about the realities on the ground in Idleb. Among the armed terror organizations in Idleb, there are a great number of foreign fighters. We know that especially lots of foreign fighters from Uighur, Chechen origin and from other countries of the Caucasus and Central Asia are fighting within the ranks of these organizations. There are also Syrians opposing these organizations of foreign fighters there.

Once the population of Idleb, which is an important part of the Syrian people, is liberated from these foreign fighters and their organizations, it will live in peace with the Syrian state and army. I would like to all to attention that during the 4 years before 2015, there were already clashes in other regions of Syria, while the city of Idleb was under control of the Syrian army. These foreign fighters were transferred to that region essentially after the fall of Idleb city. Therefore, the operations in the Idleb province against these terror organizations, which threaten both Syria and the region, will be pursued with full determination.”

“Same military operation in Idleb as in Daraa”

Professor Abdullah continued on Turkish TV: “The Syrian Army’s planned operations in Idleb can be compared to those military operations already realized in Daraa. Whatever the Syrian state and army did in Daraa, it will do the same in Idleb too. When the Syrian army surrounded the terror groups in Daraa, these became aware that their only chance to survive was to surrender to the Syrian army and the Syrian state. Back then, a lot of propaganda was made that, when these terror groups laid down their arms and surrendered, they would be massacred by the army or tortured. None of that happened. The militants of these terror groups surrendered, laid down their arms, signed agreements and returned to their homes. At the end, the state is obliged to hold its promises in order to provide predictability to its citizens. Different people had joined these terror groups for very different reasons. Once they saw that the army and the state welcomed them with open arms, these people, who are citizens of the Syrian Arab Republic, made their peace with the Syrian state. The same can and will be done in Idleb as well. But in this province, there is a difference: In Idleb, there are foreign fighters.”

Professor Bessam abu Abdullah also spoke on the perspectives of Syrian refugees when returning home. He stated the following:

“Syria is not under US embargo since 10 years. It has been targeted by Washington’s economic blockade before that, too. A state needs to think about a plan and program, how to fulfill the basic and economic needs of its citizens, when these return home after they had to leave the country. This will definitely lay another economic and financial burden on the Syrian state. But the first and elementary step to provide an economic perspective to our citizens consists in the elimination or expelling of terror groups and foreign forces on our soils.

Syria is today not the first time targeted by international sanctions and embargoes. In spite of having been targeted before too, Syria has been capable to make serious advance in both industry and agriculture, because it was independent.

The Syrian economy can revive, factories work again and agriculture start producing again only when the occupation on Syrian territory is ended and the terror groups that support it are eliminated. No state and no government on earth can focus on topics like economy and industry, as long as part of its territory is under occupation. The most important topic it will focus on will be to liberate the country from foreign occupation forces and the terror groups which support these.”

The struggle against the PKK

Abdullah said that the presence of the PKK in the East of Syria was consequence of Turkish policies, reminding the Adana Agreement between Syria and Turkey. He stated: “In 1998, a Security Agreement between Turkey and Syria was signed in the city of Adana. With this treaty, both countries agreed to fight jointly against the PKK, to share intelligence, to execute joint military operations and to allow the Turkish National Intelligence Organization (MIT) to open offices and make operations on Syrian soil. The agreement was fulfilled to the letter. Both countries realized important operations against the PKK. Hundreds of PKK fighters were handed over to Turkey, and during those times, the PKK ceased to be a threat to Turkey.

If we have to state unfortunately today the presence of PKK forces in Syria, we have to point to the negative role Turkey has played in the context. If today the PKK has a presence in the East of the Euphrates in Syria, than we have to remind the contributions Turkey has made to this fact. If Turkey had acted together with Syria against terror groups in the past 10 years, than we would not be discussing the current picture but deep and productive, bilateral military relations.

But unfortunately, when the Syrian state weakened, when a full-scale attack on Syria started, when thousands of terror group militants were carried to Syria from all over the world, the PKK found a very futile environment to spread and to work. It has gained the experience to establish its own institutions.

The Syrian army meanwhile was forced to retreat from these border regions, because it was under attack on all sides. Therefore, it was forced to build its defense lines in the city centers. Terror groups filled this void in the frontier regions. One these terror groups was the PKK.”

“Federal, confederative or autonomous notions are not permitted”

“The Syrian state and the Syrian President Bashar al Assad have been very clear: No separatist activity of federal, confederative or autonomous notion, which divides the Syrian nation and constitutes a different sovereign that the Syrian nation will be permitted. The struggle against foreign occupation forces may have endured since 10 years, it may endure a 100 years more, but Syria will not allow the presence of any armed group on its territory besides the legitimate armed forces of the Syrian state. The Syrian constitution has very clear provisions that provide all rights to minorities and ethnic groups. Speaking about the cultural rights of our Kurdish brothers and sisters is one thing, but the establishment of a military authority distinct from our nation is unacceptable.”

“Turkey must speak to Syria”

“States must develop policies in accordance with the strategic interests of their people. Accordingly, Turkey is trying to establish today a dialogue with the UAE, Bahrain, Egypt and other regional countries, but it is not talking to Syria, although Damascus is Ankara’s geopolitical door. Without entering into peace with Syria, Turkey will not be able to establish healthy relations with Egypt, Syria’s neighbors or other countries of the Arab world. In the last 10 years, Syria has displayed a strong will and a decided fight against terror groups. Several countries recognize and respect this will and this fight today. Countries like the UAE, Egypt and Saudi Arabia are spending efforts to meet again with Syrian authorities, to reestablish diplomatic relations and to reintegrate Syria into the Arab League. Turkey must understand this process well. The country needs to understand very well the changing conjuncture.

The Turkish side should also know that in this changing conjuncture, the US wants to lift the embargo against Syria step by step and elaborate certain matters with Damascus directly.

While the US and other countries observe and acknowledge this change and thus reposition themselves accordingly, the Turkish AKP government is still misreading the situation due to ideological stubbornness, sectarian obsessions or the weight of the organizations, whose responsibility it has carried the last 10 years. And as it misreads the situation, it still cannot take the according, necessary steps. It is necessary to learn from past mistakes and pursue activities to the benefit of the two nations. It is wiser to think about how to better the situation instead of being stuck in the past.”